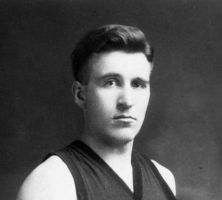 "In the early 1920s, "Andy" Anderson established himself as an extremely versatile student-athlete, excelling in basketball, baseball and football. As a captain of three Valpo basketball teams from 1921-24, he helped lead the Crusaders to a 54-16 record. The 1923-24 team compiled a 24-4 record, which included a school-record 22 straight victories.

An outstanding baseball talent, Anderson served as Valpo's starting catcher for three seasons. In 1923, he led the Crusader baseball team to the conference championship, posting a 9-1 record. On the football field, Anderson played quarterback and defensive end, while handling most of the punting duties.

After leaving the University, he coached at Key West (Fla.) High School from 1926-1929. Having earned a Bachelor of Science in civil engineering, Anderson worked as a civil engineer from 1929-1970. Most of his engineering career was spent working for the Department of Navy's Bureau of Yards & Docks. A war veteran, Anderson served the United States in France during World War I from 1917-1919 before attending Valpo.