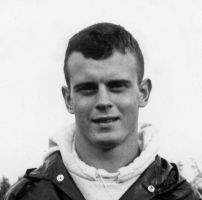 "A multi-talented student-athlete, Bill Harbeck excelled in three sports at Valpo and distinguished himself as a legendary high school track and cross country coach. A standout athlete in cross country, track and wrestling, Harbeck was named Valpo's Most Valuable Wrestler in 1964 and earned the school's honor award for wrestling in 1966.

A four-year letterwinner in all three sports, he was the recipient of Valpo's All Sports Award in 1967. After graduating from Valpo in 1967 with a Bachelor of Science in physical education, Bill began his lengthy coaching career guiding the track and cross country programs at Wheeler High School just outside Valparaiso through 1968. Harbeck earned a Master of Arts from Ball State University from 1969-71 before serving as track and cross country coach at Charleston (Ill.) High School from 1971-75.

It was his next move that resulted in Harbeck becoming one of the most renowned names in high school track and cross country. Since 1975, Harbeck built MacArthur High School in Decatur, Illinois into one of the state's most successful programs.

Bill was inducted into two other halls of fame â€“ the Illinois Track & Cross Country Coaches Association Hall of Fame in 2003 and the Decatur Athletic Hall of Fame in 1995. A six-time Southern Illinois Track & Cross Country Coach of the Year, Harbeck was the Illinois nominee for national coach of the year on two separate occasions. Valparaiso University honored Harbeck in 1994 with an Alumni Achievement Award.