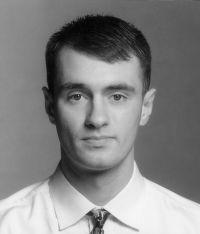 The evolution of Valpo's championship legacy in men's basketball began when David joined the program. A tremendous scorer, Redmon enjoyed a three-year career with Valpo after transferring from Arkansas-Little Rock.

A local product from Valparaiso High School, David was selected as the Mid-Continent Conference Player of the Year in 1995 after helping the Crusaders to their first Mid-Con title. As a junior, he was a key part of the first Valpo squad to win 20 games at the Division I level. A First Team All-Mid-Con performer in 1994 and 1995, Redmon ranks among Valpo's all-time scoring leaders with 1,470 points. He also stands among the school's all-time leaders in field goals, field goal attempts and 3-point field goals. In 1993-94, his first year at Valpo, David was named to the Mid-Con All-Newcomer Team.

After graduating from Valpo in 1995 with a bachelor's degree in sports management, Redmon played professionally in Poland for two years. He was named most valuable player both years and voted as the best athlete in the city of Stalowa Wola. David has been the owner of a sports restaurant in Illinois.