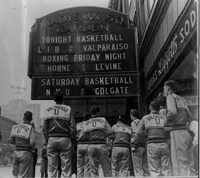 In the early 1940s, Valparaiso University gained international recognition for having the "world's tallest team."  The most successful of these teams, coached by Loren Ellis, was the 1944-45 squad that finished with a 21-3 record.

The Ellis era (1941-47) featured extensive travel for Valpo teams as the Crusaders journeyed to Puerto Rico and played opponents in numerous areas around the continental United States.

Valpo's team was featured on Armed Forces newsreels and in a famous photo in front of Madison Square Garden.

The 1944-45 team began the season with an 11-game win streak, and finished the campaign with a 10-game streak.