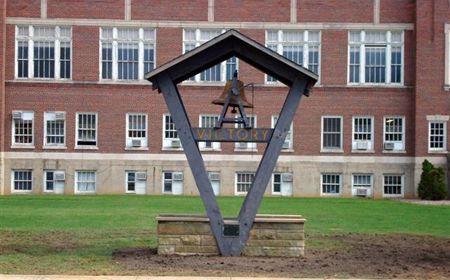 The victory bell now has a new home.
The bell being driven down Union Street.

Sixty years after the original victory bell made its way onto the Valparaiso University campus, the current bell has a new home, just in time for Homecoming.  The bell, which has been anchored outside the old Valparaiso Union since 1955, is now housed outside the west side of the Athletics-Recreation Center.

The victory bell was originally suggested by a Valparaiso University student in 1948 as a new tradition for the school.  A plea for a bell went out to the community, and the original bell was a gift to the university.  The 28-inch bell had been found on a farm after previously being used in the downtown Valparaiso fire station.

The first victory bell was portable, and drug through the campus on a cart.  It first made an appearance November 5, 1949 following a 21-13 win over Wheaton at Brown Field.

In 1955, director of athletics Karl Henrichs suggested putting the victory bell in a frame in front of the Union.  With funds from the Fort Wayne Sportman Club, which was supporters of Crusader athletics, the new frame and bell was installed in December of 1955.  A gift from Dr. and Mrs. Oliver Graebner, the new bell came from the MessiahEvangelical Lutheran Church in Chicago, and has been housed there ever since.

Last Wednesday, September 30, the bell at the Union was excavated to begin the process of moving the bell.  The bell, and concrete base, weighed around 38,000 pounds, and was banded to iron beam supports for transportation.  The bell itself was actually cradled by the beams, and not attached in any way.  By Friday, a police escort led the procession down Union Street and it was lowered into its new hole outside the ARC.  Once leveled, a new concrete foundation was poured, and the bell had its new home.

The bell is now ready to be rung following the Homecoming game against San Diego on Saturday afternoon.