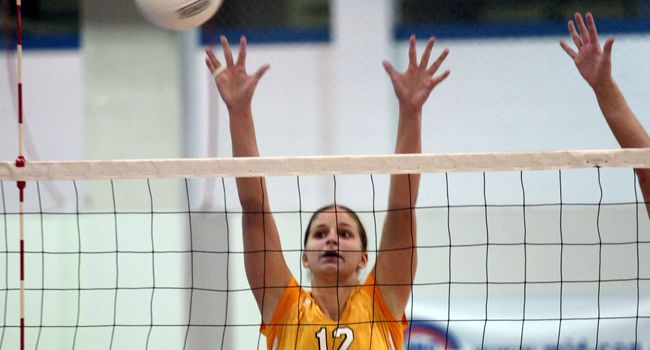 Lauren Moulton is one of six to be inducted this year into the Valpo Athletics Hall of Fame.

The Valparaiso University Athletics Hall of Fame will induct six new members on Feb. 4 as part of the Class of 2012.  This year’s class consists of Katie Bova, Homer Drew, Dr. James Malayter, Lauren Moulton, Tom Smith, and Russ Steinbeck, and will be the 15th since the Hall of Fame began in 1998.

Bova, a volleyball player, was twice named the Mid-Continent Conference Setter of the Year and was a two-time First Team All Mid-Con selection.  The 2004 Mid-Con Tournament Most Valuable Player, she ranks third all-time on Valpo’s career assist list and is seventh in school history in digs.  She helped lead the Crusaders to three NCAA Tournament appearances.

Drew won 371 games on the bench for Valparaiso in men’s basketball, coaching the Brown and Gold for 22 seasons.  A 10-time Coach of the Year honoree, he led the Crusaders to nine postseason appearances, including seven trips to the NCAA Tournament.  He was honored with the Mid-Continent Conference’s Award of Merit in 2002.

Malayter played football for the Crusaders from 1962-1965, but was better known as the department’s team physician.  A member of Lakeshore Bone and Joint Institute since 1978, he became Valpo’s team physician in 1990, a position he held until retirement in 2008.

Moulton played volleyball with Bova on the three NCAA Tournament teams and was the 2004 Mid-Continent Conference Player of the Year.  Twice a First Team All Mid-Con selection in addition to earning Second Team accolades, she ranks fifth all-time at Valpo with 1,195 career kills. She is the school record holder with a .280 hitting percentage and ranks fourth all-time with 404 career blocks.

Smith played basketball for the Crusaders, earning Honorable Mention All-Indiana Collegiate Conference honors in 1966, before moving on to a very distinguished coaching career.  As a player he averaged 14.3 points per game and was the team Most Valuable Player as a senior while leading Valpo to the NCAA regional.  The Crusaders’ head coach from 1980-1988, he has gone on to win more than 600 games during his 37 year career.

Steinbeck was a First Team All-America selection on the baseball diamond in 1966.  He led the Brown and Gold to a pair of NCAA Tournament appearances as well as three Indiana Collegiate Conference titles.  A two-time First Team All-ICC pick, he led the team batting .367 during his All-American season while also scoring a team-best 23 runs.

The Valparaiso University Athletics Hall of Fame Induction Banquet will be held on Saturday, Feb. 4 in the Community Room of the Christopher Center on campus.  The banquet is slated to begin at 3:30 p.m.  The cost of the banquet is $30 per person for the buffet dinner and reservations can be made by calling Sharon Jackson at 219.464.5471 or 800.803.7184 ext. 72.  The deadline for making reservations is Jan. 27.  The inductees will also be recognized at halftime of the men’s basketball game played on the same day.