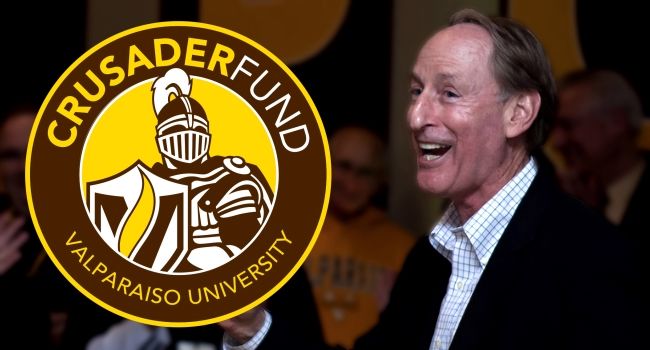 Since his retirement as men’s basketball head coach in 2011, Coach Drew has remained involved with improving Valpo’s athletic programs, and this role strengthens that involvement.  The all-time victories leader in Crusader basketball history, Coach Drew led Valpo to prominence for the first time since its move to Division I, averaging nearly 20 wins a season and making nine postseason appearances, including a run to the Sweet Sixteen in 1998.

“His contributions to Valpo athletics over the last 24 years are unsurpassed,” said LaBarbera.  “It is appropriate that Homer leads the Crusader Fund as we expand its programming to better support our student-athletes.”

Known at various times in the past as the Gauntlet Club and the Crusader Club, the Crusader Fund enhances the student-athlete experience at Valparaiso University through private contributions.  It supports all 19 of Valpo’s intercollegiate athletic teams with additional resources to help them meet their goals in competition, classroom and community.

In 2012-13, more than 770 households from 37 different states gave in excess of $340,000 to support Valpo Athletics.  These numbers represent a significant year over year increase from 2011-12, a first in five years.  At the same time, Valpo’s student-athletes turned in some of their best performances in recent memory.

The men’s basketball team returned to the NCAA tournament for the first time since 2004, men’s golf won its first conference championship since being re-established on campus and baseball and softball both won Horizon League championships and games at NCAA Tournament regionals.

In the classroom, six teams were recognized by the NCAA for ranking in the top 10 percent of all Division I teams for their academic performance, while more than 120 individual student-athletes were recognized for cumulative GPAs greater than 3.25 during their time at Valpo.

This year, the Crusader Fund strives for continued growth to help Valpo’s student-athletes reach new competitive heights while maintaining high achievement in the classroom.  This plan for growth begins with the naming of Homer Drew as the Fund chair for this year.

“I am excited to be working with the Crusader Fund to help support the tradition of athletic and academic excellence that I and the other coaches have worked hard to develop over the years,” Drew said.

New this year are four Crusader Fund Recognition Levels to help better steward donors who go above and beyond with their support for Valpo Athletics.  Supporters at each level will have exclusive benefits, including access to priority parking and hospitality areas at men’s basketball games.  More information about the Crusader Fund, including a video from new Chair Homer Drew, is available online at www.valpocrusaderfund.com.