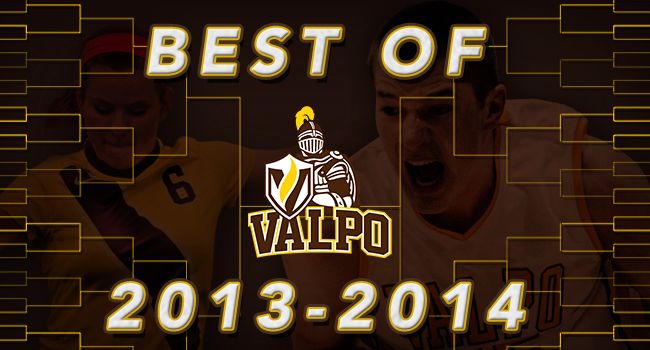 - Just three days after devastating tornadoes hit his hometown of Washington, Ill. and two days after he visited to assist in recovery efforts, freshman Alec Peters delivered one of the top performances by a freshman in program history.  Peters scored 30 points on 10-of-15 shooting, hitting seven 3-pointers along the way in the Crusaders’ come-from-behind effort.  Peters’ 30 points were the most by a Valpo freshman since Raitis Grafs scored 30 against Belmont on Jan. 10, 2000.

- Playing in just his second career tournament, freshman Peter Webb made his mark in the men’s golf record book multiple times.  Webb opened the tournament with a five-under-par round of 67, the best round in program history.  Tied for the lead heading into the final round, Webb would finish tied for third with a 54-hole score of 211, setting a new Crusader record for a 54-hole tournament.

- Already with one win over a major-conference team under their belts in the early season, the Crusader women’s soccer team took Brown Field against Northwestern under the lights on a Friday night and emerged 90 minutes later with a 1-0 victory, the program’s first-ever victory versus a Big Ten team.  Jordyn Ryfiak set up Kat Anesini for the eventual match-winner in the 33rd minute, while the back four kept the Wildcats at bay and Kristen Manski made four saves to preserve the shutout.

- Entering the Horizon League Championships, Sarah Drozdowski had already broken her own program record indoors in the weight throw multiple times, adding nearly five feet to her PR.  But Drozdowski had one last monster effort in her, winning the league title in the weight throw with a toss of 62’6”, over a foot better than her previous-best mark and out-pacing the second-place finisher by nearly 10 feet.  Drozdowski’s mark was the second-best in the event in league championship history.

- It was a happy homecoming in Lavonte Dority’s return to Chicago as the Crusaders rolled to a big 70-46 win over UIC.  Dority, who entered the game averaging 22 ppg over his last five games, matched that in the first half alone, capping a 22-point half with an NBA-range 3-pointer at the buzzer.  Dority ended the game with a career-best 33 points, going 10-of-15 from the floor, including 5-of-6 from beyond the 3-point line.

- The Valparaiso bowling team entered the Prairie View A&M Invitational knowing the field contained seven of the nation’s top-10 teams, and the schedule worked out to where the Crusaders faced two of the top-three teams in the country in back-to-back matches on Saturday.  First, Valpo edged out #2 Maryland Eastern Shore by a single pin, and followed up the dramatic win with a 42-pin victory over #3 Central Missouri.  It marked the first time in program history the Crusaders earned consecutive wins over such highly ranked opponents.

- The Crusader men’s soccer team came into its game at #24 Michigan State knowing they could play with the Spartans, having earned three draws in four matches vs. Michigan State under Mike Avery.  On this day, Valpo would break through.  Todd Vervynckt opened the scoring in the 23rd minute, and after MSU equalized in the 67th minute, Nick Suker responded with the match-winner 12 minutes later in the 2-1 Crusader win.  It was Valpo’s first win over a ranked team since 2008.

- Quite simply, it was the most dominating offensive performance in Crusader softball history.  On the opening weekend of the season in Buies Creek, N.C., Valpo dominated Seton Hall, defeating the Pirates by a 24-1 final score which included a 12-run third inning.  The Crusaders set new program records for runs, breaking the previous mark of 18, and hits (21) in a game, while individually, Tarah McShane posted Valpo’s first known five-hit game and Janelle Bouchard drove in a record-tying seven runs.

Football wins with goal-line stand on Homecoming over Campbell – Sept. 28, 2013

- A beautiful Homecoming Saturday afternoon at Brown Field ended about as perfectly as a Crusader fan could have imagined.  An exciting, back-and-forth football game went to OT tied at 42, and with the ball on offense first, it took Valpo just two plays to score a touchdown.  Campbell drove down and had second-and-goal on the one-yard line, but the Crusaders pushed the Camels back two yards.  Third down saw Campbell gain the two yards back, leaving a fourth-down attempt from inside the one.  The Crusader defense stood strong, stuffing the attempted quarterback sneak on fourth down to cap the 49-42 win.

- Just four days earlier, junior Mark Johnson had registered his first hit of the season.  He entered the Saturday twinbill without a collegiate home run.  But in the doubleheader against the Penguins, Johnson turned out to be the Crusaders’ offensive star.  He came up just a single short of the cycle in the opener, going 3-for-4 with three runs scored and three RBIs, including his first career home run.  Johnson then went deep again for his second home run of the day in game two as part of another 3-for-4 game.

- Junior Sharon Karungi entered the final seconds of a tie game with Toledo, one of the nation’s toughest teams to beat at home, with 13 points and 13 rebounds, but her final tallies on the stat sheet proved most important, as Karungi grabbed a Crusader miss and put it back up and in with three seconds to play to give Valpo a 63-61 win.  The win capped a 2-0 weekend for the Crusaders at the Toledo Invite, while Karungi’s putback put the exclamation point on her Tournament MVP performance.

- A record-setting season for the Crusader men’s tennis team – one which saw four players break the previous single-season mark for singles wins in a year – saw Valpo paired up against UIC to open the Horizon League Championship.  The Crusaders claimed the doubles point and won at No. 1 and No. 5 singles, but the Flames took wins at 3, 4 and 6 as the match came down to No. 2 singles.  Freshman Dave Bacalla eventually closed out an exciting three-set win, taking the third set 6-4, as Valpo earned its first main bracket win in program history at the HL tournament.

- Freshman Clay Yeo had played just three minutes over the three previous games, but against Oakland, Yeo played 25 minutes, tasked mainly with slowing down Grizzlies sharpshooter Travis Bader.  Offensively, Yeo hit three triples earlier in the game, but his fourth was by far his biggest, as with the clock winding down in a tie game, Lavonte Dority drove and kicked to Yeo in the corner.  The rookie knocked down the 3-pointer with 7.4 seconds to play, giving Valpo a 63-60 win.

- It was a total team effort for the Valparaiso women’s golf team in its second tournament of the fall season.  Led by senior Michelle Kleckner’s third place finish, all five Crusaders finished in the top-20 individually at the SIUE DoubleTree Invitational as Valpo claimed the team title.  The Crusaders overcame a three-stroke deficit entering the final round to earn the championship.   It marked the second tournament victory in program history, and the first win in a full field of teams.

- A Saturday night home match for the Popcorn Classic championship, against a Big Ten team, to maintain an unbeaten record?  No problem for the Valparaiso volleyball team, which matched its best start in program history (8-0) with a hard-fought 4-set win over Iowa to claim the tournament crown.  It was the second straight season the Crusaders defeated a Big Ten program, and Valpo’s first win over a Big Ten team at home in program history.  Morgan Beil was named tournament MVP, while Kelsey Victor led the way against the Hawkeyes with 12 kills and seven blocks.

- Freshman Justin Zosso made an immediate impact for the Valparaiso men’s track and field team in his first indoor season, breaking the program record in the pole vault mid-season.  But Zosso saved his best performance in the event for the league championship meet, clearing 15’1” on his second attempt to break his own Crusader record in the event and secure the league title as a rookie.