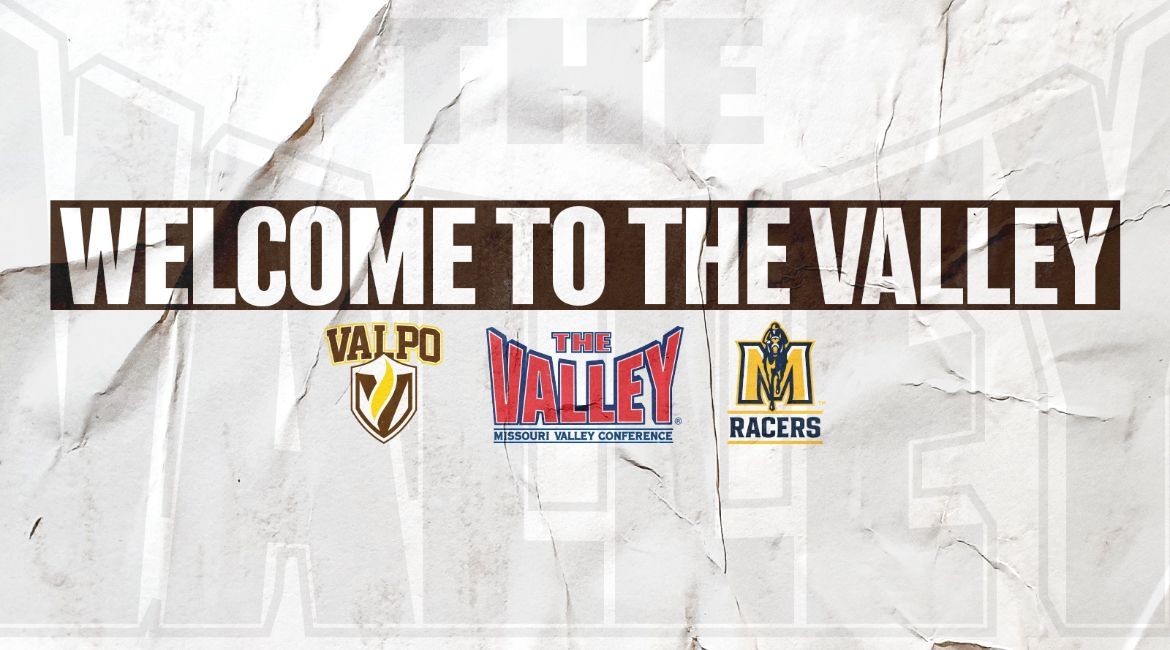 The Valparaiso University Department of Athletics has extended a warm welcome to Murray State University, which will join the Missouri Valley Conference as a member institution beginning on July 1, 2022.

“We are excited to welcome Murray State to the Missouri Valley Conference. The MVC Presidents’ Council has again successfully identified and selected a quality academic institution that is a strong geographic fit for MVC membership. Murray State’s commitment to excellence in basketball and across all sports make it a strong addition to a conference with the MVC’s history and prestige. Their membership reinforces the success and national reputation of the conference. Our teams have had several competitive matchups with Murray State in a variety of sports over the last decade, and we look forward to those becoming a regular occurrence for years to come.”

The Murray State University Board of Regents accepted an invitation from the Missouri Valley Conference (MVC) during a special meeting held at Wells Hall on the MSU campus in Murray, Kentucky on January 7, 2022.

The Murray State Racers become the 11th member of the MVC beginning July 1, 2022.

Throughout the process, Murray State officials have prioritized stable and vibrant competitive homes for all fifteen of its sports programs in order to continue its long history of success in Racer Athletics.  Given the MVC’s sports portfolio does not include football and rifle, Murray State has proactively pursued – in a collective and parallel track – league membership for football and rifle and are excited about the future.  Upon unanimous support from the Missouri Valley Football Conference (MVFC) board of presidents – a separate stand-alone, football-only conference – Murray State and MVFC officials are actively engaged in the membership process, which officially began immediately upon receipt of the MVC invitation. The nationally ranked (currently 6th) Murray State rifle program will continue to compete in the Ohio Valley Conference.

“We are very excited as we advance Murray State University and Racer Athletics into our second century,” said Murray State President Dr. Bob Jackson. “The Missouri Valley Conference is one of the premier conferences in Division-I athletics and we look forward to continuing our long record of success in this conference.”

“On behalf of our student-athletes, coaches, administrators, and staff, we are collectively honored and thrilled to join the Missouri Valley Conference,” said Kevin Saal, Murray State Director of Athletics. “Membership in this preeminent, and historically elite-performing conference, occurs as a direct result of the contributions of thousands of Racers who have come before us. Sincere thank you to our Board of Regents, Board of Regents Chair Eric Crigler, President Jackson, and many others, for their strategic and unparalleled support of Murray State University, and all fifteen athletic programs. Heartfelt congratulations and thank you to Racer Nation, whose wildly passionate support makes today and many future successes possible. The Racer Family eagerly anticipates meeting the challenges ahead with great energy, enthusiasm and passion…The Race Is On!”

“Excited for Murray State, and excited for the Missouri Valley Conference,” said Commissioner Jeff Jackson.  “Everyone is aware of the tremendous success Murray has had, especially in the sport of basketball. The Racers will be a fantastic addition to our Conference.”

“Today marks a historic new era for Murray State University and Racer Athletics as we join the Missouri Valley Conference,” said Murray State University Board of Regents Chairman, Eric Crigler. “The MVC is one of the premiere conferences in the nation and this move will benefit Murray State’s campus experience, the community, and our competitive excellence in athletics. Over 90 percent of our students and 80 percent of our alumni live in the footprint of the MVC, greatly enhancing the exposure of Murray State for student recruitment and alumni engagement. It is an exciting day for Racer Athletics!”

Murray State’s resume is full of outstanding achievements in its 97 years of collegiate competition including 136 conference championships, 127 NCAA postseason appearances (team and individual) and 250 All-America selections. Since 2010, the Racers have made 25 NCAA postseason team appearances. In the 2018-19 academic year, the Racers finished in the top-100 of the Learfield IMG College Director's Cup (out of 356 institutions nationally) after having earned the league commissioner’s cup scoring the highest point total in the history of the award. That year, the Racers produced a combined seven championships to win the league’s All-Sports Award with championships in basketball (M), golf (W), rifle, soccer (W), track & field (W) and volleyball (W).

"What an incredibly exciting day for Murray State University and the Murray, Kentucky community,” said MSU Men’s Basketball Head Coach Matt McMahon. “The Missouri Valley Conference is one of the premier basketball leagues in the country.  We look forward to both the opportunities and the challenges that this historic day presents.  I am thrilled for all of our former players, coaches, and our passionate fans who have remained loyal to the Racers for generations.  Lastly, I want to recognize and thank President Jackson and Kevin Saal for their vision, hard work, and commitment to make this day a reality."

“Murray State’s move to the Missouri Valley Conference highlights the commitment of our leadership to growing this university in every possible way,” said MSU Women’s Basketball Head Coach Rechelle Turner. “Racer women’s basketball is proud to be part of an athletic department and university that dares to dream big and embraces the challenges that come with becoming better each day. The concept of using challenge to grow is a cornerstone of our program, and we will be fully engaged in the work required to see that Murray State women’s basketball flourishes as a member of the Missouri Valley Conference.”

"Today is an exciting day for Murray State University, the athletics department and all 15 of our sports programs,” said Dean Hood, MSU Head Football Coach. “In addition to today's news regarding the Missouri Valley Conference, our administration is actively engaged in the membership process with the Missouri Valley Football Conference and we look forward to the journey ahead. Congratulations to Racer Nation on this important step for all our programs.  Go Racers!”

A community event will be held at the CFSB Center Monday, Jan. 10, at noon as the Racers welcome Racer Nation throughout Murray and the western Kentucky region to celebrate entry into the MVC. All fans and supporters are invited to this free event. Doors open at 11 a.m. (CT) and fans should enter the CFSB Center through Gate B. Upon conclusion of the community event, Murray State University will host a press conference in the Murray Room inside the CFSB Center where media members can ask questions of MSU and MVC administrators. Both events will be live streamed on ESPN+.

Officially licensed gear from the Murray State/MVC team shop is now available online for purchase. The sale is open through Jan. 24. after which, the orders will be fulfilled and sent. Many items are available in men’s, women’s and youth sizes. Visit GoRacers.com/MVCgear.

About the Missouri Valley Conference

The Missouri Valley Conference, the nation’s second-oldest NCAA Division I conference, continues to be a leader in college athletics and is one of the nation’s most innovative leagues, celebrating its 115th season in 2021-22. The Valley brand remains very strong, both regionally and nationally, and the great athletic tradition of The Valley remains a compelling force in recruiting student-athletes and in marketing all the MVC programs. League members have worked together to focus on common goals and objectives, placing a high value on conference harmony, while continuing to invest in athletic programs to compete at the highest level.

Located in the Jackson Purchase lake area of west Kentucky, Murray State University is a state-assisted comprehensive university that includes the Arthur J. Bauernfeind College of Business, College of Education and Human Services, College of Humanities and Fine Arts, the Jesse D. Jones College of Science, Engineering and Technology, the Hutson School of Agriculture, and School of Nursing and Health Professions. The University’s 236-acre main campus is in Murray, a city of more than 19,000 people, with regional campuses in Fort Campbell, Henderson, Hopkinsville, Madisonville and Paducah. For 100 years, Murray State has served students from the region, the nation, and the world, growing from an enrollment of 202 students to nearly 10,000 today. Murray State’s supportive faculty and staff prepares the next generation of leaders to join 75,000 successful alumni. Within the past year, Murray State has been named a “Best Bang for the Buck” by Washington Monthly, one of “America’s Best Colleges” and one of Kentucky’s “Best Employers” by Forbes, and a “Top-Tier University” by U.S. News & World Report. Recognition of the quality of Murray State programs is reflected in accreditations. Murray State has been continuously accredited by the Southern Association of Colleges and Schools Commission on Colleges (SACSCOC) since 1928 and awards associate, baccalaureate, masters, specialist, and doctorate degrees.