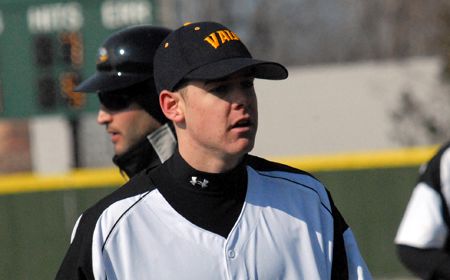 “Shafer got stronger today as the day went along,” head coach Tracy Woodson said.  “We just couldn’t get the bats going offensively.”

The Crusaders scored first in the opening inning as Matt Lenski (Milwaukee, Wis./Marquette University H.S.) homered to right, his third round-tripper of the season.

Cleveland State (9-16, 2-4 Horizon) answered in the bottom of the inning, as Brad Buell, who opened the inning with a single, and stole second, scored on a caught stealing attempt by Tom Carter at second base.

The Vikings took the lead in the third as Buell, who got on base after being hit by a pitch, scored on a groundout.  Cleveland State added an unearned insurance run in the eighth following a Valpo throwing error.

Josh Wallace (Bellefountaine, Ohio/Bellefountaine H.S.) had two of Valpo’s five hits on the afternoon while Carter went 3-for-3 to lead the Vikings.

Valparaiso (10-14, 5-4) will return to home action on Monday afternoon as the Crusaders host Robert Morris (Ill.) at Emory G. Bauer Field.  First pitch is slated for 3 p.m. with all the action carried live on WVUR (95.1-FM, Valparaiso) on online at www.valpoathletics.com.