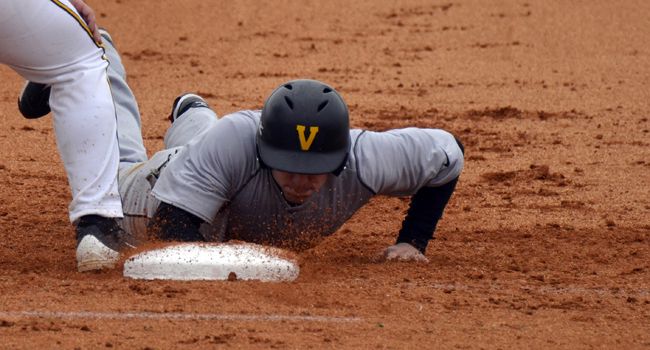 Valparaiso plated three runs in the top of the 13th inning on Saturday afternoon to post a 5-2 victory in the completion of the season opener that was suspended due to darkness before falling 2-1 in the regularly scheduled contest at Reagan Field in Murray, Ky.

With the game tied at two after 12 innings when play resumed on Saturday, the Crusaders wasted little time finishing the game.  Bobby Martin (Crystal Lake, Ill./Prairie Ridge H.S.) was hit by a pitch with one out and moved to second on a single by Billy Cribbs (Rochester, Mich./Rochester H.S.).  Steven Scoby (Delton, Mich./Delton Kellogg H.S.) loaded the bases after lifting a fly ball to center that was dropped for an error.

Spencer Mahoney (LaGrange Park, Ill./Lyons Township H.S.) grounded into a fielder’s choice, but his first collegiate RBI plated Martin with the go ahead run.  A double steal, with Mahoney taking second and Cribbs swiping home made it 4-2 Crusaders and Tanner Vavra (Menomonie, Wis./Monomonie H.S.) followed with an RBI single to center to increase the lead to three.

“We took advantage of their error and did some good things in that inning to pick up the victory,” head coach Tracy Woodson said.

Will Robinson (Placentia, Calif./Valencia H.S.) came on in relief in the bottom of the 13th and induced three straight ground ball outs to secure his first collegiate save.

“Will came in and got us three quick outs which was key for us,” Woodson added.

Vavra and Elliott Martin (Irvine, Calif./University H.S.) each had three hits to pace Valpo’s 14-hit attack in the opener.

The regularly schedule game was a pitcher’s duel in which the Racers won in the bottom of the ninth.

Valpo jumped on top in the third as Scoby and Mahoney tallied back-to-back one-out singles.  Andrew Bain (Indianapolis, Ind./Park Tudor H.S.) followed with a two-out single to right-center to give the Crusaders the lead.

Kyle Wormington (Norman, Okla./North H.S.) was strong in his first start as a Crusader.  He allowed just two hits in eight innings of work, but the Racers tallied a run in the fifth.  Mike Kozlowski led off with a double down the rightfield line and moved to third on a ground out.  A fielder’s choice off of the bat of Colton Speed plated Kozlowski with the tying run.

Wormington left after eight striking out two and walking just one while allowing the two hits.

Murray State plated the winning run with two outs in the ninth.  Dylan Wheeler led off with a double and moved to third on a ground out.  With two outs, Paul Ritzheimer singled to left-center to plate the winning run.

Cameron Finch went the distance to earn the win (1-0) for the Racers, scattering seven hits while striking out three and walking one. Mike Jacobs (Beloit, Wis./Turner H.S.) suffered the loss (0-1) for the Crusaders in relief.

“We didn’t get timely hits in the second game,” Woodson stated.  “We hit some balls hard, and I think our offense will come around given time.  We’ve pitched really well the first two days though and that’s a positive.”

Valparaiso (1-1) and Murray State (1-1) will wrap up their season-opening three-game series on Sunday afternoon at Reagan Field.  First pitch is slated for 1 p.m.

Game Notes: Valpo’s win in the opener was its first ever against Murray State … the Crusaders won a season opener for the first time since 2009 … Will Hagel (Arlington Heights, Ill./Prospect H.S.) had hits in both games and extended his hitting streak to 15 dating back to 2011 … Hagel has also reached base safely in 32 straight contests.