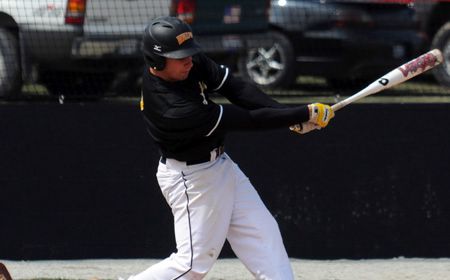 South Carolina Upstate jumped out to a 4-0 lead after one inning on the way to an 8-2 victory over Valparaiso on Monday afternoon at Harley Park in Spartanburg, S.C.

“We didn’t make a couple of plays in the first inning and got behind early,” head coach Tracy Woodson said.  “You can’t do that every day.  We’ve battled back from deficits a couple of times but not today.  We weren’t ready to play from the get go and against a good team like this you have to be ready to play.”

The Spartans tallied three straight hits to start the game and also took advantage of a Valpo error in the opening inning to plate four runs.

Valpo answered with two in the second.  Will Hagel (Arlington Heights, Ill./Prospect H.S.) and Elliott Martin (Irvine, Calif./University H.S.) led off with singles and John Loeffler (Burnsville, Minn./Burnsville H.S.) was hit by a pitch to load the bases.  Bobby Martin (Crystal Lake, Ill./Prairie Ridge H.S.) delivered a two-run single to left, making it 4-2.

“We swung the bats well in that second inning, but that was about it for the game,” Woodson stated.

Sacrifice flies by USC Upstate (10-1) in the third and fifth increased the hosts lead to 6-2 and the Spartans added two more insurance runs in the seventh.

“They are just a good hitting team,” Woodson added.

Valpo managed just six hits in the contest, five of which were off of starting pitcher Brandon Lee.  Lee went seven innings, giving up just the two runs for the win (2-1) while striking out three.  Ben Mahar (Mundelein, Ill./Mundelein H.S.) suffered the loss (1-1) for Valpo.  He worked six innings, allowing six runs, four of which were earned, on seven hits.

“We need to come out and be ready to play tomorrow,” Woodson concluded.