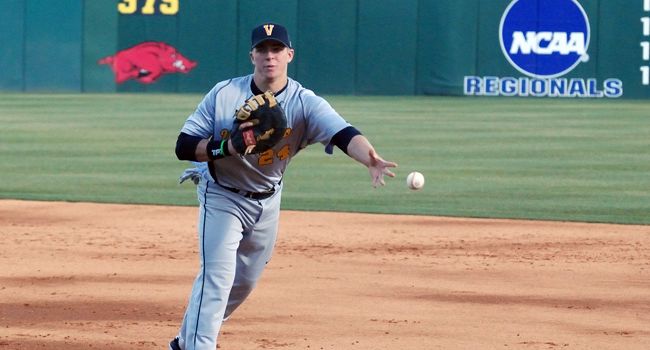 Valparaiso forced extra innings for the fourth time in its first 12 games of the season on Friday afternoon, but Campbell became the first team to defeat the Crusaders after the ninth inning, downing the Brown and Gold 6-5 in 10 innings at Taylor Field in Buies Creek, N.C.

Jake Kirkland hit his fourth home run of the season for the Camels with one out in the 10th inning as Campbell took the opening game of the three-game series.

“It’s disappointing to lose a game like this,” head coach Tracy Woodson said.  “We had a 4-1 lead and let them chip away.  We did battle back to force extra innings, but that’s little consolation.”

Campbell struck first on Friday afternoon as Josh Holskey doubled home David Olson with the game’s first run in the bottom of the second inning.

Valpo responded in the top of the third, taking the lead.  Andrew Bain (Indianapolis, Ind./Park Tudor H.S.) singled with one out, and two batters later scored on a Steven Scoby (Delton, Mich./Delton Kellogg H.S.) double down the rightfield line.  Chris Manning (Lake Forest, Calif./El Toro H.S.) followed with an infield single, plating Scoby, who had moved to third on the throw to the plate in an attempt to retire Bain.

The Crusaders added to their lead in the fourth.  Elliott Martin (Irvine, Calif./University H.S.) singled and moved to second on a two-out hit by Billy Cribbs (Rochester, Mich./Rochester H.S.).  After both runners moved up 90 feet on a passed ball, Bain delivered a two-run single up the middle to make it 4-1 Valpo.

The Camels pulled within 4-2 in the bottom of the fourth on a sacrifice fly by Holskey and took the lead in the seventh.  With two outs, back-to-back singles put the tying runs on base and Jimmy Brenneman laced a triple to right, scoring himself on a Crusader error to put Campbell on top 5-4.

Valpo immediately battled back.  Manning singled with one out and promptly stole second.  Will Hagel (Arlington Heights, Ill./Prospect H.S.) came through with the game-tying single to right, knotting the game at five and eventually forcing extra innings.

Neither starter earned a decision in the game, as each worked 7.1 innings.  Tyler Deetjen (Saint Charles, Ill./East H.S.) allowed five runs, four of which were earned, on 11 hits and struck out four without walking any Camels.  Matt Sergey also allowed four earned runs of the five he surrendered, giving up eight hits.  He walked two and fanned six.

Jarad Miller (Fort Wayne, Ind./Carroll H.S.) suffered the loss (2-1) for the Crusaders, allowing just the one home run in two innings of work.  Logan Self (3-1) picked up the win for Campbell, pitching 2.2 innings of scoreless relief.

Hagel and Scoby each extended their hitting streaks to seven straight games while Cribbs tallied a hit in his sixth straight contest.  Manning and Bain each had two hits for Valpo as part of the Crusaders’ nine-hit attack.

Michael Felton had three hits to lead the Camels as the hosts tallied 12 total on the day.

“We have to get over this one quickly and get ready to go tomorrow,” Woodson concluded.

Valparaiso (4-8) and Campbell (11-3) will wrap up the three-game weekend series on Saturday afternoon with a doubleheader at Taylor Field.  First pitch in the opener is slated for 12 p.m. CST.