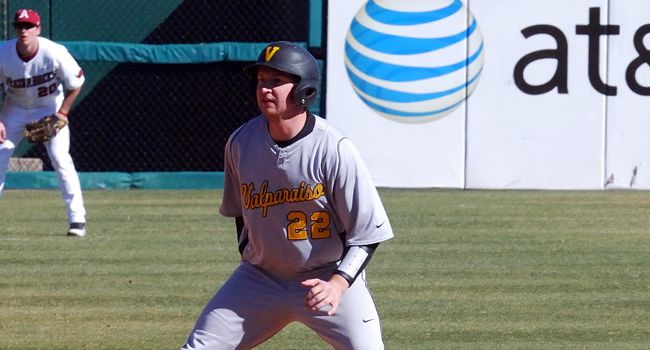 Every Valparaiso hitter had at least on hit by the fifth inning on Saturday afternoon as the Crusaders tallied 20 total in a 15-7 victory over Butler at Bulldog Park in Indianapolis, Ind.

The Crusaders scored all 15 runs in the third through fifth innings, sending 29 total batters to the plate in the three frames while registering 14 hits.

“I thought we swung the bats extremely well today top-to-bottom,” head coach Tracy Woodson said after the game.  “We told them we had to keep adding to the lead when we got it and we did just that.”

“This was big for Yoder’s confidence I believe,” Woodson added.  “He didn’t have many at bats coming in and he could be a big presence for us.”

Butler scored first with a pair of runs in the second inning on a walk, a single, a sacrifice bunt, a squeeze bunt, and a single to take the early lead.

Valpo responded in the top of the third though, plating eight runs while sending 12 men to the plate.  Cribbs scored the first run, scoring on a throwing error as Tanner Vavra (Menomonie, Wis./Menomonie H.S.) stole second.  Will Hagel (Arlington Heights, Ill./Prospect H.S.) followed with a run-scoring single to tie the game at two and John Loeffler (Burnsville, Minn./Burnsville H.S.) added a double to put two men aboard with one out.  Martin drove home both runners with a single up the middle, giving Valpo a 4-2 lead, which the Crusaders would not relinquish.

The Crusaders loaded the bases with two outs in the inning and Cribbs broke the game open with his second hit of the inning, a bases clearing double to the gap in right-center.  Cribbs scored one batter later on a Bain single and it was 8-2 Valpo after three.

The bats stayed hot in the fourth as Hagel led off with a triple and scored on a Martin sacrifice fly.  Yoder added a run-scoring single in the inning as did Cribbs and the Crusaders led 11-2.

Jimmy Risi hit a solo home run for Butler in the fourth to pull the Bulldogs within eight before Valpo tacked on four more runs in the fifth.  Vavra led off with a triple and scored on a sacrifice fly.  With two outs, Manning delivered a two-run double scoring Loeffler and Scoby and scored himself one batter later on a double by Yoder to make it 15-3 Crusaders.

Butler scored single runs in the fifth and sixth after loading the bases in both innings and added two more runs in the eighth to close the scoring.

Valpo finished the day with six extra base hits, four doubles and two triples, in posting its highest hit output of the season.

“Wild pitched well,” Woodson added.  “I think when you have to sit that long like he did a couple of times it can make it tough to pitch.  He gutted out six innings for us.”

“I told the guys 15 runs won’t be on the scoreboard tomorrow when we show up at the park,” Woodson concluded.  “We have to go back and start over and earn it again.  We had lots of energy today and we need to carry that over into tomorrow.”