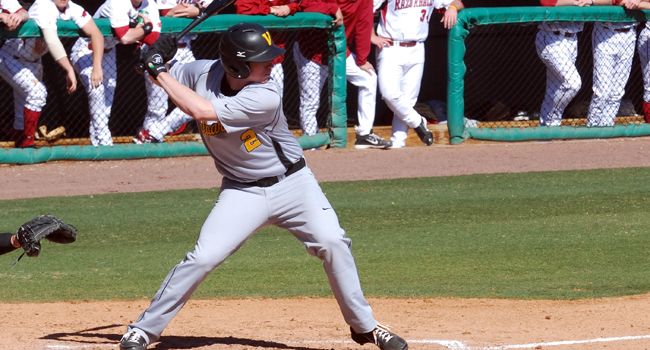 Valparaiso wrapped up its 19-game road trip on Sunday afternoon, falling 13-8 to Butler at Bulldog Park in Indianapolis, Ind.

The Crusaders took an early 6-2 lead but 10 straight runs by the Bulldogs in the fourth, fifth, and sixth gave the hosts the series win two games to one.  Chris Manning (Lake Forest, Calif./El Toro H.S.) was a home run from the cycle to pace the Crusaders offensively, going 3-for-4 with a RBI.

Valpo jumped on top quickly with three runs in the opening inning.  Tanner Vavra (Menomonie, Wis./Menomonie H.S.) was hit by a pitch with one out.  Will Hagel (Arlington Heights, Ill./Prospect H.S.) and John Loeffler (Burnsville, Minn./Burnsville H.S.) followed with back-to-back walks to load the bases, and everyone moved up on a wild pitch which plated the first run.  Elliott Martin (Irvine, Calif./University H.S.) then came through with a single up the middle to increase the lead to 3-0.

Butler answered with two runs in the bottom of the first.  Three straight singles loaded the bases to open the inning and back-to-back ground outs brought home a pair of runners.

Valpo put three more on the board in the second to increase the lead to 6-2.  With two outs, Andrew Bain (Indianapolis, Ind./Park Tudor H.S.) and Vavra singled and Hagel drilled a home run to deep right-center, his first round-tripper of the year.

“Butler settled down after the first two innings,” head coach Tracy Woodson said.  “Wormington was elevating ball and they were hit today.”

In the bottom of the second, Marcos Calderon scored from third when Griffin Richeson was caught on a delayed double steal to end the inning.

Butler took the lead in the fourth, scoring six times.  Jimmy Risi hit a solo home run and Pat Gelwicks delivered a three-run double to the gap in left-center, putting the Bulldogs on top.

The Bulldogs increased their lead to 10-6 in the fifth on a double by Marcos Calderon.  Risi added a two-run double in the sixth as Butler scored 10 unanswered runs.

The Crusaders got two runs back in the seventh with two outs.  Manning doubled to score Martin and Grant Yoder (Fort Wayne, Ind./Snider H.S.) followed with a single to bring Valpo within 13-8.

Martin also had two hits as part of Valp’s nine-hit effort on the afternoon while Calderon went 4-for-4 with two RBIs and Risi had three hits and three RBIs for the Bulldogs.

“We’re in the same spot we were to start last year, going one and two to open the year,” Woodson said.  “We need to come back from it starting next weekend.”

Valparaiso (5-14, 1-2) will finally return to Emory G. Bauer Field for the home opener on Friday afternoon, hosting Milwaukee.  First pitch of the series opener is slated for 3 p.m.