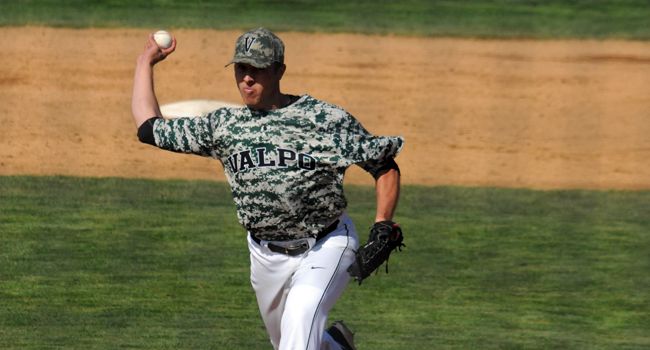 This Week in Crusader Baseball: After sweeping a three-game series from Milwaukee last weekend, Valparaiso returns to Emory G. Bauer Field this weekend to host Wright State in a three-game set.  The Raiders are the preseason favorite in the Horizon League this season and the series will be a rematch of last year’s Horizon League Tournament championship contest.

On the Air: None of the games this weekend will be broadcast online or over the airwaves.  Live stats will be available through valpoathletics.com for each game though.

Head Coach Tracy Woodson: Tracy Woodson, the 16th head coach in Valparaiso University history, is in his sixth season at the helm of the Crusaders and has a 128-171 (.428) record both for his career as well as at Valpo.  Woodson ranks fourth in school history for career wins by a head coach.  A member of the Los Angeles Dodgers 1988 World Champion team, he has also managed in the minor leagues through the AAA level.

Series Notes: Wright State leads the all-time series against the Crusaders 17-6 dating back to 1992.  The Raiders won four of five games against Valpo last season, with all five meetings taking place in Dayton, Ohio.  Wright State took two of three against Valpo during the regular season, winning the series opener 10-4 before the Crusaders took game two 6-2.  The Raiders took the regular season series finale 6-5.  The two schools met in the Horizon League Tournament as well, with Wright State winning both games by 4-3 scores, including the championship.  Valpo’s last win against the Raiders at Emory G. Bauer Field came on April 18, 2009, a 14-1 triumph.

Wrapping Up Recent Action: Valparaiso swept a three-game series against Milwaukee last weekend.  After the series opener was postponed until Saturday, Tyler Deetjen tossed a six-hit shutout as the Crusaders won game one 7-0.  Kevin Wild carried a no-hitter into the 10th inning of game two before surrendering a double for the Panthers’ lone hit as Valpo won 1-0 in 10 innings.  In Sunday’s series finale, Elliott Martin doubled home a pair of runs in the bottom of the eighth inning to give the Crusaders a 3-2 victory.

Scouting Wright State: The Raiders have won six of their last seven games following a 7-1 victory at Ohio on Tuesday.  Wright State won two of three in each of its first two Horizon League series against UIC and Butler.  Jake Hibberd leads the Raiders batting .389 on the season with three home runs and 23 runs batted in while Ryan Ashe is hitting .381.  The Raiders are batting .304 as a team and the pitching staff has posted a 5.49 earned run average on the year.

Near No-No Earns Pitcher of the Week Honors: Right-hander Kevin Wild was named the Horizon League’s Pitcher of the Week after throwing nine-plus innings of one-hit baseball against Milwaukee on Saturday.  Wild carried a no-hitter into the 10th inning of game two of the doubleheader before giving up a leadoff double.  He struck out six in the game but did not earn a decision.

Deetjen Also Recognized: Tyler Deetjen was named College Sports Madness Player of the Week for the Horizon League after throwing a complete game, six-hit shutout against Milwaukee to open Saturday’s doubleheader.  The southpaw did not walk anyone and struck out six in the victory.

Wormington Solid on the Hill as Well: Not to be out done by Saturday’s starters, Kyle Wormington had a solid start of his own on Sunday.  The junior went eight strong innings, allowing just two runs on eight hits without walking anyone and striking out six on the way to his first victory as a Crusader.

It’s Been Quite Awhile: Valparaiso posted shutout victories in both games of last Saturday’s doubleheader against Milwaukee, marking the first time the Crusaders have blanked an opponent in both games of a twinbill since April 10, 1999 when Valpo shut out Chicago State 4-0 and 9-0.  The last time the Brown and Gold had posted back-to-back shutouts was April 11 and April 13, 2009 with a 5-0 win against North Dakota and a 12-0 victory over Grace.

Vavra Bats .600 vs. Milwaukee: Tanner Vavra went 6-for-10 last weekend against Milwaukee, posting a .600 batting average.  He had two doubles, drove in a run, and added a pair of sacrifice bunts for a productive week at the plate.  He continues to lead the Horizon League and ranks sixth nationally with four triples already this season.  He also leads Valpo on the year batting .348.

Putting the Ball in Play: Andrew Bain may not be driving the ball into the power allies for extra base hits, but the Crusaders’ junior leadoff man is getting the job done.  Bain ranks second on the team in hitting with a .330 average, with all 32 of his hits being singles.

Double Trouble: John Loeffler registered his seventh double of the season in the series opener against Milwaukee.  The junior college transfer now has six doubles in his last 11 games dating back to March 7 at Wake Forest.  Loeffler is tied for second in the conference with his seven two-baggers.

Quick Games: Valpo has played seven games in under 2:15 this season and 14 of its 22 contests in under 2:30.  The only three three-hour contests were all extra inning affairs.

Lowering the ERA: Valpo’s pitching staff lowered its team earned run average by more than half of a run last weekend against Milwaukee, surrendering just two runs in 28 innings of baseball.  The staff’s 4.35 ERA is tops in the Horizon League.  Crusader pitchers are keeping runners off base via free passes as Valpo is averaging just 2.61 walks per nine innings, the 22nd best rate in the country.

Bonus Baseball: Valpo played its sixth extra inning game of the season on Saturday against Milwaukee in the 1-0 victory.  The Crusaders are 4-2 when playing 10 or more innings this year.

Closing Time: Jarad Miller has picked back up where he left off after missing the last year and a half with an injury, adding to his school record-setting career save total.  Miller recorded his second save of the season in the series finale against Milwaukee.  His 30 career saves are 16 more than any other player in program history after setting the school’s single season record with 17 during his All-American season in 2009.

This and That: The opening game of the series against Wright State will mark head coach Tracy Woodson’s 300th as Crusader head coach ... Tanner Vavra enters the weekend with an eight-game hitting streak, the longest active among Crusaders ... Andrew Bain has tallied multi-hit efforts in 12 of the 22 games thus far this season ... Jarad Miller is tied for the Horizon League lead with three victories ... Tyler Deetjen, who has walked just four batters in 44.2 innings of work, ranks 18th in all of Division I allowing just 0.81 base on balls per nine innings.