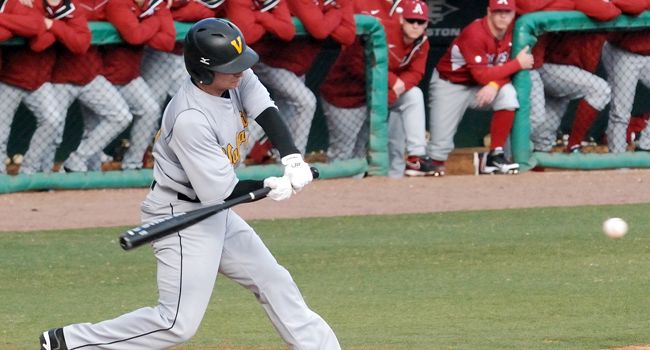 Valparaiso battled back from a five-run deficit to force extra innings on Friday afternoon, but Wright State plated the winning run in the top of the 10th inning to defeat the Crusaders 7-6 at Emory G. Bauer Field.

Andrew Bain (Indianapolis, Ind./Park Tudor H.S.) went 4-for-5 in the game for the Crusaders and scored twice while Elliott Martin (Irvine, Calif./University H.S.) added a two-hit effort in the loss.

“Bain has done a great job for us since we moved him into the lead-off spot,” head coach Tracy Woodson said.  “He takes a lot of pitches and puts the ball in play.  He just finds holes.”

Wright State built a 5-0 lead in the first two innings.  Ryan Ashe delivered a RBI single in the opening inning before the Raiders plated four runs in the second.  Jake Hibberd delivered a two-run single and Corey Davis followed with a two-run home run to right field.

Valpo starter Tyler Deetjen (Saint Charles, Ill./East H.S.) settled down after the long ball, retiring 13 of the next 14 hitters he faced to get the Crusaders through the sixth inning with just the five runs on the board.  He finished the game working eight innings, allowing six runs on eight hits and struck out six while not walking anyone.

“Deetjen showed a lot of fight after those opening couple of innings,” Woodson added.  “He saved our bullpen for the rest of the weekend getting through eight innings today.”

The Brown and Gold finally broke through on the scoreboard in the fourth as Martin delivered a RBI single to score Chris Manning (Lake Forest, Calif./El Toro H.S.) with two outs.  Will Hagel (Arlington Heights, Ill./Prospect H.S.) singled home Bain to pull the Crusaders within 5-2 in the fifth.

A two-out double by Davis in the seventh scored Michael Timm to increase the Raider lead to four runs before Valpo tied the game in the bottom half of the inning.

Billy Cribbs (Rochester, Mich./Rochester H.S.) walked to lead off the seventh inning and Grant Yoder (Fort Wayne, Ind./Snider H.S.) followed with a single to chase Wright State starter Lee Valencheck.  Bain registered his fourth hit of the day, an infield hit up the middle to load the bases and Tanner Vavra (Menomonie, Wis./Menomonie H.S.) followed with a hit back up the box to score two runs.  After a double steal by Bain and Vavra, RBI ground outs by Hagel and Manning tied the game at six.

“I liked the way we battled back after falling behind early,” Woodson said.  “We made a couple of base-running mistakes early and that didn’t help our cause.”

Neither team would score until the 10th when Wright State collected four straight hits with two outs.  Justin Kopale drove home what would be the winning run with an infield single deep into the hole at short, plating Tristan Moore.  All seven of Wright State’s runs on the afternoon came with two outs.