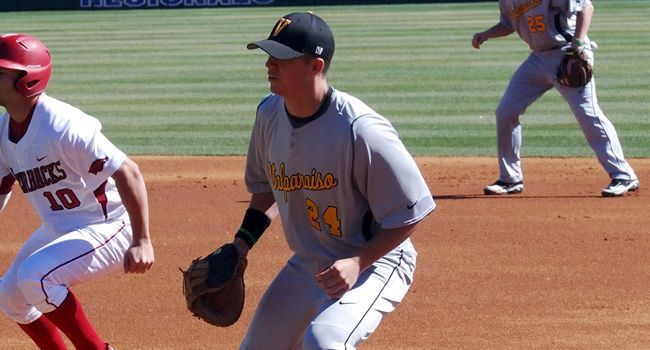 Will Hagel (Arlington Heights, Ill./Prospect H.S.) singled home the tying run in the top of the ninth inning for Valparaiso, but Western Michigan plated in the winning run in the bottom of the innings as the Broncos topped the Crusaders 5-4 on Tuesday afternoon at Robert J. Bobb Stadium in Kalamazoo, Mich.

Valpo trailed 4-3 heading to the ninth when Chris Manning (Lake Forest, Calif./El Toro H.S.) drew a one-out walk and moved to second on a ground out.  Hagel delivered the tying run when he lined a single to left-center, scoring Manning.

“Hagel got a pitch up in the zone that he could hit and did something with it,” head coach Tracy Woodson said.  “We swung the bats okay in general, but need to be more patient and let the ball come to us.”

The Broncos scored the winning run in the bottom of the inning.  Patrick Duncan, who went 4-for-4 on the afternoon, singled to lead off the inning and moved to second on a sacrifice bunt.  Caleb Caton drove home the game-winner with a hit to the gap in right-center, giving Western Michigan its seventh straight victory.

Western Michigan (14-10) scored three times in the bottom of the second.  Ryan McMillin homered to open the inning and the Broncos took the lead on a fielder’s choice ground out.  A wild pitch extended the lead to 3-1 before Valpo added a run in the third.

Hagel singled with one out and scored on a Billy Cribbs (Rochester, Mich./Rochester H.S.) hit to left, Valpo’s fourth straight in the inning.  The Crusaders would again strand the bases loaded and trailed 3-2.

Grant Yoder (Fort Wayne, Ind./Snider H.S.) led off the sixth inning with a double and was pinch run for by Mark Johnson (Evanston, Ill./Evanston Township H.S.).  After a sacrifice bunt, Steven Scoby (Delton, Mich./Delton Kellogg H.S.) drove home Johnson with a sacrifice fly to tie the game at three.

The Broncos took the lead in the seventh on a two-out throwing error, setting the table for the Crusader rally in the ninth.

Will Robinson (Placentia, Calif./Valencia H.S.) started for Valpo, working 6.2 innings.  He allowed four runs, three of which were earned, on seven hits.  Kevin Upp (LaPorte, Ind./LaPorte H.S.) suffered the loss (0-1), pitching the final 1.2 innings and giving up the run in the ninth.

“Our pitching was good enough to win again today,” Woodson added.  “Will did well and Kevin was fine.  He just left one pitch up that they hit.  When we throw strikes we are effective.”

Patrick Borlik, who blew the save in the top of the ninth, was credited with the win (5-2) for the Broncos.

Hagel and Loeffler each had two hits for Valpo as part of a nine-hit effort by the Crusaders.

“We have to forget about today and get ready to go on Thursday,” Woodson concluded.

Valparaiso (8-18) will return to action on Thursday evening to begin a three-game Horizon League series against UIC.  First pitch is slated for 6:05 p.m. from Les Miller Field in Chicago, Ill.