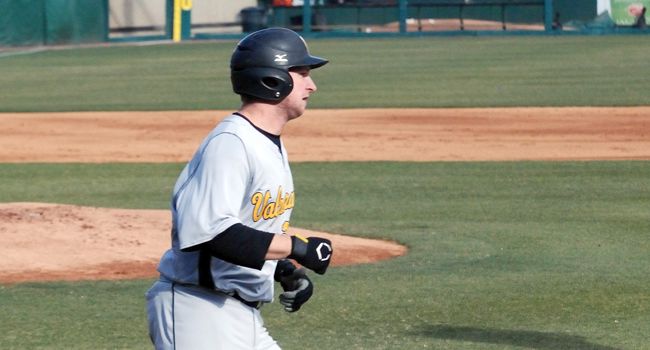 Valpo entered the game having hit just seven homers in the 31 previous games, but needed both long balls on Friday to earn the victory.

“I was excited that we swung the bats better today,” head coach Tracy Woodson said after the game.  “We got the two big three-run homers which proved to key.”

The Crusaders wasted little time taking the lead, plating four runs in the opening inning.  Andrew Bain (Indianapolis, Ind./Park Tudor H.S.) was hit by a pitch to lead off the game and Tanner Vavra (Menomonie, Wis./Menomonie H.S.) reached on an error on a sacrifice bunt.  After a fielder’s choice, Elliott Martin (Irvine, Calif./University H.S.) singled home Bain with the game’s first run.  Loeffler followed with his three-run shot which cleared the bullpen beyond the right field wall, his second round-tripper of the year.

“Jumping out to the 4-0 lead was huge because it helped to set the tone for the game,” Woodson added.  “We gave them up a couple of runs back and it showed down the stretch that we needed those early runs.”

Youngstown State answered with a run in the fourth on a single by Craig Goubeaux with two outs, which scored Drew Dosch.

Chris Manning (Lake Forest, Calif./El Toro H.S.) started the Crusader offense again in the sixth with a one-out single.  Spencer Mahoney (LaGrange Park, Ill./Lyons Township H.S.), returning to the lineup after missing 27 games with an injury, followed with another hit before Cribbs launched his first home run of the season into the left field bullpen.

The Penguins scored two more runs in the bottom of the sixth, one on a single by Jason Shirley and another on a Crusader error which led to an unearned run.  A sacrifice fly in the seventh by Dosch plated Youngstown State’s final run.

Tyler Deetjen (Saint Charles, Ill./East H.S.) worked 7.2 innings for the win (2-2), allowing four runs, three earned, on 10 hits.  He did not walk anyone and struck out three.  Jarad Miller (Fort Wayne, Ind./Carroll H.S.) earned his third save of the season, pitching the final inning and a third.

The Penguins did load the bases in the ninth before Goubeaux flew out to left to end the game.

Manning, Cribbs, and Steven Scoby (Delton, Mich./Delton Kellogg H.S.) each had two hits for the Crusaders, as the Brown and Gold tallied 10 hits on the afternoon.  Four different Penguins had two hits each as part of Youngstown State’s 12-hit attack.

Russ Harless suffered the loss (0-3) for the Penguins, working 7.2 innings.  He gave up seven runs, six of which were earned, on 10 hits.

Valparaiso (13-19, 7-6 Horizon) and Youngstown State (4-28, 2-11) will play game two of the weekend series on Saturday afternoon.   First pitch has been moved up to 11 a.m. CDT due to forecasted rain in the Northeast Ohio area.