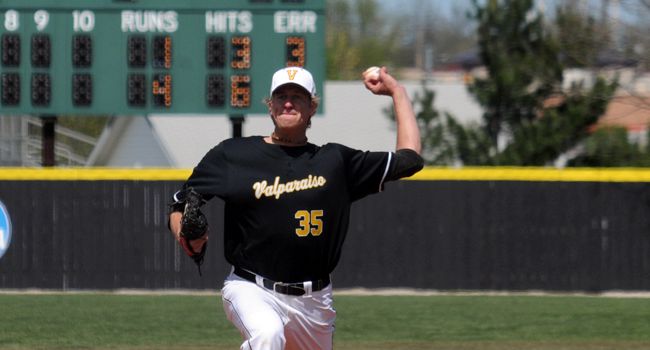 Four first inning runs were all that Tyler Deetjen (Saint Charles, Ill./East H.S.) needed on Saturday afternoon to lead Valparaiso to a 4-2 victory over Butler in the opening game of a three-game series at Emory G. Bauer Field.

Deetjen went the distance for his third complete game of the season, allowing just one earned run and four hits. He walked just one and struck out seven to earn his third win (3-2) of the season.

“Deetjen was really good yet again today,” head coach Tracy Woodson said after the game.  “He was upset about giving up the walk in the second that led to the run, but that was about the only mistake he made on the day.”

Valpo did all of its offensive damage in the opening inning.  Chris Manning (Lake Forest, Calif./El Toro H.S.) singled and stole second and Tanner Vavra (Menomonie, Wis./Menomonie H.S.) was hit by a pitch.  Will Hagel (Arlington Heights, Ill./Prospect H.S.) loaded the bases when he reached on a fielder’s choice when Butler pitcher Dom Silvestri’s throw to second was late.  Elliott Martin (Irvine, Calif./University H.S.) plated the first run when he was hit by a pitch.  John Loeffler (Burnsville, Minn./Burnsville H.S.) delivered a key two-out single up the middle that scored three runs, the last of which came home when the centerfielder bobbled the ball.

“We got all those runners on and still needed a big hit which Johnny gave us,” Woodson added.  We still left too many runners on base after that inning, but four runs is a lot on a day like today with the wind blowing in and Deetjen throwing well.”

That would be all of Valpo’s offense against Silvestri, who was tagged with the loss (3-2), despite working seven innings.  He allowed just six hits on the afternoon and struck out four while walking two.

Butler got one run back in the second on a Bob Akin single which scored Radley Haddad.  The Bulldogs scored their other run in the ninth on a bases loaded sacrifice fly by Jack Dillon.

“Deetjen recovered well after the error in the ninth which could have turned into a double play.  We had the bullpen ready, but felt he could get through the lineup with his pitches.”

Andrew Bain (Indianapolis, Ind./Park Tudor H.S.) and Billy Cribbs (Rochester, Mich./Rochester H.S.) each had two hits for the Crusaders on the afternoon as part of a seven-hit attack.