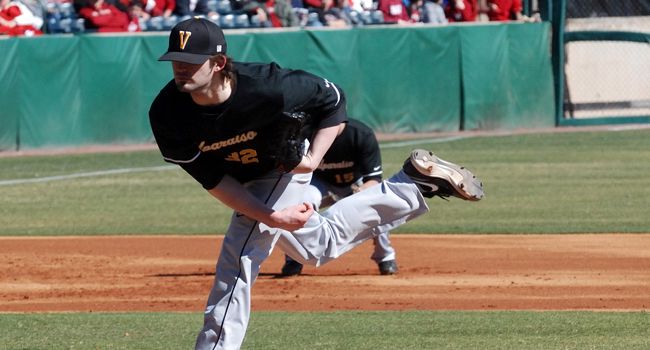 The Crusaders also swept the season series against the Panthers, winning all six games.  Valpo has now won seven straight games and 14 of the last 16 overall.  The Brown and Gold has also won nine straight Horizon League contests to pull within one game of first place Wright State in the conference standings.  Valpo is five games in front of Milwaukee for third place as the top two teams in the league earn a first round bye in the conference tournament at the end of May.

“We have to just keep playing like we have been,” head coach Tracy Woodson said after the game.  “We’ve put ourselves in a position to contend for the conference title.  Next weekend (at Wright State) will be the biggest series for Valpo baseball since we joined the Horizon League.”

Wild, pitching just 10 minutes from his hometown, allowed one unearned run in the second inning and scattered six hits for his fifth win (5-1) of the season.  He walked just two and struck out five while lowering his season ERA to 2.28.

“Wild’s stuff was good again today,” Woodson added.  “You have to give him credit for another outstanding performance, especially pitching in front of all of his friends and family today.  It was going to be tough for me to take him out, even with the runners on base in the ninth.”

Valpo gave him runs to work with before he even took the mound in the opening inning.  Andrew Bain (Indianapolis, Ind./Park Tudor H.S.) reached on an error to lead off the game and Tanner Vavra (Menomonie, Wis./Menomonie H.S.) followed with a walk.  After Chris Manning (Lake Forest, Calif./El Toro H.S.) was hit by a pitch to load the bases, Will Hagel (Arlington Heights, Ill./Prospect H.S.) singled home a pair of runs to give the Crusaders a 2-0 advantage.

The Panthers plated their only run in the second as Will Fadness reached on an error and scored on a one-out double by Phil Striggow.

Spencer Mahoney (LaGrange Park, Ill./Lyons Township H.S.) led off the fourth with a walk and was sacrificed to second.  Steven Scoby (Delton, Mich./Delton Kellogg H.S.) lined a single into center to make it 3-1 Valpo.

The Crusaders added one final insurance run in the eighth as Hagel led off with a single and moved around to third before scoring on two-out wild pitch.

“Offensively we got our bunts down and scored two runs with two outs in the opener,” Woodson said.

Wild never allowed more than one hit in an inning, and never saw the Panthers put more than one runner on base at the same time until the ninth when a walk and an error put runners on the corners with one out.  The senior right-hander induced a pop up before striking out Tell Taylor looking to end the game.

Valpo managed just five hits off of Cale Tassi, who took the loss (3-5) for Milwaukee, but manufactured just enough offense.  Tassi allowed all four runs, three of which were earned, in eight innings of work while walking three and striking out five.

Hagel was the only player in the game with more than one hit.

More solid pitching followed in game two as Wormington allowed just one run and eight hits in 7.1 innings of work to earn the victory (3-5).  He allowed eight hits but walked just one and struck out two.

The Crusaders, for the third time in the series, scored in the opening inning.  Bain was hit by a pitch to lead off and Vavra moved him to second with a sacrifice bunt.  With two outs, Elliott Martin (Irvine, Calif./Saddleback H.S.) singled into center to plate Bain and give the Brown and Gold a 1-0 lead.

Milwaukee (17-23, 10-11 Horizon) answered in the bottom of the first when Luke Meeteer walked and moved to third on a single by Jim Lundstrom.  Sam Koenig followed with a hot shot to third that was misplayed for an error, scoring Meeteer.  Valpo avoided further damage in the inning though as Wormington got a double play to end the frame.

The top of the Crusader lineup also produced run number two, which proved to be the winning tally in the third inning.  Bain singled and moved to second on Vavra’s bunt.  Manning added an infield single to shortstop before Hagel plated the go ahead run with a sacrifice fly to center.

Valpo would manage just four hits the rest of the way but won the game with pitching and defense.  The Panthers left nine runners in the game, seven of which were in scoring position.

Milwaukee put runners on second and third with two outs in the fourth before Wormington registered one of his two strikeouts to end the inning.  One inning later, Micahel Porcaro led off with a double and moved to third on a bunt.  Lundstrom popped up a squeeze bunt attempt that Wormington grabbed and doubled off Porcaro to end the threat.

A leadoff double in the sixth followed by a bunt gave the Panthers another runner at third with less than two outs before back-to-back ground ball outs ended the threat without damage.

The home team looked poised to tie and take the lead in the eighth as Meeteer led off with a single and moved to third on Sam Koenig’s one out double.  Miller came out of the bullpen for the Crusaders though, and got a ground out and a flyout to end the threat, again without a run crossing the plate.

“We can’t get out of those situations with runners on third and less than two outs all of the time,” Woodson stated.  “Bain saved a run with his diving stop, one of several great defensive plays we made today.”

Miller loaded the bases full of Panthers again in the ninth on two walks and a bunt single, but induced a game-ending double play off of the bat of Meeteer, the third twin-killing of the game by the Crusaders, to earn his fifth save of the year and give Valpo the victory.

Mike Schneider suffered the loss (2-5) for Milwaukee, despite allowing just two runs in five innings of action.  He allowed six hits and three walks while striking out two.

Martin went 3-for-4 in game two for the Crusaders while Bain also had two hits as part of Valpo’s eight-hit attack.

Valparaiso (22-20, 15-6), which was 10 games under the .500 mark on April 5, is now two games over the .500 mark for the first time since the end of the 2009 campaign.  The Crusaders will play game five of its current eight-game road trip on Wednesday evening against Notre Dame.  First pitch is slated for 4:30 p.m. at Frank Eck Stadium in South Bend, Ind.