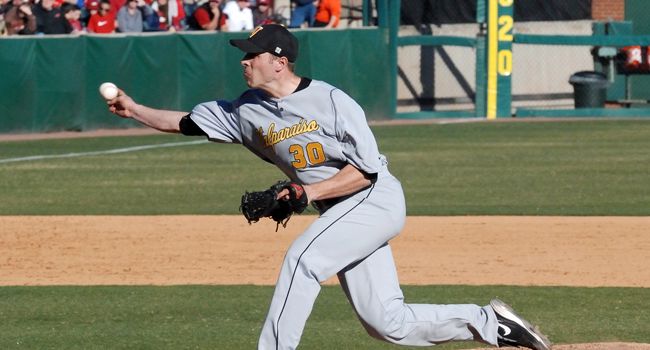 Jarad Miller notched save #35 of his career on Sunday. (Rick Cochran)
Valparaiso at Wright State | May 06, 2012
Related Links
Related Links

Valparaiso scored single runs in each of the first four innings on Sunday afternoon and defeated Wright State 4-3 at Nischwitz Stadium in Dayton, Ohio to pull into a tie for first place in the Horizon League with the Raiders.

“I’m excited with the way we played the whole weekend,” head coach Tracy Woodson said after the game.

The Crusaders, which went 7-1 on the road trip, now return home for the final nine games of the regular season, including the final six conference contests.  Valpo has won 19 of its last 22 games over the last month.

After splitting the first two games of the weekend series, both one run contests as well, Valpo jumped on top with single runs in each of the first four innings.  Andrew Bain (Indianapolis, Ind./Park Tudor H.S.) led off the game with a walk and scored on a two-out double by Elliott Martin (Irvine, Calif./University H.S.).

Billy Cribbs (Rochester, Mich./Rochester H.S.) launched a one-out home run in the second for his second round-tripper of the inning to put the Crusaders up 2-0.  In the third, Chris Manning (Lake Forest, Calif./El Toro H.S.) led off with a walk and again Valpo took advantage, as Will Hagel (Arlington Heights, Ill./Prospect H.S.) drove him home with a double.

Steven Scoby (Delton, Mich./Delton H.S.) led off the Crusader fourth with a double, moved to third on a bunt, and scored on Manning’s sacrifice fly to put Valpo on top 4-0.

“We took advantage of their walks and hit batters,” Woodson added.  “We still had chances to extend the lead even more and didn’t do it, leaving too many runners on.”

Valpo would not get another hit until the ninth, but starter Kyle Wormington (Norman, Okla./North H.S.) cruised through the first six innings on the hill.  He allowed one unearned run in the fifth on a sacrifice fly following a hit batter and an error, but that was it until the seventh.

“I think this was Worm’s best outing of the year,” Woodson said.  “He had three pitches working and for the most part put them where he wanted to.”

Wright State tried to rally in the seventh, as Ryan Ashe led off with a single and moved to third as Garrett Gray followed with a double.  Justin Kopale singled home Ashe to make it 4-2 and Wormington left with runners on the corners.  Sean Kennedy (Gurnee, Ill./Warren Township H.S.) came on and struck out the first hitter he faced before getting Michael Timm to hit a sacrifice fly, making it a one-run game.  A foul out ended the inning with Valpo still on top 4-3 heading to the ninth.

Jarad Miller (Fort Wayne, Ind./Carroll H.S.) came on to pitch a one-two-three ninth, striking out Tristan Moore to end the game and register his seventh save of the season.  It also marked the 35th career save for the Crusader closer.

“This was the best Miller has thrown in a long time,” commented Woodson.  “It’s been big for us that Sean Kennedy has been able to come in for us as another quality arm out of the pen helping to set up our back end.”

Gray and Corey Davis each went 3-for-4 for the Raiders as the hosts had nine hits on the afternoon.  Valpo managed just five, with Scoby going 2-for-4, but the Crusaders took advantage of seven Wright State walks.

“We need to keep playing good baseball,” Woodson concluded.  “I think we have lots of things we can do this year to make it a special season and not just a good one.”

Valparaiso (25-21, 17-7) will return to Emory G. Bauer Field on Tuesday afternoon, stepping out of conference action to face North Central.  First pitch is set for 3 p.m.