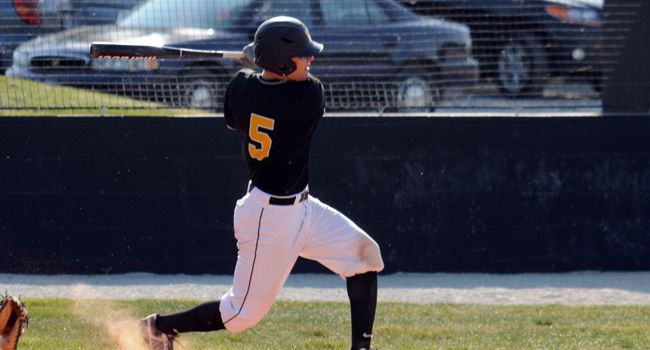 Tanner Vavra’s (Menomonie, Wis./Menomonie H.S.) hard smash to short with two outs in the 11th inning scored Spencer Mahoney (LaGrange Park, Ill./Lyons Township H.S.) with the winning run to give Valparaiso an 8-7 victory over Youngstown State on Friday afternoon at Emory G. Bauer Field.  With the victory, the Crusaders have clinched at least a share of their first Horizon League regular season title, and first overall conference title since 1977.

Valpo won an Indiana Collegiate Conference tournament title in 1982 and AMCU-8 Blue Division championships in 1987 and 1988, but last won a conference regular season championship in the ICC in 1977.

“It may not have been pretty, but a championship is a championship,” head coach Tracy Woodson said after the game.  “For what we’ve been able to accomplish as a program here, this is a great thing.  I’m really excited about it.  Now we want to come out tomorrow and play for an outright title as well as the number one seed in the conference tournament.”

The Crusaders scored five times in the first inning and eventually built a 6-0 lead before the Penguins came back to tie the contest with a pair of runs in the ninth inning.  Valpo had the leadoff runner aboard in each of the final seven innings, but left 16 runners on base in the game.

“It was not a good day for us offensively other than the first inning,” Woodson added.  “We let them get back in the game and did not execute a few times when we had the leadoff runner aboard.  We had chances to extend the lead and didn’t do it.  We were lucky to win the game today.”

With the game tied at seven in the 11th, Mahoney reached on a bunt single and moved to third on Andrew Bain’s (Indianapolis, Ind./Park Tudor H.S.) two-out single to right.  Vavra then hit a hard smash that the Penguin shortstop Phil Lipari could not handle, allowing Mahoney to score the winning run.

The Crusaders jumped on top quickly on Friday, with the first six hitters all notching singles.  Bain led off with a hit and Vavra followed with a bunt hit.  The duo executed a double steal putting both runners in scoring position before Chris Manning (Lake Forest, Calif./El Toro H.S.) delivered a two-run single for the game’s first runs.  Will Hagel (Arlington Heights, Ill./Prospect H.S.) followed with a hit to right putting runners on the corners before Elliott Martin’s (Irvine, Calif./University H.S.) bunt single squeezed home Manning.

John Loeffler (Burnsville, Minn./Burnsville H.S.) registered the sixth straight hit to load the bases with a single that dropped in left-center before Mahoney plated Hagel with a sacrifice fly.  Steven Scoby (Delton, Mich./Delton Kellogg H.S.) put Valpo on top 5-0 with a single to center, as the Crusaders sent 10 men to the plate in the opening inning.

“In the first inning we executed,” Woodson stated.  “We bunted, hit, ran the bases, a little of everything.  Unfortunately we have the tendency to relax, and we can’t do that, especially with the wind blowing out.”

Valpo added to the lead in the second with a RBI single by Loeffler that scored Manning before the Penguins began their comeback.

Jeremy Banks delivered a two-run single in the sixth to put Youngstown State on the scoreboard.

The Crusaders answered with a run in the bottom of the sixth and Manning doubled down the leftfield line, scoring Vavra, who led off the inning with one of his four hits on the afternoon.

Youngstown State scored three runs in the seventh before adding two more in the ninth, as Drew Dosch tied the game with a RBI single, scoring an unearned run.

Valpo finished with 20 hits on the afternoon, including the four hit days by Vavra and Mahoney.  Manning and Hagel each added three hits, with Manning also driving home three runs.

Dosch went 4-for-5 for the Penguins as part of Youngstown State’s 13-hit attack on the day.

Sean Kennedy (Gurnee, Ill./Warren Township H.S.) earned the win (2-0) pitching a scoreless top of the 11th for the Crusaders, striking out a pair while allowing just one hit.  Nic Manuppelli suffered the loss (1-4) for the Penguins, allowing just the one unearned run on four hits in three innings of work.

“Sean Kennedy and (Ben) Mahar were really good for us in relief today,” Woodson stated.

Valparaiso (31-22, 21-8 Horizon) and Youngstown State (9-41, 7-22) will close out the 2012 regular season on Saturday at Emory G. Bauer Field.  First pitch is set for 1 p.m. with Senior Day activities beginning approximately 12:40 p.m.  The Crusaders enter the final day of the regular season with a one game lead over Wright State in the Horizon League standings after the Raiders fell at Milwaukee for the second straight day, 9-3, on Friday.