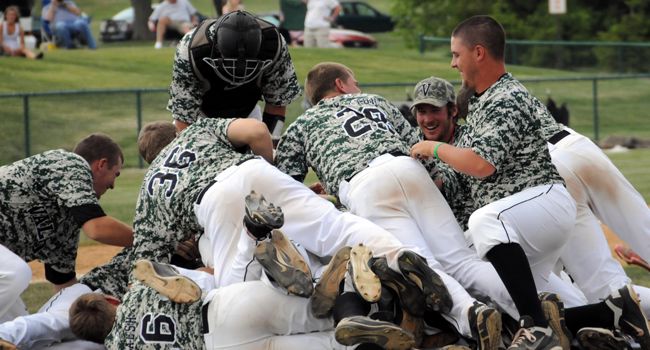 By the time fifth-year senior closer Jarad Miller (Fort Wayne, Ind./Carroll H.S.) pinch hit for the first time in his career on Saturday afternoon, Valparaiso could already taste an outright Horizon League Championship.  His double to the right-centerfield gap drove home the Crusaders’ 12th run of the game as the Brown and Gold defeated Youngstown State 13-2 at Emory G. Bauer Field to clinch the conference crown.

On Senior Day, it was the outgoing class that provided a great deal of the offense, as Will Hagel (Arlington Heights, Ill./Prospect H.S.) hit a two-run home run to cap a seven-run fifth inning, and classmate Steven Scoby (Delton, Mich./Delton H.S.) drove home two more in the sixth with a double down the leftfield line.

“This feels absolutely great,” head coach Tracy Woodson said following the game.  “For six years we’ve been building this program towards where we want it to be.  We took a big stride last year getting to the tournament championship game, but it all culminated today.  Now next week (the Horizon League Tournament) will be the next big weekend.  This is just great for the seniors.  Some of them have been around for five years, and they have really bought into this program.”

Valpo finishes the regular season winning 24 of its final 28 games, moving from 10 games below the .500 mark on April 3 to finish 10 games over at 32-22.  The Crusaders went 22-8 in the Horizon League, winning the conference title by two games over Wright State, as the Raiders fell for the third straight day at Milwaukee.

“I wanted us to win today so people couldn’t say we backed in,” Woodson stated.  “We earned this and did it on the field ourselves.  We didn’t want to share a title.  We wanted it to be ours outright.”

The Crusaders needed to come from behind to capture the title though, as the Penguins scored the game’s first two runs.  Drew Dosch hit a solo home run to right in the opening inning, while Phil Lipari doubled home David Saluga in the third.

Meanwhile, Youngstown State starter Patrick O’Brien sent the first 11 Crusaders down in order, and carried a no-hitter into the fifth inning.

Valpo’s bats came alive though, and the Crusaders took advantage of a costly Penguin error, sending 10 hitters to the plate while scoring seven times in that fifth inning.  John Loeffler (Burnsville, Minn./Burnsville H.S.) led off the inning with a single, extending his streak of games having reached base safely to 29 straight.  After he was bunted over to second, Spencer Mahoney (LaGrange Park, Ill./Lyons Township H.S.) drove him home with Valpo’s first run, doubling to left.

Billy Cribbs (Rochester, Mich./Rochester H.S.) tied the game with a single to left, and was replaced on the base paths one batter later by Scoby, who grounded into a fielder’s choice.  Andrew Bain (Indianapolis, Ind./Park Tudor H.s.) hit a grounder to short that should have ended the inning, but a throwing error allowed Scoby to score and Bain to reach.  Tanner Vavra (Menomonie, Wis./Menomonie H.S.) singled to put two runners aboard before Chris Manning (Lake Forest, Calif./El Toro H.S.) singled home Bain, making it  4-2 Crusaders.  A wild pitch plated Vavra with the fifth run before Hagel hit his second round-tripper of the season to right, capping the seven-run outburst while extending his hitting streak to 12 straight games.

“I like winning streaks more than individual streaks, but you have to have those too to be successful,” Woodson added.  “Everyone feeds off of one another when we start hitting and putting together the big innings.  We hit the ball hard and when they made their mistake we capitalized.  We scored lots of runs with two outs.”

Valpo continued to add on runs, scoring a pair in each of the next three innings.  Scoby delivered his two-run double in the sixth while Elliott Martin (Irvine, Calif./University H.S.) added a two-run single in the seventh.

In the eighth, Vavra reached on an error with one out and moved to second on a single by Mark Johnson (Evanston, Ill./Evanston Township H.S.).  That’s when Miller, Valpo’s career saves record-holder with 35, grabbed a bat and delivered a double to the gap in right-center, scoring Vavra.  Johnson scored one batter later on a wild pitch to close out the scoring.

Kyle Wormington (Norman, Okla./North H.S.) took care of the Youngstown State (9-42, 7-23 Horizon) offense with his work on the mound, after allowing the second run in the third, giving up just two hits the rest of the way.  The junior right-hander set down the final eight hitters he faced, and 12 of the final 13 he faced overall.  He picked up the victory (6-5), allowing just the two runs and six hits over seven innings without walking a batter.  He struck out four before giving way to Will Robinson (Placentia, Calif./Valencia H.S.) for the final six outs.

“Kyle probably could have finished it out, but we wanted to get Will some work today,” Woodson concluded.  “Our starting pitching has been there for us all year, and has been a big key to our success.”

When Robinson caught Ryan Trimber looking at a third strike for the game’s final out the Crusaders poured onto the field in celebration.

Valpo finished the day with 14 hits, including three by Mahoney, who raised his average to a team-leading .344.  Loeffler and Martin each had two hits while Hagel, Scoby, and Martin drove home a pair of runs each.

Marcus Heath had two of Youngstown State’s seven hits on the afternoon.  O’Brien suffered the loss (1-6), allowing seven runs, only two of which were earned, on six hits in five innings of work.

Valparaiso will head to the Horizon League Tournament as the number one seed, and has earned an opening round bye.  The Crusaders will open tournament action on Thursday evening at Les Miller Field on the campus of UIC in Chicago with an 8 p.m. contest.