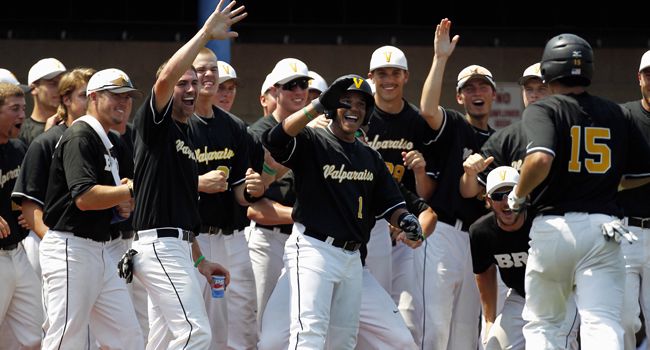 This Week in Crusader Baseball: Valparaiso makes its first appearance in the NCAA Division I regionals since 1968 this weekend as the Crusaders head 27 miles down the road to U.S. Steel Yard in Gary for the double elimination tournament.  The Crusaders will face #15 Purdue on Friday night at 7 p.m. before facing either #11 Kentucky or Kent State on Saturday.

On the Air: Friday’s game against Purdue, and any other tournament contests against the Boilermakers, will be broadcast live on the Big Ten Network. All of Valpo’s tournament games will be carried on the radio on WVUR (95.1-FM, Valparaiso) and online at valpoathletics.com.   Live stats will be available through valpoathletics.com for each game of the tournament as well.  Per NCAA rules, there will be no live interactive blog at the regionals.

Head Coach Tracy Woodson: Tracy Woodson, the 16th head coach in Valparaiso University history, is in his sixth season at the helm of the Crusaders and has a 155-180 (.463) record both for his career as well as at Valpo.  Woodson ranks third in school history for career wins by a head coach.  A member of the Los Angeles Dodgers 1988 World Champion team, he has also managed in the minor leagues through the AAA level.

Probable Starters: Tyler Deetjen (LHP, 8-2, 3.22) will be handed the baseball on Friday night in Valpo’s tournament opener against Purdue.  The Boilermakers will counter with Joe Haase (RHP, 10-1, 3.41).  The rest of Valpo’s tournament rotation will be determined on a game-by-game basis.

Series Notes: Valpo and Purdue will be meeting for the 82nd time in a series that dates back to 1949 on Friday evening.  The Boilermakers hold a 63-18 all-time advantage in the series and have won four straight games between the two schools, the most recent a 14-5 win in West Lafayette, Ind. on April 6, 2010.  Valpo’s last victory over Purdue came at U.S. Steel Yard in Gary on May 11, 2005, a 5-3 triumph over the Boilermakers.  Valpo has never faced Kentucky or Kent State on the diamond.

Wrapping Up Recent Action: Valpo captured the Horizon League tournament title last weekend with a 14-5 victory at UIC on Sunday.  The Crusaders defeated Youngstown State 16-3 in the tournament opener on Thursday before beating UIC 4-3 on Friday night.  The Flames downed the Crusaders by the same 4-3 score on Saturday, setting up Sunday’s decisive title contest.

Scouting Purdue: The Boilermakers enter the tournament as the Big Ten’s regular season and tournament champions.  Kevin Plawecki leads the offense hitting .365 with seven home runs and 45 runs batted in.  As a team Purdue is hitting .318 on the season.  The pitching staff has posted a 3.10 ERA and opponents are batting just .250 against them.

Scouting Kentucky: The Wildcats opened the season with 22 straight victories.  Austin Cousino is batting .318 with nine homers and 38 RBIs while Luke Maile has 12 long balls and 49 runs batted in.  As a team Kentucky is hitting .297 while the pitching staff has a 3.48 ERA and opponents are hitting .263 against them.

Scouting Kent State: The Golden Flashes have won 17 straight games entering the tournament after capturing the Mid-American Conference’s regular season and tournament titles.  Nick Hamilton leads the offense with a .377 batting average while George Roberts is hitting .368 with seven home runs and 57 RBIs.  Kent State is batting .308 as a team while the pitching staff has a 3.55 ERA and opponents are batting .249 against them.

Tournament History: Valpo is 2-10 all-time in the NCAA Division I (formerly University Division) Regionals.  The Crusaders are making their first appearance in the NCAA Tournament since 1968.  Valpo’s last win in a regional contest was back on June 2, 1966, a 4-3 triumph over Southern Illinois.

Wormington Top Newcomer: Kyle Wormington was named co-Newcomer of the Year in the Horizon League after posting a 6-6 record with a 3.28 ERA.  All six victories came in conference play.  The junior right-handed pitcher struck out 58 and walked just 19 on the year.

Woodson Named League’s Top Coach: Tracy Woodson garnered Horizon League Coach of the Year accolades after guiding Valpo to a 35-23 record overall and a 22-8 mark in league play.  Valpo won its first Horizon League title ever, and its first league regular season crown since 1977.  The Brown and Gold enter the NCAA Tournament winners of 27 of their last 32 games overall.

It’s Been Awhile: Valpo had not won a regular season conference title since 1977 in the Indiana Collegiate Conference prior to winning the crown this year.  The Crusaders did win the AMCU-8 Blue Division championship in 1987 and 1988.  The Crusaders shared the ICC tournament title with Indiana Central in 1982, it’s last postseason tournament title prior to this season.

Ending a Long Drought: The Crusaders earned the Horizon League’s automatic bid to the NCAA Division I Baseball Championships.  Valpo had not been to an NCAA Tournament in baseball since 1976 when it appeared in the college division (Division II) tournament.  The Crusaders made appearances in the college division tournament in 1969, 1972, 1974, and 1976.  Valpo has not been in the NCAA Tournament  in Division I (then known as the university division) since 1968.  The Crusaders also had university division tournament appearances in 1958, 1963, 1966, and 1967.

Johnson Named Tournament MVP: Mark Johnson was named the Horizon League Tournament’s Most Valuable Player after batting .400 with six runs batted in over the four games.  He did not even start the tournament opener, coming on in the fourth inning after an injury to Will Hagel.  Johnson drew a 10-pitch walk in his first at bat against Youngstown State to spearhead an eight-run inning, and had the game-winning single on Friday against UIC.  Johnson went 3-for-5 in the title game with four RBIs, including the go-ahead single in the fifth inning.

Playing Solid Baseball: Valpo enters the NCAA Tournament as one of the hottest teams in the country.  The Crusaders have won 27 of their last 32 games overall, including 16 of their last 18 conference contests.  The Crusaders had fallen 10 games under the .500 mark on April 3 after a loss at Western Michigan, but battled back to move 12 games over the .500 mark entering the tournament at 35-23.  Prior to this season, the last time Valpo was 10 games over .500 was when the Crusaders finished 35-21-1 in 1985.

More on the Streak: During Valpo’s 27-5 stretch, the Crusaders have batted .312 as a team, averaging 6.7 runs per contest offensively.  Six different individuals are hitting over .300 during the stretch.  The pitching staff has posted a 2.66 earned run average during the span, limiting opponents to just a .255 batting average over the last 32 games.  Every hurler with more than two appearances has an ERA of 3.77 or below during the stretch.

Martin Feasts on League Pitching: Elliott Martin batted .385 with 38 runs batted in over 30 conference games this season.  The Crusader third baseman posted a .444 on base percentage and scored 20 times against Horizon League foes.

Bullpen Protects Crusader Leads: Valpo is a perfect 28-0 this season when taking a lead into the ninth inning in 2012.  In fact, when the Crusaders have a lead after six frames, the Brown and Gold are nearly as good with a 26-1 record on the year.

Feeling at Home: U.S. Steel Yard is just 27 miles from Valparaiso’s Emory G. Bauer Field, and the Crusaders have played there nine times over the years.  Valpo is 3-5 in collegiate games at U.S. Steel Yard, having hosted the 2010 Horizon League Tournament at the facility, and also played an exhibition contest against the Gary SouthShore RailCats in 2010.

Quite a Pitching Staff: All three of Valpo’s weekend starters garnered Horizon League honors for their efforts this season.  Each weekend pitcher has an ERA under 3.30 this season led by Kevin Wild’s 2.91 mark.  Tyler Deetjen enters the tournament at 3.22 while Kyle Wormington has a 3.28 ERA.  As a pitching staff, Valpo leads the conference with a 3.41 ERA.

Pitching Numbers Even Better in League Play: Valpo’s hurlers moved their ERA as a staff under three during Horizon League play, posting a 2.98 mark over the 30 league games.  Closer Jarad Miller led the way with a 1.37 ERA in 12 appearances during conference action, recording six saves.

Racking Up the Hits in May: Valpo tallied double figure hit totals in 12 of its 16 games during the month of May.  The Brown and Gold batted .343 during the month, including the Horizon League Tournament.  The Crusaders registered 10 or more hits in 20 of their last 29 games overall as well.  Valpo’s season high for hits in a game is 20 against both Butler (March 17) and Youngstown State (May 18).

Deetjen on Career Charts: Tyler Deetjen ranks third in Valparaiso history having logged 304.2 innings of work on the mound over his four years.  The southpaw just passed Tim Holmes (1984-1987) for a spot in the top three all-time.  Harvey Yergin (2004-2007) ranks second on the Crusaders’ innings pitched chart with 314.2, 10.0 ahead of Deetjen.  Deetjen’s 114.2 innings pitched this season set a new single record, passing Damon McCormick’s mark of 114.1 set last year.

No Free Passes Here: Valpo’s pitching staff ranks sixth in all of NCAA Division I allowing just 2.26 walks per nine innings of work this year.  Individually, Tyler Deetjen ranks fifth in the country with a 0.81 walk per nine inning rate, having issued just 11 free passes in 114.2 innings of work.  Deetjen also ranks 17th in the country with a 6.00 strikeout-to-walk ratio.

Quick Games: Valpo has played 22 games in 2:15 or less this season and 41 in 2:30 or under.  The Crusaders are averaging just 2:20 for their nine-inning games this year, and 2:28 overall, including two four-hour plus games of 15 and 16 innings.  Five times this year the Crusaders have played under two hours.

Closing Time: Jarad Miller picked back up where he left off after missing the last year and a half with an injury, adding to his school record-setting career save total.  Miller has recorded eight saves in 2012 and his 36 career saves are 22 more than any other player in program history.  Miller set the school’s single season record with 17 during his All-American season in 2009.  His 36 saves are tied with Wright State’s Michael Schum (2009-2012) for most career saves in Horizon League history.

Vavra and Mahoney Named Conference Hitters of the Week: Tanner Vavra was named the Horizon League’s Batter of the Week on Feb. 27 after hitting .583 (7-for-12) in the three-game series against #4 Arkansas.  Spencer Mahoney joined Vavra as a Hitter of the Week, garnering the accolade May 21 for the final week of the regular season.

Horizon League Pitchers of the Week: Tyler Deetjen was named the Horizon League’s Pitcher of the Week for the first weekend of play after his opening day performance and then picked up his second weekly accolade on March 6.  Kevin Wild earned the award three times himself after being named Pitcher of the Week on March 26, April 9, and April 23. Kyle Wormington was the latest Crusader hurler to pick up the accolade, doing so on May 7.

This and That: John Loeffler has reached base safely in 33 consecutive games dating back to April 3 ... the Crusaders played 11 extra inning games during the regular season, posting a 7-4 record ... Steven Scoby ranks fourth in school history with 226 career hits and eighth with 126 career runs ... Elliott Martin (third base) and Chris Manning (centerfield) are the only two Crusaders to start every game at the same position this season ... Tanner Vavra has 175 assists this year, setting a new Crusader single season record ... Andrew Bain’s 252 at bats this year are most by a Crusader in a single season all-time ... Will Hagel is two RBIs shy of moving into the top-10 all-time at Valpo, entering the tournament with 107 RBIs.