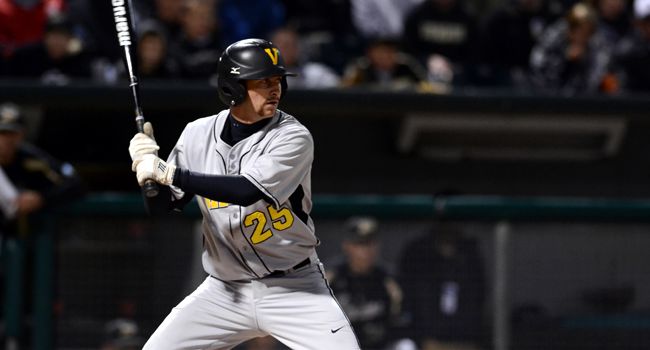 Valparaiso scored first and last on Friday evening into Saturday morning, but Purdue scored seven times in between as the 15th-ranked Boilermakers defeated the Crusaders 7-2 at U.S. Steel Yard in Gary, Ind. in the opening game of the NCAA Regionals in front of 5,047 fans.

Making its first appearance in the NCAA Division I Tournament appearance since 1968, the 7 p.m. start time was delayed until after 10:30 due to the length of the opener at U.S. Steel Yard, and lasted until nearly 1 a.m. Central time on Saturday morning.

“There is nothing you can really do but wait,” head coach Tracy Woodson said of the wait after the game.  “It is the same advantage or disadvantage for both teams.  I don’t think it was a factor in the game at all.”

Errors proved to be the Crusaders downfall on the evening though, as the Brown and Gold committed a season-high five miscues which led to six unearned Purdue runs.

“We didn’t play well tonight, and that’s what is disappointing,” Woodson added.  “We were excited about being here and people asked about our strengths coming in.  It has been pitching and defense.  (Tyler) Deetjen did what he’s done all year but errors killed us.  The six unearned runs were the difference in the game.”

Valpo had a scoring opportunity from the opening batter of the game, as Andrew Bain (Indianapolis, Ind./Park Tudor H.S.) laced a lead-off single to left and moved to second as a pickoff attempt went into the stands.  The Crusaders failed to convert though as Boilermaker starter Joe Haase recorded back-to-back strikeouts and a flyout to quickly end the threat.

After Tyler Deetjen (Saint Charles, Ill./East H.S.) retired the Purdue side in order in the first and Valpo went down 1-2-3 in the second, the Boilermakers threatened in their half of the second.  Ryan Bridges singled up the middle with one out and moved to third while David Miller took second on a two-out throwing error.  Deetjen induced a ground out off of the bat of Brandon Krieg to end the threat though, stranding the two runners in scoring position.

The Crusaders struck first in the top of the third inning as Billy Cribbs (Rochester, Mich./Rochester H.S.) lined a double off the top of the wall in left to start the frame and moved to third on Steven Scoby’s (Delton, Mich./Delton Kellogg H.S.) sacrifice bunt.  Bain then flared a single over the drawn in infield into right-center to plate Cribbs and give Valpo the early 1-0 lead.

Purdue answered with a pair of unearned runs in the bottom of the inning.  Cameron Perkins singled with two outs and Kevin Plawecki kept the inning alive reaching on a throwing error.  Barrett Serrato followed with a two-run double to the gap in left-center, putting the Boilermakers on top.

Valpo looked to answer in the fourth putting runners on second and third with just one out.  Will Hagel (Arlington Heights, Ill./Prospect H.S.) led off with a single, moved to second when John Loeffler (Burnsville, Minn./Burnsville H.S.) walked, and both runners moved up on a sacrifice bunt by Elliott Martin (Irvine, Calif./University H.S.).  A pop out and ground out ended the threat though.

Another unearned run in the Purdue half of the fourth inning allowed the Boilermakers to increase their lead to two.  Stephen Talbott lined a shot off of Deetjen with runners on first and second and two outs which he fielded.  The throw though was into the runner, and allowed Krieg to come around from second to score.

The Crusaders looked to fight back in the top of the sixth as Hagel reached on an error and Loeffler followed with a single, putting runners on the corners with none out.  However, Haase recorded back-to-back strikeouts and a lineout to escape the jam unharmed.

The Boilermakers then added to the lead in the sixth with two more unearned runs.  Cameron Perkins’ two out single to left scored David Miller, who reached on an error, as well as Andrew Dixon, giving Purdue a 5-1 advantage.

“The grass was soaking wet the entire game and I knew it was going to be a factor,” stated Woodson.  “We made more mistakes and they made more plays.”

An infield single by Sean McHugh in the bottom of the seventh plated Serrato, who doubled with one out in the inning.  David Miller followed with a RBI single up the middle, making it 7-1 Purdue.

Valpo found the scoreboard against in the eighth as Loeffler doubled with one out and scored on a two-out single into left-center by Cribbs.

Cribbs finished the game with a pair of hits, as did Loeffler and Bain, all part of Valpo’s nine-hit attack on the evening.  Purdue tallied 11 hits on the night, with Perkins and Serrato each driving home two runs.

The Crusaders had the leadoff man aboard in five of the nine innings, but left 11 runners on base total for the night, including six in scoring position.

Haase earned the win (11-1) for Purdue (45-12), allowing one run and six hits in seven innings of work while striking out seven.  Deetjen suffered the loss, despite allowing just one earned run.  He went 6.2 innings, surrendering the seven runs on 11 hits.  He fanned five and did not walk anyone.

“We have to be ready to go,” Woodson concluded of the short turnaround before playing again later on Saturday.  “We’ve had our backs against the wall a couple of times this year.  I’m not worried about how we’ll come out.  We’ll be ready to go.”

Valparaiso (35-24) will face #11 Kentucky on Saturday afternoon at 3 p.m. at U.S. Steel Yard in an elimination game after the Wildcats fell 7-6 to Kent State in Saturday’s opening game.  The game lasted 21 innings, the second longest in NCAA Tournament play.  The game can be heard live on WVUR (95.1-FM, Valparaiso) and online at valpoathletics.com.  The Crusaders and Wildcats have never met on the baseball diamond.

Game Notes: The game started 3 hours, 32 minutes late due to the length of the Kentucky-Kent State game which proceeded it … the game, which was televised live on the Big Ten Network, was the first time a Valpo baseball game was broadcast on national television … Purdue leads the all-time series 64-18 and has won five straight games between the two schools … Valpo is now 2-11 all-time in the regionals … Loeffler extended his on base streak to 34 consecutive games with his 31st walk of the season in the fourth inning … Loeffler also singled in the sixth to extend his hitting streak to 11 straight games … Tanner Vavra (Menomonie, Wis./Menomonie H.S.) was hit by a pitch in the fifth inning for the 22nd time this season, setting a new school record which was previously held by Eric Snyder in 2003 … Bain had two hits and now has 80 on the year, fifth most in a single season in Crusader history … Deetjen now has thrown a school record 121.1 innings this season … Deetjen has 311.1 career innings, third most in school history.