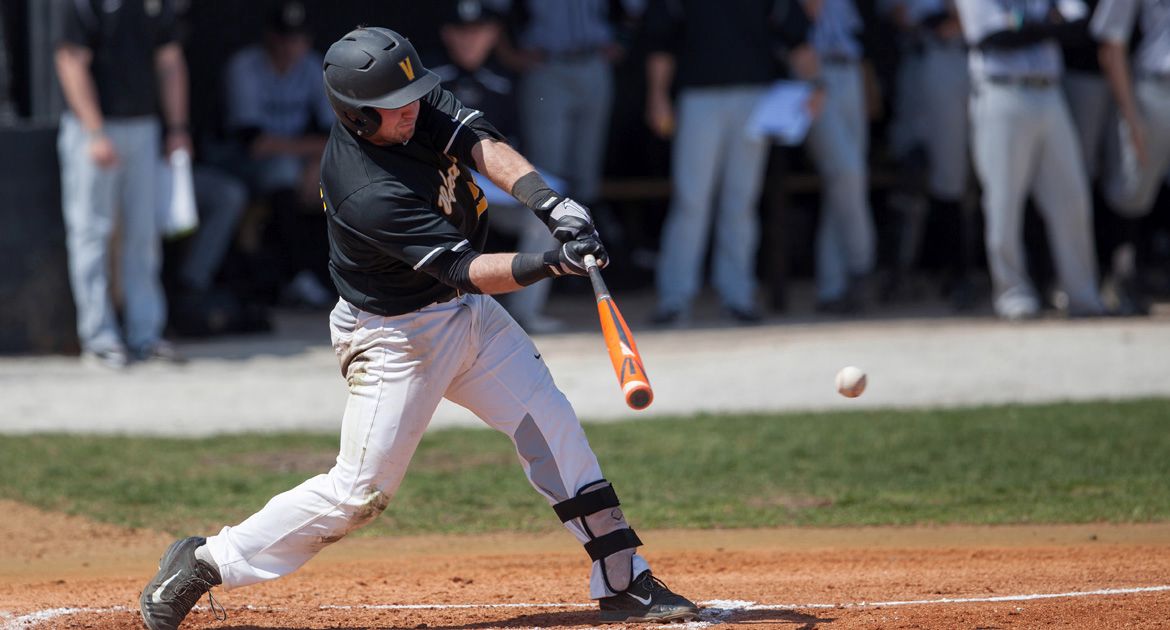 For the third straight day, the Valpo offense put a crooked number in the third-inning run column. Starting pitcher Mario Losi (Anaheim, Calif./Canyon) made it stick this time.

Valpo wasted no time giving its starter a comfortable cushion, assembling a four-run first inning, rendering all the damage with two outs.

Nate Palace (Westlake Village, Calif./Oaks Christian) reached on a throwing error by JSU starter Colton Pate. Dan Delaney (Thousand Oaks, Calif./Thousand Oaks [Fresno State]) took a five-pitch walk before Clark loaded the bases with an infield single. Molitor subsequently cleared them with a double into the left-field corner. Molitor came into score on the next at-bat when Sam Shaikin (West Hills, Calif./Chatsworth) sent a Pate offering back up the box for a 4-0 Valpo lead.

Losi was tested right out of the chute by Gamecocks' leadoff batter Gavin Golsan. The two engaged in an eight-pitch series before Losi got the JSU center fielder to foul out. He erased a one-out single by inducing an inning-ending 4-6-3 twin-killing.

Losi faced the minimum again in the home half of the second to keep the Jacksonville State bats silent. The next time he returned to the mound, the junior had a 12-0 lead to work with.

The first five batters reached for Valpo in an eight-run third. Palace popped the lid on the frame with a leadoff double to left. He came around to score on an RBI single off the bat of Clark. With the bases loaded, Shaikin reached on an error at shortstop that made it 6-0. Jeff Edwards (Massillon, Ohio/Jackson) delivered with a two-run single to center, his second in as many games. Edwards' knock chased Pate as reliever Michael McCreless took over on the hill for the Gamecocks.

Edwards was able to trot on home after James Stea (Los Alamitos, Calif./Los Alamitos [Golden West]) greeted the right-hander with a two-run blast to left that pushed the Crusader lead to 11-0.

Losi showed no signs of fatigue after an extended layover in the dugout. He set the tone with a three-pitch strikeout to Austin Green, the first batter he faced in the third.

He didn't allow a Gamecock past first base until the sixth inning, when the home team finally wrestled its way into the run column. Paschal Petrongolo plated two with a double, a hit that represented the big blow in a four-run JSU sixth.

Valpo got one of those runs right back in the top half of the seventh. Delaney sent a Nate Sylvester delivery the other way for a one-out double. Two batters later, Molitor tabulated his fifth RBI of the day with a single up the middle that scored the Crusader designated hitter.

Bryce Yoder (Spencerville, Ind./Eastside) took over for Losi in the seventh. Losi pounded the strike zone for six innings, accumulating 60 strikes in 86 pitches. He punched out six Gamecocks without walking a batter, and yielded the four runs on five hits.

The 14-4 victory gave the Brown and Gold a plus-3 run differential on the weekend. Valpo also edged out a 39-38 advantage in the hit department for the series. The Crusaders scored 27 runs over the three games, 18 of which came in the third inning.

Valpo (1-2) will return to Northwest Indiana before heading south of the Mason-Dixon Line again next weekend. The University of New Orleans Privateers (3-0) welcome the Brown and Gold for a three-game set beginning Friday in the Big Easy. First pitch from Maestri Field is scheduled for 6:30 pm CT. Audio and live stats will be available courtesy of UNO Athletics.