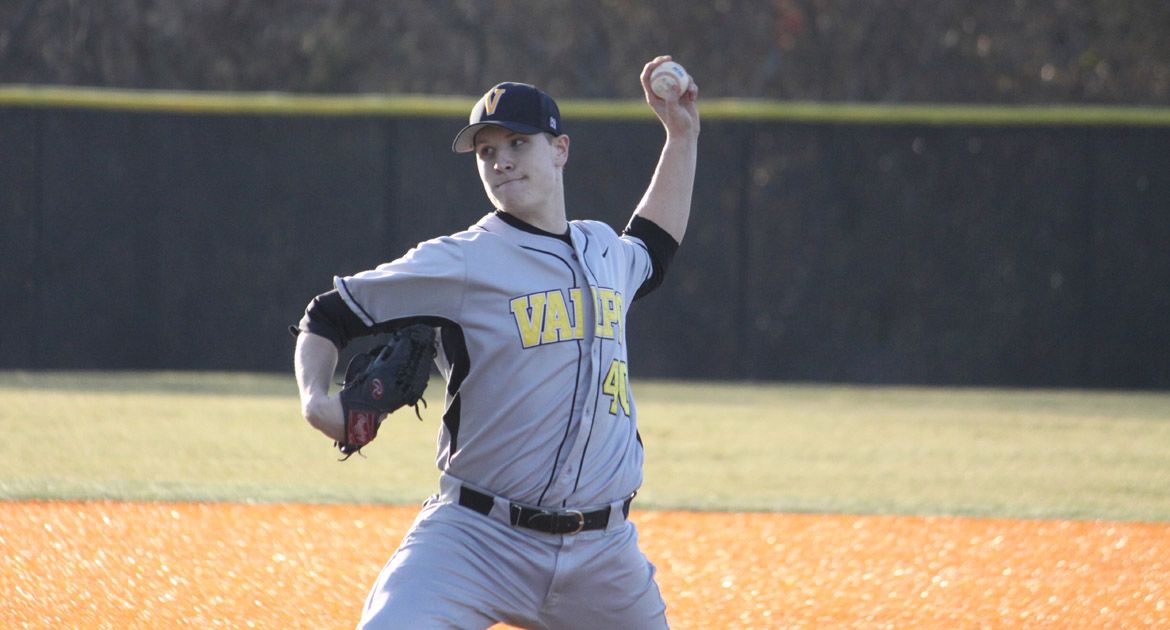 Dalton Lundeen earned the win Friday after throwing seven innings of three-run ball vs. Louisiana Tech in an 8-3 victory over the Bulldogs. (Gardner Webb Athletics)
Valpo at Louisiana Tech | March 04, 2016

Fresh off a 3-2 win Wednesday over #12 Arkansas in Fayetteville, Louisiana Tech returned home with a collective 3.39 earned run average and a .320 batting average. Valpo ace Dalton Lundeen (Streamwood, Ill./Streamwood) greeted the Bulldogs by spotting them just three runs over seven strong innings while the Crusader offense racked up ten hits in an 8-3 win versus LA Tech in the series opener.

Lundeen met fellow left-hander Phillip Diehl, who entered Friday's contest with a 0.84 ERA and 17 strikeouts in 10 2/3 innings. The numbers mattered not once the National Anthem was recited.

Lundeen retired the first seven Bulldogs he faced. LA Tech's Garrett Dodd broke the seal with a one-out double to right in the home half of the third. Chandler Hall followed with his second homer of the season to cut the lead to 3-2.

Dodd poked Lundeen and the Crusaders for a third run in the bottom half. Taylor Love was on the verge of being stranded after a leadoff single, but Dodd doubled the left fielder home with two away.

LA Tech gifted the Brown and Gold an insurance run in the visitor's half of the fifth. Nate Palace (Westlake Village, Calif./Oaks Christian) got aboard with one out thanks to an E6. A Nolan Lodden (West Des Moines, Iowa/West Des Moines Valley [Heartland CC]) single moved the junior to second base before he scooted over to third on a Clark's fielder choice. With runners on the corners with two outs, a Graham Alhrich offering eluded Bulldog catcher Brent Diaz and allowed Palace to make it 5-3.

Lundeen worked efficiently with the two-run lead, keeping his pitch count low, allowing him to take the hill past the seventh-inning stretch.

A Lodden RBI single and a two-run double by Delaney in the top half of the seventh made the decision that much easier. Lundeen reinforced the non-move with a 1-2-3 bottom of the seventh.

Senior Trevor Haas (Mt. Prospect, Ill./Hersey) carried the baton for Lundeen. The righty struck out the first two batters he met in a perfect frame.

Sophomore Luke VanLanen (Pulaski, Wis./Pulaski) held down the fort in a scoreless ninth to give the Crusaders their third win of the season, a trademark triumph.

Lodden and Delaney both cracked three hits and scored a run. Palace touched home twice. Valpo played its second flawless game in the field en route to the 8-3 victory.

Lundeen returned to form in his first W of 2016. He scattered nine hits over seven innings while ringing up six batters opposite zero walks.

Valpo (3-6) will go for the series win tomorrow versus Louisiana Tech (6-3) at 2 pm at J.C. Love Field. Links to the audio, video, and live stats are available at ValpoAthletics.com.