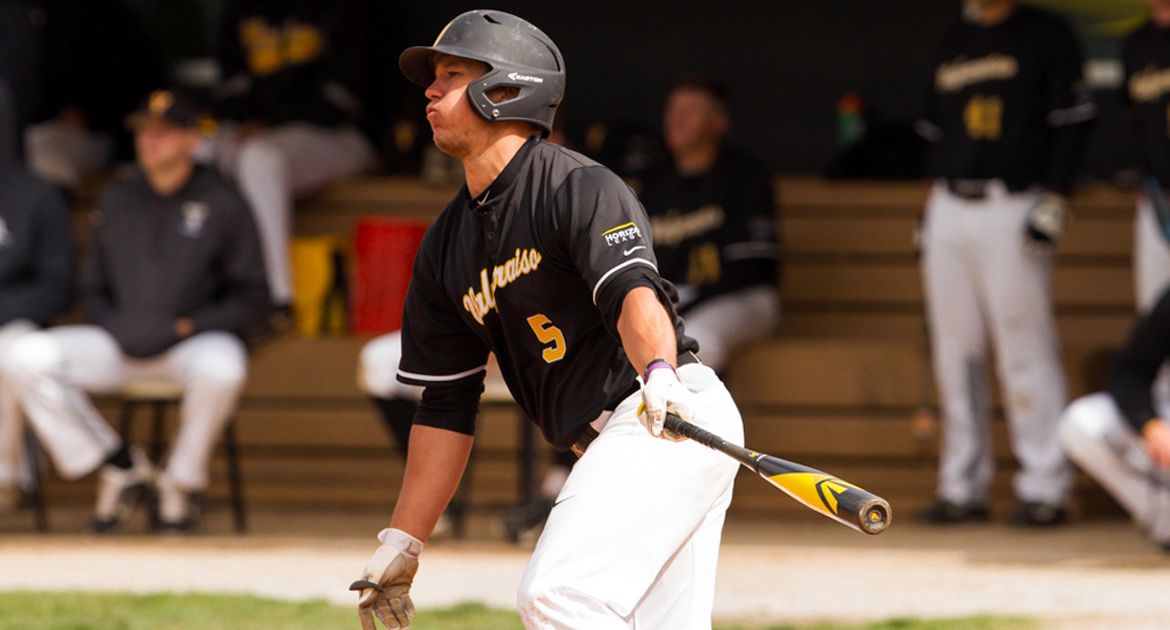 This Week in Crusader Baseball: Valpo returns to the Lone Star State for the second time in three years as it readies for a four-game series with Dallas Baptist. The Patriots have made five NCAA appearances including a cameo in the 2011 Super Regionals. Texas native Ellis Foreman will get the start in Wednesday’s opener.

Last Time Out: Behind a stellar start from Dalton Lundeen, the Crusaders took the opening tilt of a three-game series against Louisiana Tech. The Bulldogs answered back with wins on Saturday and Sunday, though, to claim the set from Valpo. Dan Delaney put the finishing touches on a week that saw him crack six doubles and drive in eight runs.

On the Air: Live audio and video streaming of all three games will be available free of charge courtesy of Dallas Baptist Athletics. Live stats will also be available. Links to all three are available at ValpoAthletics.com.

Series Notes: This weekend will be the first-ever matchup between Valpo and Dallas Baptist.

In the Other Dugout: At 8-3, Dallas Baptist appears to be on its way to another monster season. The Patriots checked in at No. 25 in Collegiate Baseball’s most recent Top 30 poll. DBU finished 2015 with the nation’s No. 1 RPI following its 46-15 campaign. They’re coming off a three-game sweep of #24 New Mexico in Albuquerque last weekend. The Patriots scored 33 runs in the Saturday game alone, and they’re beginning to re-capture the college baseball world’s attention here in 2016.

Second baseman Luke Stratman wasn’t even in the starting lineup in the team’s season opener against Iowa, but he received a pinch-hit opportunity in the second game and has run wild with the opportunity ever since. Stratman is fifth in the nation in batting average at .519 and the Lamar Community College transfer has already jacked three home runs. He’s the ringleader of an offense that owns a collective .341 batting average, the seventh-highest in Division I baseball. Darick Hall, DBU’s starter in the Friday game, is an excellent two-way player. The lefty-swinging, right-throwing transfer has slashed .386/.462/.727 with four home runs and 19 RBIs at the plate and struck out 17 batters in 17 2/3 innings on the hill.

Dallas Baptist’s pitching staff has recorded a 4.78 earned-run average through 11 games. The aforementioned Darick Hall is 2-0, while lefty Colin Poche has surrenedered just two runs in 17 innings thus far. Opponents are batting .175 off him. Fellow southpaw Jordan Martinson has one-upped Poche in the OBA department as he’s limited batters to a .158 average. Right-hander Dalton Higgins has yielded 23 hits in 10 innings en route to a 12.60 ERA. Higgins has already served up three home runs. Closer Seth Elledge has four saves on the season.

Dan Heefner is in his ninth season as head coach of the Patriots. Heefner owns a 310-171 record in Dallas. In his first eight seasons, the Olivet Nazarene grad had 32 players selected in the Major League Baseball Draft. Heefner led the Patriots to a program-record 46 wins last season. In 2013, Baseball America lauded him as one of the Top 10 Coaches in College Baseball under the age of 40.

Patriots in the Pros: Dallas Baptist boasts a rich baseball pedigree and that couldn’t be more evident when one looks at former DBU players in and around Major League Baseball. Noah Syndergaard, Ben Zobrist, Freddy Sanchez, Lance Broadway, Lew Ford, Ryan Goins, and Jason LaRue were all Patriots during their collegiate years.

Driftless Drivel: Senior Dan Delaney enters this series second in the country in doubles (8), just one behind Mississippi State’s Jack Kruger for the national watermark..Valpo has scored 43 of its 70 runs in the first three innings...Josh Clark is batting .611 (11-for-18) with two outs...Thursday starter Trevor Haas has limited right-handed batters to a .217 (5-for-23) average...sophomore Chet Joslyn has appeared in six of the team’s last seven games...rookie Scott Kapers threw out three potential base stealers last week and picked off another two...the Crusader defense has the 11th-lowest fielding percentage in Division I baseball (.939).