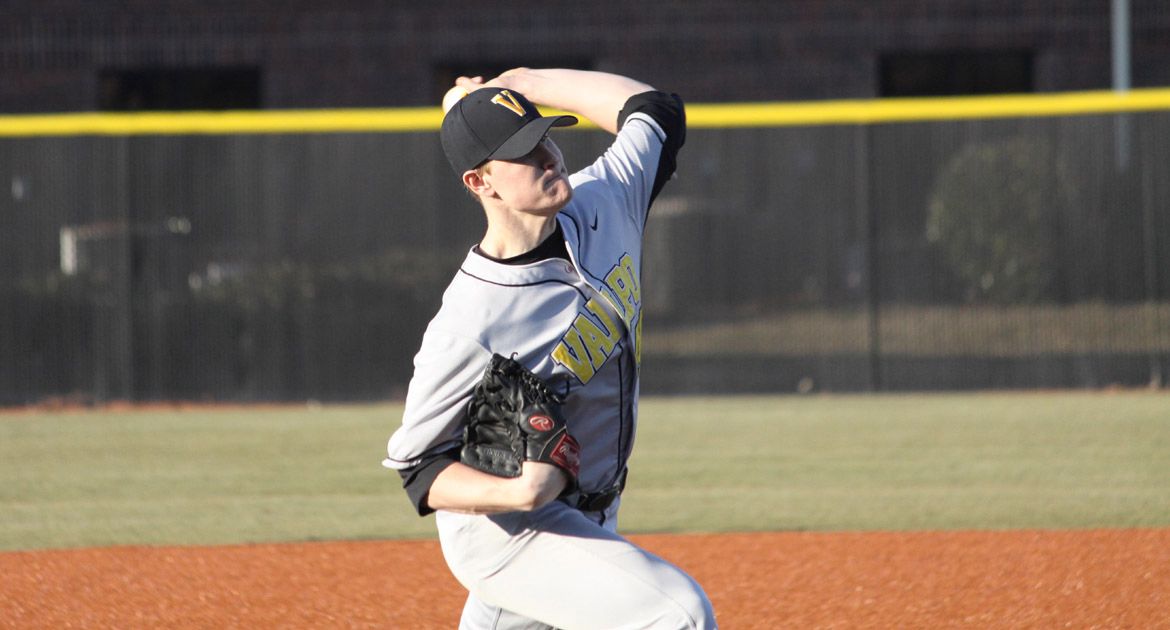 Lundeen experienced a rare hiccup in the bottom of the second when he issued a one-out walk to Austin Listi, but the left-hander quickly atoned with an inning-ending 4-6-3 double play.

The Valpo offense gave its ace some breathing room in the fourth with a pair of runs off DBU starter Darick Hall. Dan Delaney (Thousand Oaks, Calif./Thousand Oaks [Fresno State]) opened the frame by reaching on an error at third base. The Crusader designated hitter advanced to second base two batters later when Shea Molitor (Plymouth, Wis./West Lutheran) sent a two-strike single to center. After Jeff Edwards (Massillon, Ohio/Jackson) followed Molitor's cue by cracking a single to right to load the bases, freshman Scott Kapers (Schererville, Ind./Mt. Carmel) delivered the big blow with a two-run single up the middle. For Kapers, it was his second straight game with two runs batted in.

Lundeen showed his appreciation for the run support by retiring the Patriot side in order in both the fourth and fifth innings. A club that entered the evening 10th in the nation in batting average (.333) and 8th in hits (157) found itself with a doughnut in the hit column when the sixth inning commenced.

With the no-no bid intact, Lundeen was ahead in the count 2-2 on Daniel Sweet, the leadoff man in the sixth, before the Dallas Baptist left fielder fisted a soft liner over Molitor's head at second base. After a batter's interference call put an out on the scoreboard, catcher Garrett Wolforth sent a clean single through the left side of the infield. Lundeen issued a walk to Justin Wall that forced the bases loaded. Jameson Hannah made it a 2-1 game with a sacrifice fly to left-center field. Lundeen coerced a Trooper Reynolds fly out to end the inning, and, ultimately, DBU's final legitimate threat of the evening.

Josh Clark (Granada Hills, Calif./Hillcrest Christian [Riverside City]) put the Crusaders ahead for good with a two-run double in the visitor's half of the seventh. His third two-bagger of the season plated James Stea (Los Alamitos, Calif./Los Alamitos [Golden West]) and Nolan Lodden (West Des Moines, Iowa/West Des Moines Valley [Heartland CC]), whom had both reached base via singles.

Molitor tacked on another run in the frame when he peppered the left-field line with a single that allowed Clark to sprint in from second.

Lundeen shooed away singles in the seventh and eighth innings to persevere the five-run margin. He worked a 1-2-3 bottom of the ninth for his first complete game since his seven-hit shutout of Youngstown State in the 2015 Horizon League Championship. 24 of the 32 batters Lundeen faced received first-pitch strikes.

Overall, Friday was Lundeen's seventh complete game in a Valpo uniform. He lowered his season ERA to 4.72 in the process.

Valpo (4-10) will aim for the series split with Dallas Baptist (10-4) tomorrow afternoon at Horner Field. First pitch is slated for 2:00 pm CT. Links to the audio, video, and live stats are available at ValpoAthletics.com.