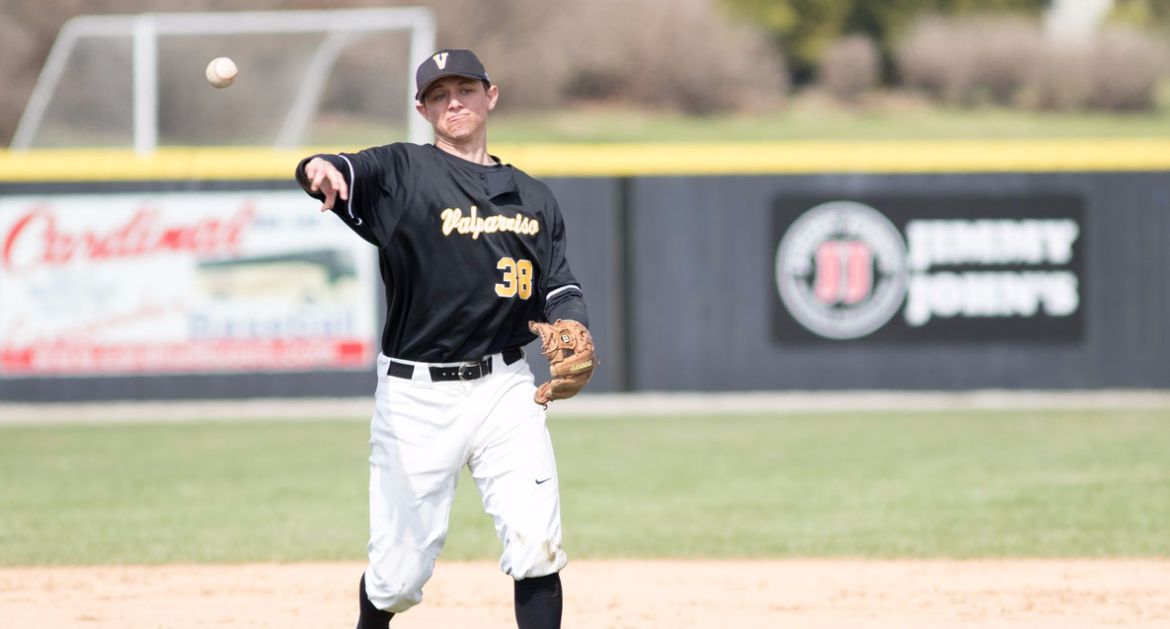 Chad Jacob was 1-for-3 with a double and an outstanding defensive play in Tuesday's game versus Ball State. (Avery Davis)
Ball State at Valpo | March 29, 2016

Valpo led visiting Ball State for five innings on Tuesday, but a two-run homer helped the Cardinals to a 3-2 victory at Emory G. Bauer Field. Ellis Foreman (Round Rock, Texas/Stony Point) spotted the Cards just one earned run in 5 1/3 innings, but an offensive lull in the middle frames hamstrung the Brown and Gold.

The Crusaders scratched a run across in the first without recording a hit. Freshman Chase Dawson (Chesterton, Ind./Andrean) popped the top on the home half of the first with a leadoff walk. He advanced to second on a Nolan Lodden (West Des Moines, Iowa/West Des Moines Valley [Heartland CC]) hit by pitch. Ball State starter Brendan Burns helped himself out when he induced a 4-6-3 double play off the bat of Nate Palace (Westlake Village, Calif./Oaks Christian). Dawson moved over to third on the twin-killing. With Dan Delaney (Thousand Oaks, Calif./Thousand Oaks [Fresno State]) at the plate, Burns uncorked a wild pitch that allowed the Valpo third baseman to score.

Foreman mowed through Ball State during the first five innings. He retired the leadoff man in the top of the sixth, but Alex Maloney got aboard on a throwing error at third base. Sean Kennedy made the miscue hurt when he smacked his second home run of the season over the wall in left field. His round-tripper tied the game at 2-2.

The Valpo offense went hitless from the fifth through eighth innings.

Delaney snapped that skid with a leadoff single in the ninth, but he was erased on a game-ending double play.

The Crusaders (8-14, 4-2 Horizon) will return to the diamond Wednesday night in West Lafayette. Purdue (4-17) will host the Brown and Gold at Alexander Field at 6:00 pm ET/5:00 pm CT. WVUR (95.1 FM, Valparaiso) will carry the action live with live stats also available.