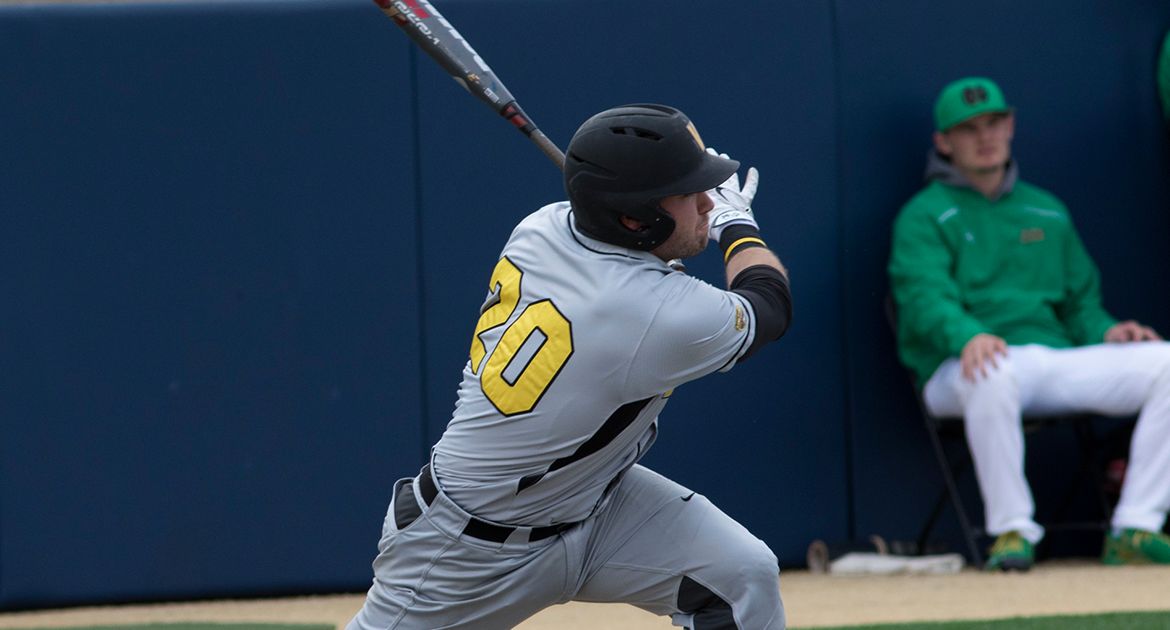 It was Molitor again who was responsible for Valpo's second run. Clark had gotten aboard in the visitor's half of the third with his second hit of the day. He went first-to-third on a botched pickoff attempt by Oakland starter Tyler Palm. Molitor split the shortstop and third baseman with a one-out single that gave the Crusaders a 2-0 lead after two and a half innings.

Oakland got one of those runs right back in the bottom half. Golden Grizzly catcher Matt DiLeo singled, swiped second, and advanced to third on a fielding error - all with one out. Outfielder Zach Sterry stroked a run-scoring single to right that plated DiLeo.

Valpo starting pitcher Mario Losi (Anaheim, Calif./Canyon) befuddled the Oakland batting order early on with an assortment of changeups; however, a leadoff walk in the fifth signaled the beginning of the end of his outing. Designated hitter Chris Van Dyke worked the base on balls before moving up 90 feet on a wild pitch. DiLeo followed with what appeared to be an innocent ground ball to third base. The ball took an Oakland hop, though, and Molitor was unable to corral it. Two batters later, Brosseau greeted Bryce Yoder (Spencerville, Ind./Eastside) with an opposite-field three-run blast on an 0-2 pitch. The shortstop's seventh home run of the season gave the Golden Grizzlies their first lead of the weekend.

Oakland tacked on a run in the sixth after Ben Hart singled home Ian Yetsko. Yetsko led off the home half with a triple into the right-field corner.

Lodden slapped a one-out base hit in the seventh that chased Palm. Reliever Collin Gee retired the first Crusader he faced, but Molitor was back for more. Molitor laced a ball down the left-field line that went for two bases and his third RBI of the day.

The Crusaders would never get closer than the two-run deficit, though. Lucas Scocchia and Nate Green combined to blank Valpo in the eighth and ninth innings.

Losi (2-4) was dealt the loss despite yielding one earned run over four innings. He did allow six hits and two walks, but struck out three. Lodden was 2-for-5 with two runs scored while Clark was 3-for-5 including his first-inning double.

Valpo (13-17, 7-4 Horizon) continues its eight-game road trip Wednesday afternoon in the Windy City. Chicago State (7-27, 1-10 WAC) plays host to the Brown and Gold at 3:00 pm CT. WVUR (95.1 FM, Valparaiso) will have the call while live stats will also be available. Links to those are posted at ValpoAthletics.com.