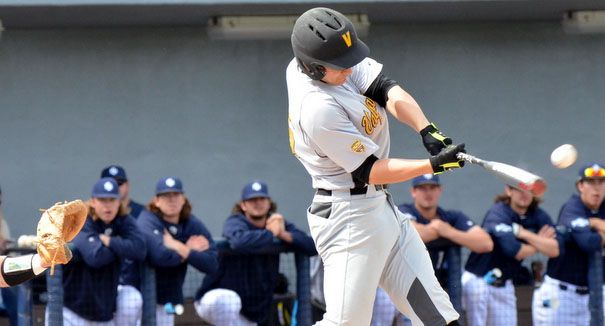 Wright State ascertained its lead in the Horizon League standings Friday with a doubleheader sweep of the Valpo baseball team at Nischwitz Stadium in Dayton, Ohio. The Raiders required rallies in both as they downed the Crusaders 8-2 in the opening tilt before assembling a late comeback as part of an 11-10 victory.

Hours after being named to the CoSIDA Academic All-District Team, Nolan Lodden (West Des Moines, Iowa/West Des Moines Valley [Heartland CC]) recorded Valpo's lone extra-base hit during a 2-for-2 performance at the plate that included a pair of hit by pitches. It was his run in the sixth inning that gave the Crusaders a 2-1 lead. He crossed the plate on a hot-shot off the bat of Josh Clark (Granada Hills, Calif./Hillcrest Christian [Riverside City]) that caromed off first baseman Gabe Snyder's glove and into right field.

Cramping in Dalton Lundeen (Streamwood, Ill./Streamwood)'s left calf caused the left-hander to prematurely exit Friday's opener. He scattered three hits over 5 2/3 innings while allowing just two earned runs. He did not factor into the decision for the third consecutive outing.

Wright State teed off on the Valpo bullpen as the Raiders posted six runs on ten hits over the final two innings. Snyder's solo shot to right proved to be the game winner.

Shea Molitor (Plymouth, Minn./West Lutheran [Des Moines Area CC]) registered the lone RBI for the Brown and Gold, his 45th of the season.

Bryce Yoder (Spencerville, Ind./Eastside) was saddled with the loss in relief of Lundeen.

The tides appeared to turn in the second game as the Crusaders exploded for 10 runs in seven innings. However, for the second time this week a 10-4 lead resulted in an 11-10 defeat.

The Raiders made a huge dent in the lead in the home half of the seventh. Five WSU runners touched the plate, three of which came on bases-loaded walks. After a Sean Murphy single opened the bottom of the eighth, Snyder hit his second game-winning home run of the afternoon.

Palace singled in his final at-bat in the ninth to cap off a 4-for-4 performance, but he was stranded after Zane Collins coaxed the final out of the game on a fly out to left.

Valpo (20-23, 11-9 Horizon) will head back to Emory G. Bauer Field to prep for a Sunday doubleheader with Northern Kentucky (16-29, 5-17 Horizon). First pitch is scheduled for 12:00 pm CT. Links to the audio and live stats are available at ValpoAthletics.com.