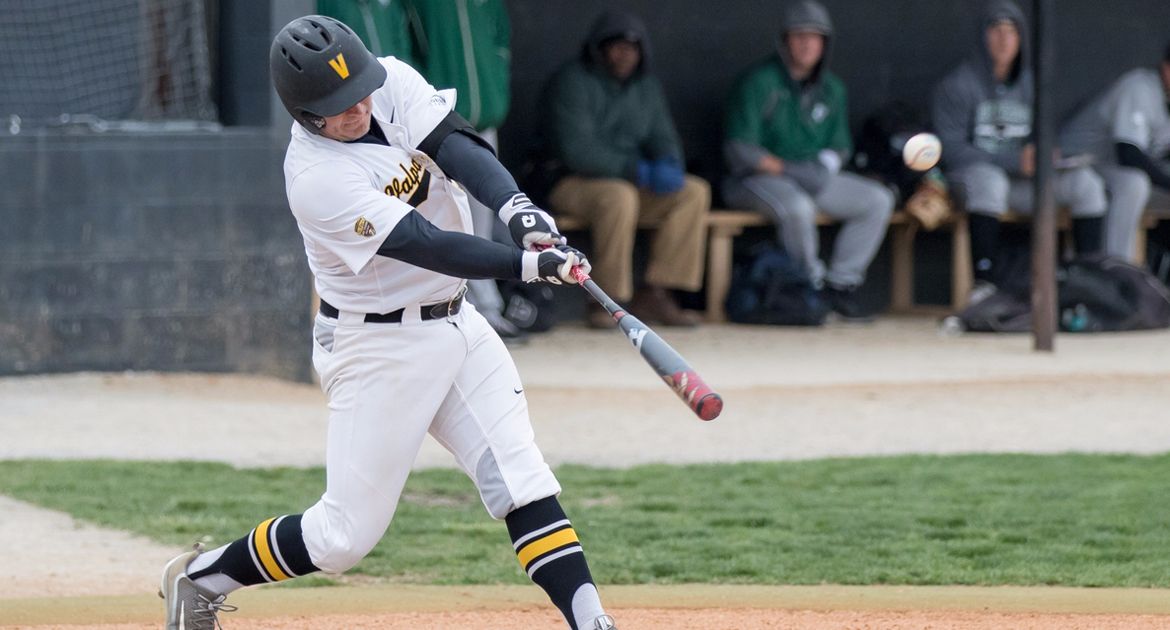 Dan Delaney (Thousand Oaks, Calif./Thousand Oaks [Fresno State]) delivered a pair of three-run homers in a 13-10 victory over visiting Purdue on Wednesday. The senior struck in the third and sixth innings to help the Crusaders snap a seven-game slide. Delaney reached the 40-RBI plateau in Valpo's final midweek tilt of the season.

For the tenth time this season, Valpo was victorious when playing from behind. The Boilermakers got out to a 2-0 lead thanks to a two-run double off the bat of designated hitter Daniel Sander. Sander, who entered the day 8-for-38 on the season, constructed a 5-for-5 day at the plate that included three doubles.

James Stea (Los Alamitos, Calif./Los Alamitos [Golden West]) single-handedly manufactured Valpo's first run of the afternoon. After drawing a four-pitch walk to open the home half of the first, the Crusader center fielder stole second and third base on consecutive pitches. He crossed the plate on the very next pitch as Shea Molitor (Plymouth, Minn./West Lutheran [Des Moines Area CC]) sent a grounder to shortstop for his 47th RBI of the season.

Purdue posted a single run in the second and two in the third to hold a 5-1 lead after two and a half innings. Delaney and the Crusaders responded with the first of two crooked numbers.

The error on Lodden's ball extended the inning to Delaney who rifled a 3-1 delivery from Mike Lutz off the Emory G. Bauer Field scoreboard in center. Delaney's sixth round-tripper of the season gave Valpo a 6-5 lead heading into the fourth.

Purdue captured a 10-6 advantage by virtue of a three-run fifth and a pair of tallies in the sixth.

Just when it appeared to be same song, second verse for the Brown and Gold in the mid-week, seven Crusaders crossed the plate in a raucous bottom of the sixth.

The first two batters reached thanks to walks before Stea shot a single up the middle to score both Patrick Donohue (Arlington Heights, Ill./Prospect) and Hanson. Lodden followed with his 31st RBI of the season on a base hit up the middle, scoring Stea. Clark tied the game at 10-10 with a single through the right side.

With two men on and one away, Delaney clobbered an Eddie De LaRiva offering over the wall in left-center field, running the score to 13-10.

Bryce Yoder (Spencerville, Ind./Eastside) and Ryan Fritze (Woodbury, Minn./Woodbury [Des Moines Area CC]) restored order on the mound for the Valpo bullpen as Purdue was held scoreless over the game's final three frames. Chet Joslyn (Battle Creek, Mich./Lakeview) was awarded the win while Fritze earned his fourth save of the 2016 campaign.

The Crusaders won for just the third time this season when being out-hit by their opponent. The Boilermakers amassed 17 hits in the contest, but came up empty down the stretch.

Valpo (21-25, 11-11 Horizon) will travel to Ohio on Friday to face Youngstown State (11-31, 4-15 Horizon). It'll represent the first meeting of the spring between the Crusaders and Penguins. First pitch of Friday's doubleheader from Eastwood Field is scheduled for 11:00 am ET/10:00 am CT. wVUR (95.1 FM, Valparaiso) will have the call with live stats also available. Links to both are posted at ValpoAthletics.com.