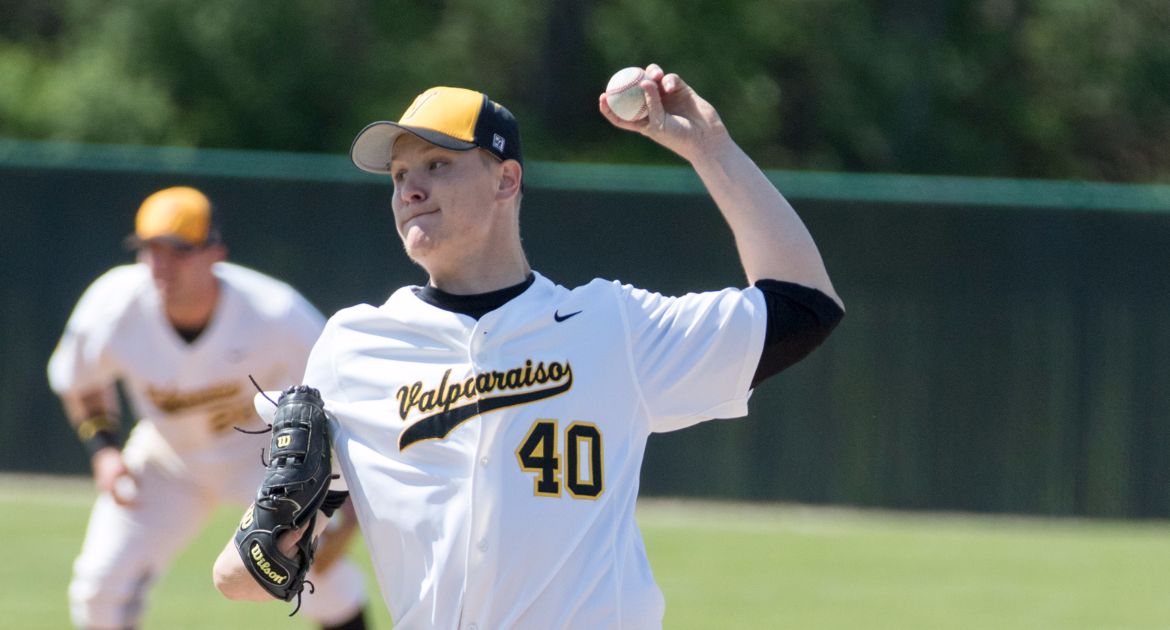 In his final game at Emory G. Bauer Field, senior Dalton Lundeen (Streamwood, Ill./Streamwood) executed a mic drop to the tune of a four-hit shutout over Youngstown State on Thursday afternoon.

The southpaw tallied his fourth career shutout on a 107-pitch opus. He restrained YSU to four singles and did not walk a batter. While Lundeen punched out only one Penguin, what he sacrificed in strikeouts, he made up for in efficiency.

Lundeen worked with a cushion for the majority of the afternoon thanks to three early runs from the offense.

Nate Palace (Westlake Village, Calif./Oaks Christian) slid across the plate just ahead of the throw from left field on a single off the bat of Jeff Edwards (Massillon, Ohio/Jackson) in the bottom half of the second.

Shea Molitor (Plymouth, Minn./West Lutheran [Des Moines Area CC]) recorded his 50th run batted in of the season in the home half of the third when he sent a soft grounder towards first base. Chase Dawson (Chesterton, Ind./Chesterton), who opened the frame with a single, came in from third base. Josh Clark (Granada Hills, Calif./Hillcrest Christian [Riverside City]) drove in his 40th run of the season in the next at-bat when he sent a fly ball to center that served as a sac fly.

YSU assembled its lone scoring threat in the fourth. Lundeen retired the first eleven Penguins he faced until Andrew Kendrick singled to center field. Kendrick was rounding third base two batters later when Trey Bridis lined a base hit to left, but Nolan Lodden (West Des Moines, Iowa/West Des Moines Valley [Heartland CC]'s throw from the outfield was right on the money as Scott Kapers (Schererville, Ind./Mt. Carmel) applied the tag to preserve the shutout bid.

The Crusaders added an insurance run in the seventh thanks to the speed of James Stea (Los Alamitos, Calif./Los Alamitos [Golden West]. The center fielder stole second base to move into scoring position for Lodden with one out. After Lodden lined out to left for the second out of the inning, Stea swiped third base and then sprinted home when Jonny Miller's throw eluded Nico Padovan.

Lundeen sent down the final eight men he faced in order. With the victory, the lefty improved to 7-1 with a 1.52 earned-run average in nine career starts versus Youngstown State. Lundeen lowered his 2016 ERA to 3.12 while pushing his record to 6-3. Thursday's win was the 21st of his Valpo career, one behind John Grippi (22) for third in program history.

With the triumph, Valpo (25-26, 15-12 Horizon) holds out hope for the No. 2 seed in next week's Horizon League Championship. The Crusaders picked up a game on UIC (23-27, 14-11 Horizon), which fell 4-3 to Wright State in 13 innings on Thursday. In order to obtain that second seed - and the highly-coveted first-round bye - Valpo needs to win both Friday and Saturday, and Oakland needs to defeat Milwaukee in the final two tilts of their series.