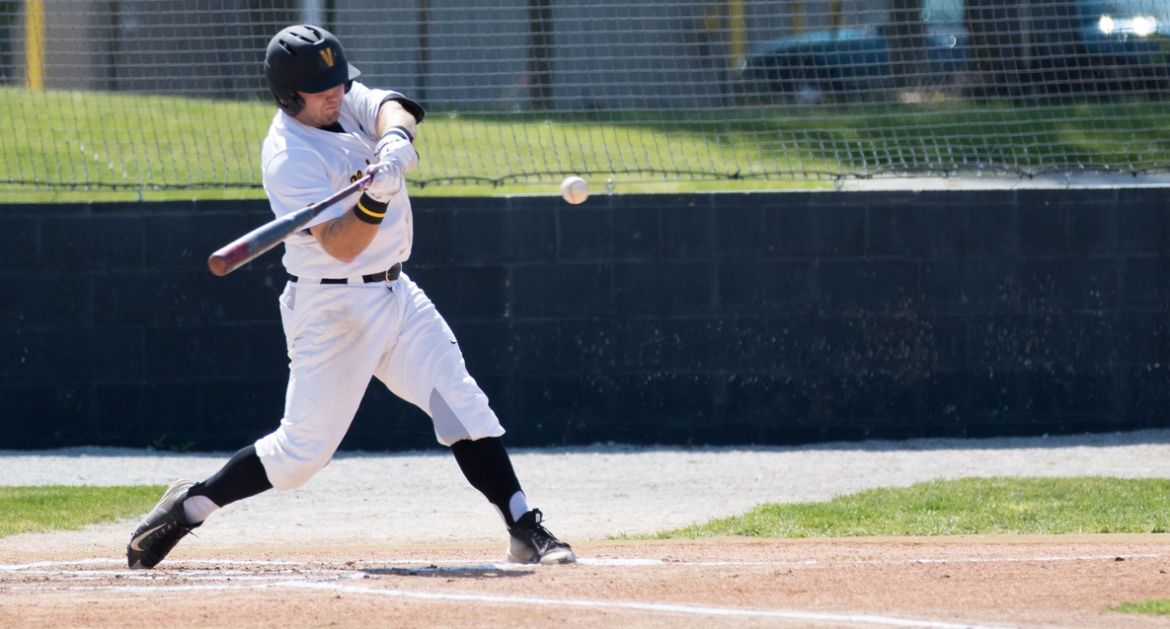 Senior Dan Delaney was 3-for-5 with two runs scored against Milwaukee on Thursday evening. (Avery Davis)
Valpo at Milwaukee | May 26, 2016

Valpo took a 5-3 lead into the seventh inning of their second-round contest against Milwaukee before the Panthers put together a five-run frame. The Crusaders fell 9-6 Thursday afternoon to set up an elimination game with the fourth-seeded UIC Flames on Thursday evening.

Milwaukee center fielder Luke Meeteer put the Panthers on top in the first when he hooked a two-run double into the left-field corner.

Trevor Haas (Mount Prospect, Ill./Hersey) settled in nicely after the home half of the first. The senior retired nine batters in a row at one point while the offense went to work against Brian Keller, the Horizon League Pitcher of the Year.

Chase Dawson (Chesterton, Ind./Andrean) took the first pitch of the third inning off the kneecap, a hit-by-pitch that marked the fifth straight plate appearance in which he reached base. He went to first-to-third on a James Stea (Los Alamitos, Calif./Los Alamitos [Golden West]) double to right. Lodden traded places with his fellow outfielder after he deposited a double of his own down the left-field line. Lodden advanced to third base on a ground ball to the left side of the infield before coming in to score on an RBI ground out off the bat of Josh Clark (Granada Hills, Calif./Hillcrest Christian [Riverside City]).

Valpo added to its one-run lead in the top of the fourth thanks to a run-scoring single from Dawson. Delaney opened the frame with a base hit and moved up 90 feet on a Jeff Edwards' (Massillon, Ohio/Jackson) bunt. Scott Kapers (Schererville, Ind./Mt. Carmel) kept the line moving by legging out an infield single. The hit brought Dawson to the dish where he lined a one-out single to center.

Milwaukee got one run back in the fifth when Daulton Varsho sent a two-out double off the wall in left that scored Billy Quirke.

The Crusaders built their cushion back to two runs in their subsequent at-bat. Lodden collected his third RBI of the afternoon on a bases-loaded single through the right side. Keller worked out of the jam after inducing a ground out as Valpo stranded three.

Varsho flipped a 5-3 Milwaukee deficit into a 6-5 lead with one swing of the bat in the seventh. Quirke and Chris Kelly were aboard ahead of the Panther catcher when he lifted a three-run homer to left. UWM added two more in the inning to expand its lead to 8-5.

The Valpo offense kept chipping away as it pushed a run across in the eighth. Stea sent a laser to the gap in left-center that went for an RBI double. What should have been an inning-ending ground out to second base turned into an E4 which loaded the bases and extended the frame. Panther reliever Jake Tuttle escaped the jam, though, with a strikeout.

UWM responded with an insurance tally in the eighth before Tuttle worked a 1-2-3 ninth to seal the 9-6 win for Milwaukee.

The Crusaders stranded 11 total on the afternoon. Stea registered two doubles, a run scored, and an RBI atop the Valpo lineup.