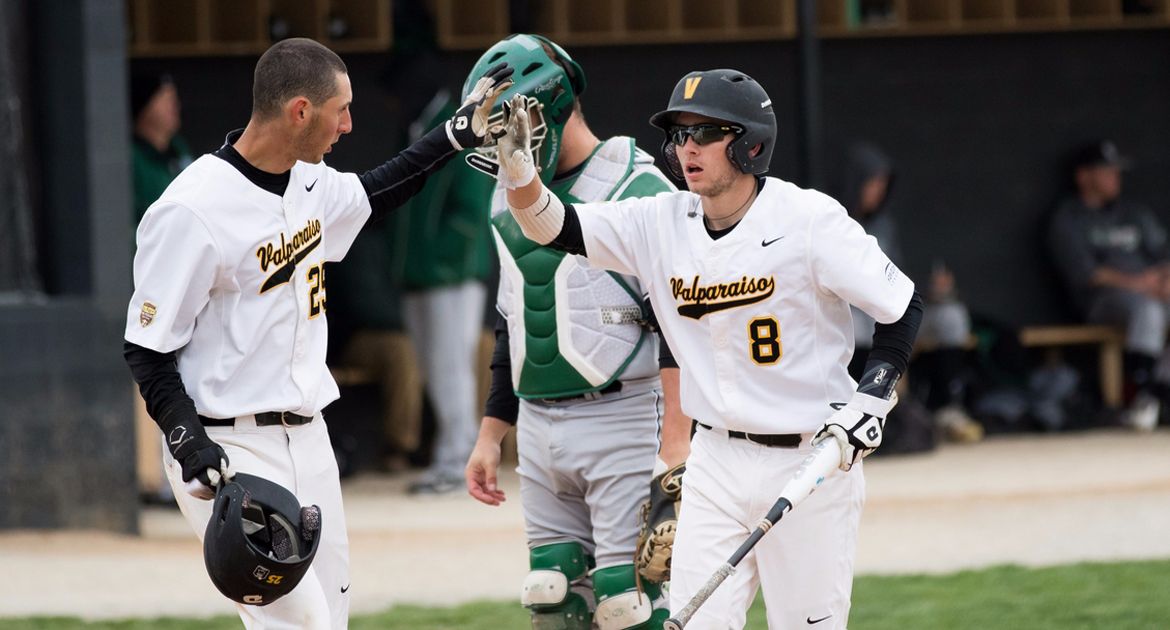 Down 6-0 after two innings in an elimination tilt with an overworked bullpen already activated, the coroner was en route to Nischwitz Stadium to identify the 2016 Valparaiso Crusaders.

An eighth-inning solo homer off the bat of freshman Scott Kapers (Schererville, Ind./Mt. Carmel) resurrected the Brown and Gold, and capped a roaring offensive rebuttal as memorable as it was loud. The Crusaders scored 12 of the game's final 13 runs while the bullpen surrendered a lone unearned run over eight frames in a signature 12-7 victory over Milwaukee Panthers in Game 7 of the Horizon League Baseball Championship.

Valpo advances to the Horizon League Championship finals where it will have to defeat Wright State twice to earn the league's automatic berth into the NCAA Tournament.

Milwaukee loaded the bases with one out in the first against Valpo starting pitcher Grant Inman (Fort Wayne, Ind./Carroll). Third baseman Nick Unes slapped an opposite-field RBI single before Cole Heili worked a walk that forced in the Panthers' second tally. Eric Solberg made it 3-0 with a sacrifice fly to center.

Horizon League Player of the Year Daulton Varsho expanded UWM's lead to 5-0 following a two-run double right-center field. Luke Meeteer clubbed a sac fly in the next at-bat to put the Crusaders behind by half a dozen.

Dan Delaney (Thousand Oaks, Calif./Thousand Oaks [Fresno State]) lowered some jaws in the visitor's half of the fourth when he belted a two-run bomb bound for the highway past the left-center field wall. His eighth dinger of the year made it 6-3.

Milwaukee was poised to push its lead back to four runs in its half of the fourth. Meeteer slugged a leadoff double, but Dirienzo stranded him on third when he coaxed an inning-ending grounder from Mike Jordahl.

UWM got the run right back in the sixth on a Meeteer RBI single. Right-handed pitcher Bryce Yoder (Spencerville, Ind./Eastside) inherited a highly-flammable situation with one out, but kept MKE to just that one run despite the Panthers having a pair in scoring position with less than two outs. Milwaukee stranded the bases loaded after Yoder induced a ground out to first that ended the threat.

The Crusaders had deleted the deficit by the time the seventh-inning stretch occurred thanks to a three-run frame.

Chase Dawson (Chesterton, Ind./Andrean) and Stea were in scoring position when Lodden plated them with a double the other way. After a Molitor single sent Lodden over to third, Josh Clark (Granada Hills, Calif./Hillcrest Christian [Riverside City]) knotted the game at 7-7 with an RBI grounder to first base.

Milwaukee reliever Jake Tuttle retired the first Crusader he faced in the eighth before a tidal wave of extra-base hits and walks thrust Valpo ahead for good.

Tuttle left a 2-2 slider up and over the middle of the plate when Kapers struck it far and deep over the left-field wall, just inside the pole. His second round-tripper of the season gave Valpo its first lead at 8-7.

The Crusader offense then went walk, single, walk, double, double to stock their advantage to 12-7. Clark's two-bagger was the final in the sequence and resulted in RBIs No. 48 and 49. It came one batter after Molitor claimed his 53rd run batted in, moving him into a tie with Shawn Lemmons for fifth place for most RBIs in a season.

Yoder logged clean eighth and ninth frames for his second win of the season. He threw a season-high 3 2/3 innings, yielding one hit and striking out three. Dirienzo, who turned in three scoreless frames, also enjoyed his longest appearance of the 2016 season.

Valpo (30-27) advances to the finals of the Horizon League Championship for the fourth time in the last six years. The task doesn't get any easier as Wright State (43-15) awaits the Crusaders. Valpo has to defeat the Raiders in the 12:00 pm ET/11:00 am CT meeting to force a winner-take-all Game 9 at 4:00 pm ET/3:00 pm CT. ESPN3 will have live coverage with live stats also available. Links to both are posted at ValpoAthletics.com.