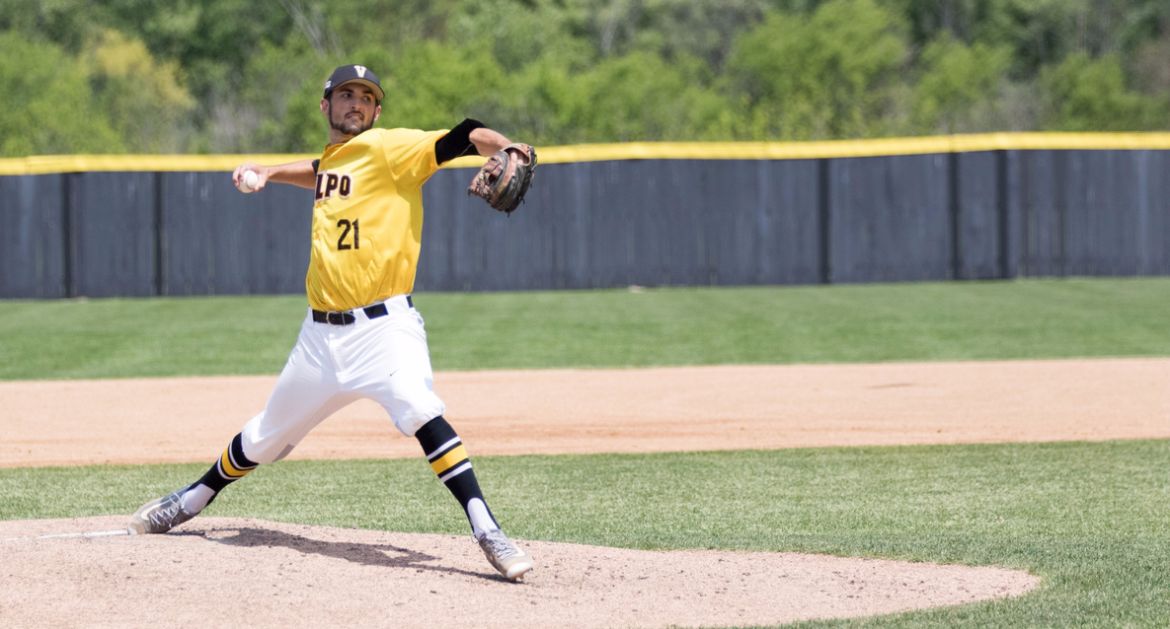 This Week in Crusader Baseball: The Valparaiso University baseball team embarks on its annual spring trip as it heads to Jacksonville, Fla. to meet the Dolphins on Friday evening, the first of eight straight games in the Sunshine State. The Crusaders won’t return to campus until after their first Horizon League series of the year concludes on March 19.

Last Time Out: For the second straight weekend, the Crusaders played a competitive series but dropped two of three as they lost the first two games at UAB before bouncing back with a 9-5 win on Sunday. The Crusaders dropped the opener 5-1 and the middle game 3-2.

On the Air: Live audio and stats courtesy of Jacksonville Athletics will be available for all three games of this weekend’s series. Links can be found on ValpoAthletics.com.

Friday Starters: Senior RHP Mario Losi will take the ball on Friday for the Crusaders. He owns an 0-1 record and 4.91 ERA through two starts this season. He’s issued seven walks – the most of any Valpo pitcher – against three strikeouts in 11 innings. Junior RHP Michael Baumann gets the nod for the Dolphins. He was the A-Sun Pitcher of the Year and A-Sun Freshman of the Year in 2015. Last year he won two starts against Top 25 opponents.

Saturday Starters: Wes Gordon takes the bump on Saturday after going 0-1 with a 3.86 ERA over the first two weekends. The Valpo right-hander has racked up a team-high 12 strikeouts against just one walk in 11 2/3 innings. He’ll oppose sophomore right-hander Chris Gau, a two-way player who also plays infield. He has made two starts and has been spotless so far, scattering eight hits over 12 innings but has not allowed an earned run. Gau has notched victories in both starts and has issued just one walk against 15 strikeouts.

Sunday Starters: Sophomore Grant Inman owns both of Valpo’s wins this season. He has yielded two earned runs in 10 innings, good for a 1.80 ERA. He has issued four walks and struck out six. Inman will face Casey Kulina, a fifth-year senior left-hander who started his collegiate career at Polk State College in 2013 and 2014 before receiving a medical redshirt in 2015 and playing at Jacksonville in 2016. So far this year, Kulina owns a 3.29 ERA in three games, two starts. He’s walked three and struck out a team-high 16 in 13 2/3 innings.

Series Notes: Before this weekend, Valpo and Jacksonville have locked horns on the baseball diamond just twice in the history of the programs, 1982 and 2010. The first meeting occurred on March 10, 1982 at Jacksonville, a game that ended in a 7-7 tie. The Feb. 28, 2010 matchup was also in Jacksonville, as the Crusaders dropped a slugfest 23-14.

Inside the Crusaders: Nate Palace leads the Crusaders in hitting with a .579 average over the first six games. Six of his 11 hits have gone for extra bases. He’s also drawn six walks and been hit by a pitch twice, boosting his on-base percentage to .679. Palace ranks sixth in the nation in hitting and seventh in OBP. He leads the Horizon League in both categories. The Horizon League has the top two players in the nation in slugging percentage, Youngstown State’s Andrew Kendrick at 1.318 and Valpo’s Nate Palace at 1.158. Ellis Foreman’s WHIP of 0.63 ranks in the Top 50 nationally. Freshman Easton Rhodehouse has been strong in two appearances out of the Valpo bullpen, as he has not allowed a run and yielded just one hit while striking out seven and walking one in 5 2/3 innings. As a team, the Crusaders lead the Horizon League in batting average (.282), OBP (.361), hits (58), fewest walks allowed (17) and fielding percentage (.990).

In the Other Dugout: The Dolphins were picked to finish in a tie for fourth in the Atlantic Sun Preseason Coaches’ Poll. They finished third last year with a 14-7 conference mark. They have knocked off Top 25 opponents in four straight seasons. After notching wins over No. 4 Florida State and No. 19 East Carolina last season, the Dolphins upstaged No. 2 Florida in walk-off fashion on Feb. 21 of this year. Catcher Franco Guardascione is 4-for-9 in five games, while outfielder Nathan Koslowski owns a .324 average for Jacksonville to lead the team in hitting among those who qualify. The Dolphins are under the direction of Chris Hayes, who is in his first year in charge after three seasons as an assistant head coach. He was previously on Jacksonville’s staff from 2003-2008 after graduating from Jacksonville in 1995. Hayes spent five seasons (1995-2000) in the minor leagues with the Toronto Blue Jays organization.

Driftless Drivel: Three of Valpo’s four losses this season have come by only one run…  All four of Valpo’s starting infielders are hitting .333 or better through the first six games of the season… James Stea has been hit by a pitch a league-high four times this year… Wes Gordon has struck out seven batters looking, the most of any Horizon League pitcher.