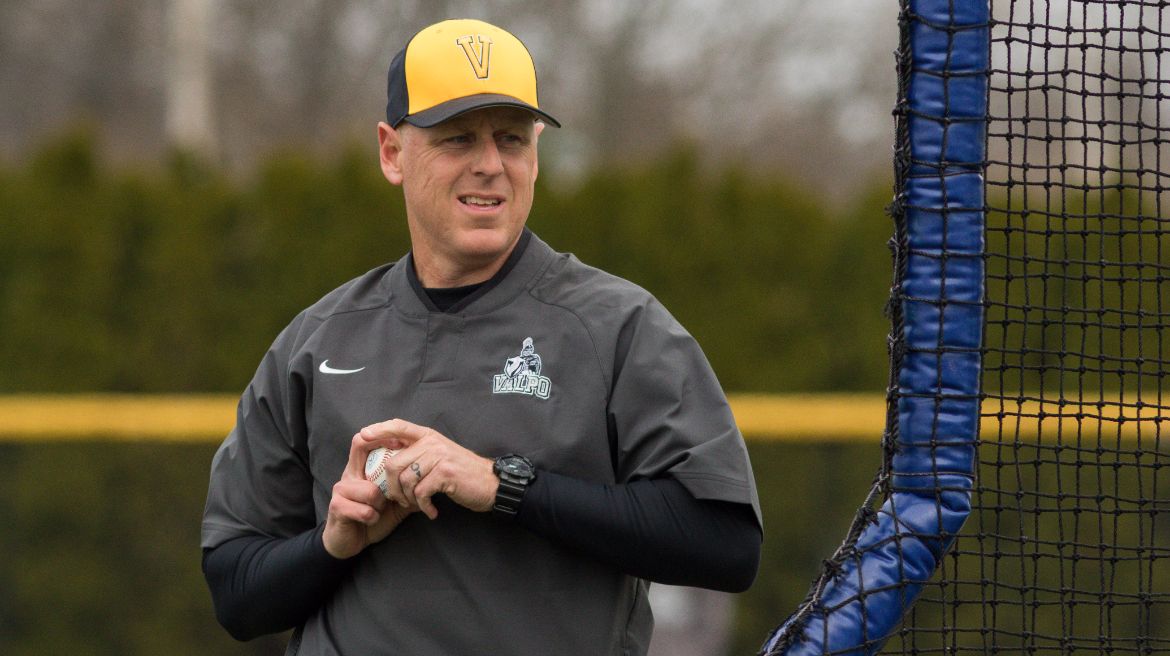 Next Up in Crusader Baseball: After visiting the defending Horizon League champions to open league play at Wright State, another tough test is in store for the Valparaiso University baseball team with this weekend’s series at UIC. The Crusaders and Flames have amended the weekend slate due to the weather forecast and will play a doubleheader on Friday before finishing the series on either Saturday or Sunday.

Last Time Out: Home runs by Nate Palace bookended the scoring in Tuesday’s 13-1 rout of Chicago State. Palace drilled a two-run blow in the first inning, then delivered his second bomb of the day in the ninth, a three-run shot. Michael Mommersteeg worked four innings and yielded just one unearned run on five hits, while Alex Dirienzo and Montana Quigley combined for five scoreless innings of relief. Palace, Jake Hanson, Scott Kapers and Jayden Eggimann chipped in two hits apiece, while Chase Dawson led the way with three hits.

On the Air: All three of this weekend’s games will have a radio broadcast available courtesy of UIC Athletics. Links to live audio and stats will be available on ValpoAthletics.com.

Game 1 Starters: Senior Mario Losi will start the series opener for the sixth consecutive weekend. He holds an 0-2 record and 3.81 ERA in 28 1/3 innings while issuing 13 walks and striking out 14. In his last outing, Losi received no decision despite allowing just one run on five hits over seven strong innings in an eventual 2-1 loss to Wright State. After being outdueled by Horizon League ERA leader Danny Sexton a week ago, Losi will face quality opposition again in Jake Dahlberg, second in the league in ERA at 1.84. Dahlberg has the best opposing batting average in the league at .171. Dahlberg, the 2015 Horizon League Pitcher of the Year, faced the Crusaders once last season, taking the loss after allowing two runs on three hits in six innings on April 22. He pitched three times against Valpo in 2015, going 3-0 with a 2.22 ERA in those starts. Losi is no stranger to facing UIC. He made two starts against them a year ago and went 1-1 with a 2.03 ERA in 13 1/3 innings while issuing seven walks and striking out 13.

Game 2 Starters: Wes Gordon will encounter the Flames for the first time as the junior college transfer continues his first trip around the Horizon League. Gordon is searching for his first victory as he stands at 0-3 with a 5.62 ERA. He has racked up a team-high 17 strikeouts while walking just five in 24 innings. He faces sophomore Reid Birlingmair, who has come into his own this year after going 1-3 with an 8.81 ERA in 17 games a year ago. The UIC righty is 2-0 with a 2.84 ERA and has issued eight walks while striking out 31 in 31 2/3 innings. He’s appeared in five games, all starts.

Game 3 Starters: The Crusaders have not yet named a starting pitcher for Game 3. UIC will go with Jack Andersen, who is 0-1 with a 5.23 ERA in four games, all starts. Andersen has issued eight walks and fanned 20 in 20 2/3 innings. The Crusaders did not face Andersen last season and saw him for 1 2/3 innings of scoreless relief in 2015. Andersen shut down Youngstown State in his most recent outing to the tune of no runs on three hits and one walk in 6 1/3 innings.

Series Notes: The Crusaders and Flames have been going at it on the baseball diamond since 1977, with UIC holding a 72-59 edge in the all-time series. The most recent showdown took place in last year’s Horizon League Tournament, as Valpo pulled out a 4-2 win over the Flames. Ellis Foreman pitched the Crusaders to victory by limiting UIC to two runs on five hits in seven innings before Ryan Fritze came on for the save with two flawless frames. That loss ended UIC’s season. The Flames had won three of the five regular-season matchups. The Crusaders have not won a series against the Flames since 2012. They’ve dropped five three-game sets and split a two-game series since their last series triumph.

Inside the Crusaders: Valpo’s Nate Palace regained the league lead in slugging percentage with his two-homer performance on Tuesday. He now sits at .662. Palace leads the team in average (.324), RBIs (15) and home runs (5). James Stea is atop the league in both stolen bases (11) and hit by pitch (8). The Crusaders are batting .253, fourth in the league, and rank third in the league in ERA at 3.61. Valpo finds itself in an unfamiliar position, as it enters its fourth league game seeking its first conference victory for the first time since 1990. After Friday, the Crusaders will have faced the top four pitchers in the league in ERA in their first four Horizon League games.

In the Other Dugout: UIC extended its winning streak to seven games by besting Big 10 foe Northwestern for the second time this season on Tuesday, dispatching the Wildcats 7-1. The Flames have won seven in a row for the first time since putting together an eight-game winning streak from May 5-21, 2015. The Flames have scored an average of six runs per game during their winning streak. Their pitching staff owns a 1.12 ERA over those seven games with opponents hitting .183 against them. UIC swept a weekend series from Youngstown State that culminated with a 1-0, 12-inning victory in the nightcap of a doubleheader on Sunday. UIC has won its first three Horizon League games for the first time since 2011. The Flames are 4-0 at home. UIC leads the league in ERA at 2.97. Opponents are hitting .221 against Flame pitching. In addition, they rank second in the league in batting average at .264. UIC is led offensively by David Cronin, who ranks second in the league in hitting at .373.

Driftless Drivel: With his second home run on Tuesday at Chicago State, Nate Palace surpassed the 100-RBI plateau for his collegiate career. He became the first Crusader since Chris Manning (2011-14) to reach 100 career RBIs. Palace enters the weekend 12 RBIs away from cracking the Top 10 in program history in career RBIs… Palace’s two-homer game was his first since Feb. 28, 2016 and the third of his career. His five RBIs were his highest total since driving in seven in 2015… The Crusaders scored six times in the top of the ninth on Tuesday at Chicago State, their most prosperous inning since plating eight in the fourth inning of a 15-7 win at Youngstown State on May 13, 2016… The Crusaders are outscoring opponents 23-4 in the ninth inning or later this season… Valpo is 0-7 when opponents score first and 7-4 when scoring the first run.