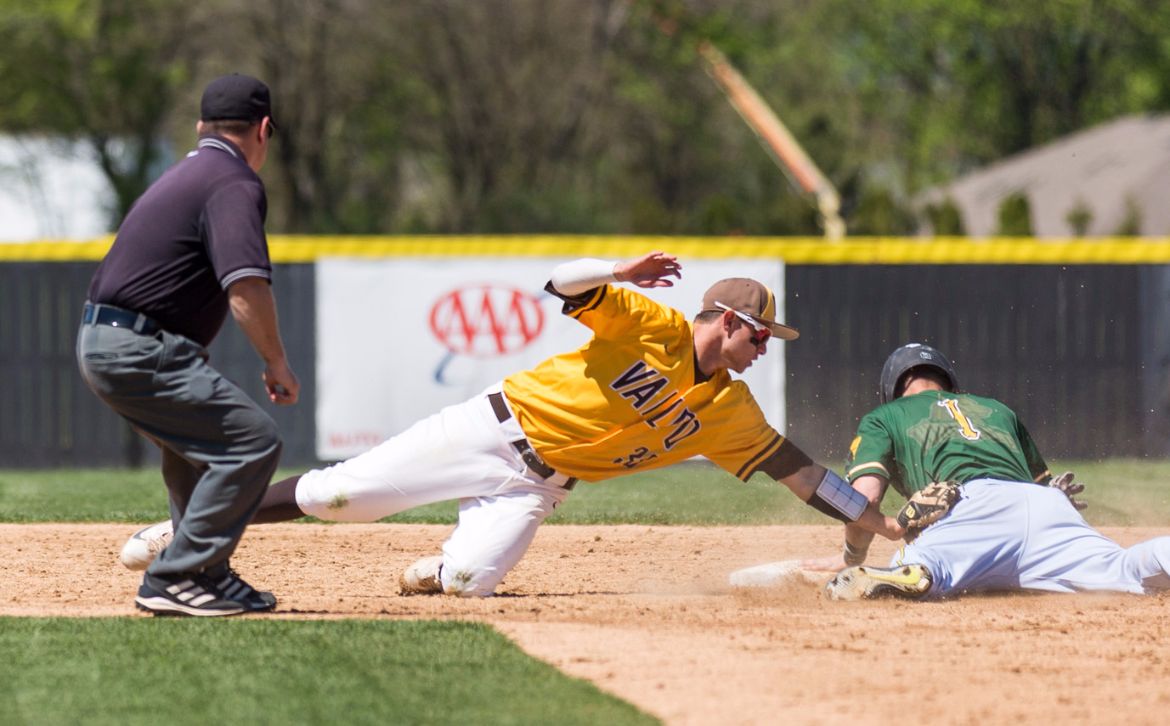 Next Up in Crusader Baseball: The Valparaiso University baseball team will make the longest Horizon League journey this weekend as it heads to Youngstown State for a three-game set with the Penguins. Note that the series schedule has been altered due to weather, as the two teams are now scheduled to play a doubleheader on Friday beginning at 1 p.m. CT. All five of the meetings between the Crusaders and Penguins will occur in an eight-day span, as Valpo and Youngstown State get together next Friday, May 5 for a doubleheader at Emory G. Bauer Field.

Last Time Out: After splitting a doubleheader with Wright State on Sunday and going 2-2 in league play last weekend, the Crusaders suffered a 10-3 setback at Notre Dame on Wednesday night. Giovanni Garbella doubled twice to provide a bright spot for the Crusaders, who also got strong bullpen work from Hayden Kissee, Chet Joslyn and Easton Rhodehouse.

Saturday Starters: Ellis Foreman has earned another start after he made the most of his first start of the season last week. The fifth-year senior righty earned the Horizon League Pitcher of the Week award after throwing a complete game shutout against Wright State on Sunday. He scattered seven hits and matched a career high with 11 strikeouts while issuing no walks. Youngstown State has not yet named its Game 3 starter.

Series Notes: The Crusaders have dominated the all-time series, which dates back to 1992. Valpo is 55-18 against Youngstown State. The Crusaders won four of the five meetings last year – sweeping a three-game series at Emory G. Bauer Field after splitting a twin bill in Youngstown.

Inside the Crusaders:  Valpo holds a 5.22 ERA (fourth Horizon) and a .271 batting average (third). The Crusaders are led by Chad Jacob, who is hitting .358. Freshman Christian Barczi leads the team in league-only batting average at .373. Nate Palace has 111 career RBIs, putting him on the verge of cracking Valpo’s career Top 10. Kurt Gessee (1982-86) currently ranks 10th at 113. Palace is the team leader in home runs with seven and RBIs with 25 despite missing four games and six starts due to illness. Sam Shaikin has reached safely in 23 straight games. James Stea ranks second in the league in stolen bases with 18, which is tied for 20th nationally. Stea has been hit by a pitch 20 times, which is tied for second nationally. Giovanni Garbella has had quite the last two weeks – ripping two home runs in a game against Chicago State, racking up six RBIs against Northern Kentucky and banging two doubles against Notre Dame. Jake Hanson hit .238 in the first 19 games of the season, and is now hitting .371 in 17 games since. Sam Shaikin started the season with a .238 average with four RBIs in his first 18 games, but has since heated up to .395 with 17 RBIs in his last 21 games.

In the Other Dugout: The Penguins are coming off a 4-2 midweek win over Canisius. They split a doubleheader with Milwaukee on Sunday, dropping the first game 5-2 before notching a 5-1 victory in the nightcap. Youngstown State is under the direction of first-year head coach Dan Bertolini, who spent the last eight years at Mercyhurst North East. The Penguins are led in batting average by Nico Padovan, who is hitting .289. Andrew Kendrick has cracked 14 home runs and racked up 33 RBIs, leading the league in home runs and ranking eighth in RBIs. The Penguins rank last in the league in batting average at .248, on-base percentage at .318 and team ERA at 7.10.