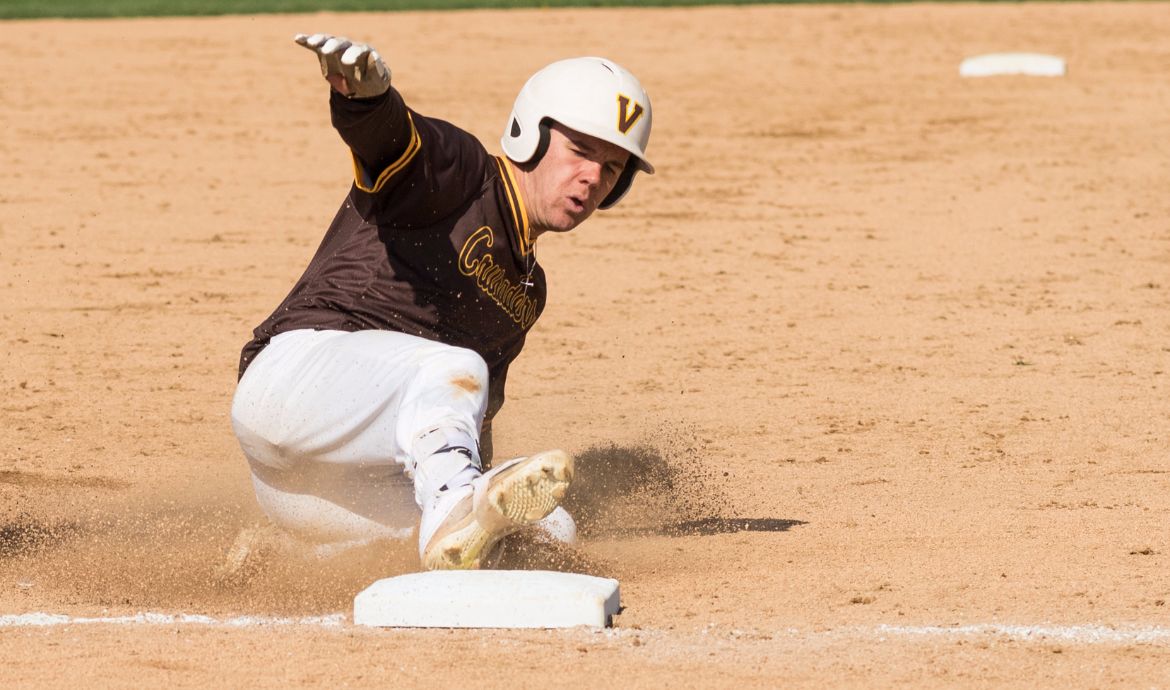 Next Up in Crusader Baseball: The Valparaiso University baseball team will embark upon the final seven-game stretch of the regular season with four games in two days this weekend. The Crusaders finally play Milwaukee for the first time all season with a Saturday doubleheader at Henry Aaron Field, then come home for a double dip with UIC on Sunday. Five teams can finish anywhere from third to seventh in the Horizon League, with everyone fighting to avoid being the one team left out of the league tournament.

Last Time Out: Sunday’s doubleheader marked a tale of two games for the Crusaders, as Valpo posted 18 hits in the opener on their way to a 13-3 victory, but then could only muster up one hit in a 7-0 loss in the second game. Valpo managed to match its season high for hits in a game and establish the season low for hits in a game on the same day. The Crusaders received a strong pitching performance from Grant Inman in the opener, as he allowed two runs (one earned) on five hits and three walks in 5 1/3 innings. Valpo was scheduled to host Purdue in a midweek game on Tuesday, but it was cancelled due to rain.

On the Air: Live stats of all four games will be available on ValpoAthletics.com. Sunday’s twinbill is scheduled to have live audio courtesy of WVUR, 95.1 FM Valparaiso, with Ben Ariano, David Horak and Ethan Leach describing the action.

Saturday Game 1 Starters: Mario Losi (1-4, 5.86 ERA) will make his 13th start of the season. Both of his remaining regular season starts will come against the Panthers. Losi hasn’t faced Milwaukee since May 2, 2015, when he took the loss after allowing four earned runs on five hits and four walks in four innings. Austin Schulfer is 6-4 with a 3.20 ERA in 12 games on the year. He too will make his 13th start of the season on the 13th day of May. The junior right-hander hails from Plover, Wis. He has made three career relief appearances against the Crusaders, but has not started against them.

Saturday Game 2 Starters: Jon Tieman will look to keep it rolling after allowing just two runs (one earned) on four hits while striking out 11 in seven innings of a 6-2 win over Youngstown State last week. Tieman struck out 11, matching the individual single-game high by any Crusader this season. For the year, he stands at 2-1 with a 2.83 ERA in 35 innings over 18 appearances, three starts. He’ll face off with lefty Alex Fischer, a sophomore from Sussex, Wis. Fischer, who has never faced Valpo, holds a 6.12 ERA and 1-3 record in 21 games, 19 of which have come in relief.

Sunday Game 1 Starters: Grant Inman grabbed the win in a 13-3 whitewash of Oakland in Game 1 of last week’s double dip. He heaved 5 1/3 innings and permitted just two runs, one earned, on five hits. Inman (4-5, 6.06 ERA) has only pitched one inning against the Flames in his career, a shutout frame of relief earlier this season. He’ll be opposed by Jack Andersen, who owns a 3.62 ERA and 3-2 record in 10 games, all starts. Andersen started against the Crusaders on March 26 and got the win, allowing one run on six hits in six innings.

Sunday Game 2 Starters: The second game will see the Crusaders send Ellis Foreman to the mound for his fourth start. He is 2-2 with a 3.98 ERA and has worked 43 innings. Foreman was on the losing end of a 7-0 defeat to the Grizzlies last weekend, but only two of the seven runs he allowed over 5 1/3 innings were earned. The Flames are expected to trot out Jacob Key, who has a flawless 6-0 record and 1.98 ERA in 11 games, nine starts. Key is third in the league in ERA behind only Wright State’s Ryan Weiss and UIC’s Jake Dahlberg. The freshman from Murfreesboro, Tenn. has been a pleasant addition for the Flames.

Series Notes – Milwaukee: The Crusaders and Panthers will face off for the first time since a memorable Horizon League Tournament semifinal last season that saw the Crusaders erase an early 6-0 hole and pull out a 12-7 victory. The Crusaders are 29-39 all-time against Milwaukee in a matchup that dates back to 1990. Valpo won four of the six meetings last season.

Series Notes – UIC: The Crusaders dropped two of three when they visited Curtis Granderson Stadium. The two teams have been facing off on the baseball diamond since 1977. UIC holds a 74-60 edge in the all-time series. Valpo defeated UIC 4-2 in last year’s Horizon League Tournament to end the Flames’ season.

Inside the Crusaders: Valpo enters the final seven games of the Horizon League slate in a tight race for positioning in the Horizon League Tournament. There are two primary races in the Horizon League – one for the right to host the league tournament, and the other to avoid being the team left out of the tournament field. The first of those aforementioned races involves UIC and Wright State, who enter the final stretch tied for first at 18-5. Valpo is a part of the other group, as the remaining five teams could finish in any order. Entering Friday, Valpo is currently in a three-way tie for fourth with Milwaukee and Oakland at 9-14, only one game behind third-place Northern Kentucky, but only 1 ½ games in front of seventh-place Oakland. Six of the seven teams in the Horizon League will make the tournament… The Crusaders are coming off a lightning-fast loss to Oakland that lasted only 1 hour, 56 minutes – the fastest Valpo game since May 10, 2013. Valpo committed a season-high five errors and mustered up a season-low one hit in the 7-0 defeat… All nine players in Valpo’s starting lineup had at least one hit in the 13-3 victory over Oakland in Game 1. Seven Crusaders had multi-hit games…. James Stea stole his 21st base of the season last Friday, moving into a five-way tie for fifth in program history. Entering this weekend, he needs two steals to match Kyle Gaedele (2011) for fourth. Mike Healey (1985) holds Valpo’s single-season stolen base record with 37. In addition, Stea has already tied the program record by being hit by a pitch 22 times this year. With his next HBP, he’ll pull past Tanner Vavra (2012) and take over sole ownership of the single-season hit by pitch record. Stea still ranks second in the nation with 22 HBP and sits tied for 17th nationally with 20 steals. Nate Palace is currently 10th in program history in career RBIs with 114. He needs two to move into a tie for ninth. Palace is also tied for fifth in program history with 22 career home runs. He’s the first Valpo player since Jeff Mandsager (2001-2003) to finish with 22 or more career long balls. Palace scored the 100th run of his collegiate career on Friday. Despite only playing at Valpo two seasons as a JUCO transfer, Stea ranks eighth in program history in career stolen bases with 38.

In the Milwaukee Dugout: While Valpo will be fresh for Saturday’s doubleheader, the Panthers will be coming off a home twinbill with Wright State on Friday. Milwaukee has won six of its last seven Horizon League games entering this weekend. After a slow start to league play, the Panthers are playing their best baseball of the year and have worked their way out of the Horizon League basement, which is occupied by Youngstown State for at least the time being. Saturday will serve as Senior Day, with the Milwaukee seniors receiving recognition between games. Daulton Varsho enters the weekend five hits away from 200 for his career, on the verge of becoming the first junior in program history to reach that milestone. Varsho leads the league in batting average (.386), slugging percentage (.676), on-base percentage (.502), runs scored (44), hits (68) and walks (37). He’s tied for the league lead in total bases (119) and triples (5) while ranking sixth in home runs (10). Scott Doffek is in his 11th season as the head coach at Milwaukee. Panthers senior Jeremy Wright is a Munster native and graduated from Andrean High School, also the alma mater of Chase Dawson. The Panthers are coming off a 17-1 rout of Chicago State on Tuesday. Milwaukee’s team batting average ranks third in the league at .273, but they have a league-low 26 home runs.

In the UIC Dugout: The Flames enter the weekend duking it out with Wright State for the top spot in the league. They stumbled slightly last week, splitting doubleheaders with both Oakland and Milwaukee. The Flames are under the direction of veteran head coach Mike Dee, whose team leads the league in batting average at .292 and ERA at 2.62. Rob Calabrese leads the Flames in hitting at .373 and RBIs at 43, while Ricardo Ramirez is the team leader in home runs with nine. The Flames will also face the Raiders before the Crusaders this weekend, as they battle Wright State for an important doubleheader at Curtis Granderson Stadium on Saturday. The Flames and Raiders face off for a three-game weekend series to close the regular season starting on Thursday that could dictate the regular season title and location of the league tournament.