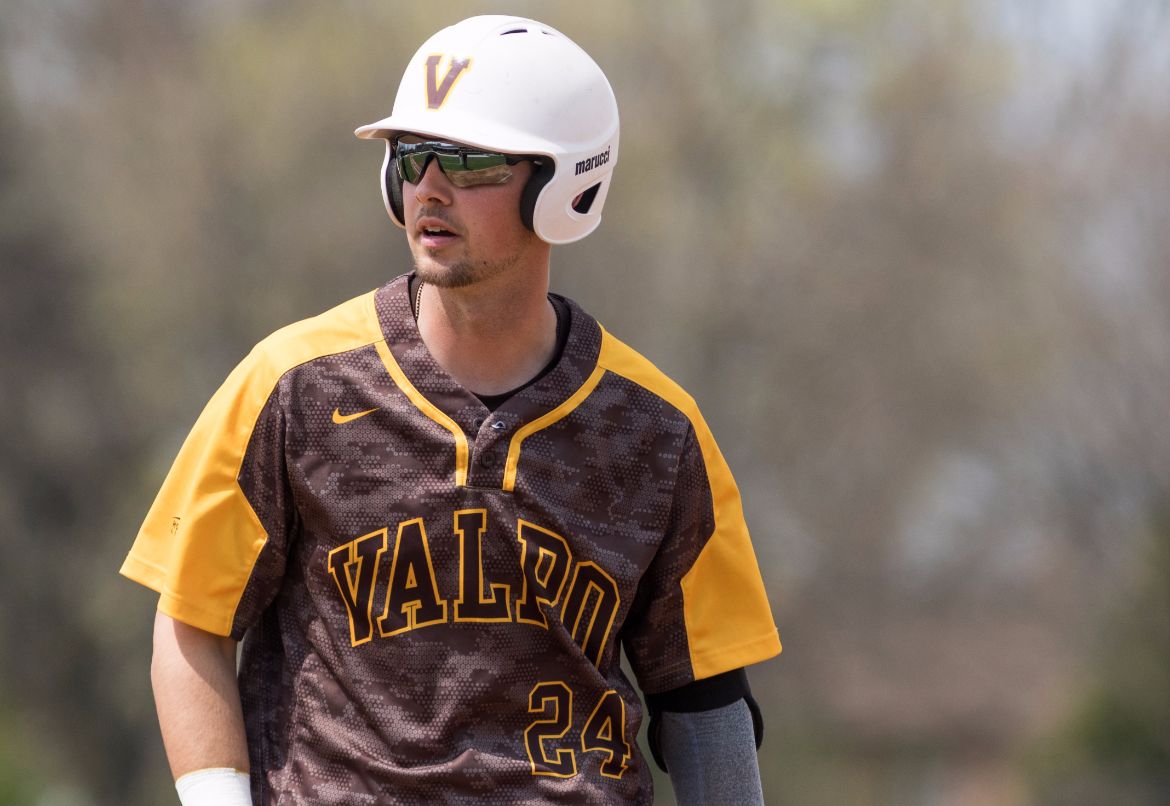 Next Up in Crusader Baseball: The Valparaiso University baseball team will close out the regular season with a three-game series at Emory G. Bauer Field beginning on Thursday afternoon as Milwaukee comes to town. Saturday’s game will mark the final Valpo home athletic event of the 2016-2017 academic and athletic year. It’s also Senior Day for the Crusaders as they recognize James Stea, Nate Palace, Mario Losi, Ellis Foreman and Jake Hanson prior to the game.

Last Time Out: The Crusaders went 3-1 last weekend, sweeping a doubleheader over Milwaukee with 11-3 and 7-4 wins on Saturday before earning a split against first-place UIC on Sunday with a 7-6 Game 2 win following a 2-0 defeat in the opener. The Valpo bullpen was the most impressive aspect of the weekend, as Crusader relief corps hurled 12 2/3 scoreless innings. The winning weekend allowed the Crusaders to cement their place in the upcoming Horizon League Tournament as they can finish no worse than sixth in the regular season standings. Valpo will finish somewhere between third and sixth depending on the outcomes of this weekend’s games across the league.

On the Air: The three-game set will air on 95.1 FM Valparaiso, WVUR. Jake Wulbert and Ethan Leach will describe Thursday’s game, David Horak and Jordan Morandini will have the Friday call and Payton Ball will call the action for the series finale. Links to live audio and stats will be available on ValpoAthletics.com.

Thursday Starters: Senior Mario Losi (2-4, 5.67) will make the final Emory G. Bauer Field start of his career in the series opener. This marks his second straight start against Milwaukee after he beat the Panthers by scattering nine hits and two walks while yielding three runs in 7 1/3 innings on Saturday. Losi, who will be working on four days of rest, will face off with Milwaukee ace Jay Peters, a senior who came to the Panthers as a JUCO transfer a year ago. Peters boosted his record to 8-1 with his fourth consecutive complete game in a 4-3 win over Wright State last week. He yielded three runs (one earned) on six hits while racking up nine strikeouts and issuing two walks. The Crusaders saw Peters twice last season – he took a loss in relief, then started and received no decision. Peters ranks second in the Horizon in league-only ERA at 1.95 behind only UIC’s Jack Andersen at 1.94. Opponents are hitting just .210 against Peters in league play.

Friday Starters: Jake Larson (1-1, 5.74) will make his first career Horizon League start on Saturday. The freshman right-hander has not allowed a run in either of his last two outings, as he has hurled 10 2/3 scoreless innings. His only start of the season came on April 11 at Ball State, when he yielded four runs on four hits in 2/3 of an inning. Larson was high school teammates with Valpo shortstop Chad Jacob at Woodbridge High School in California. Larson will go up against Austin Schulfer, who was charged with seven runs (six earned) on seven hits in 3 2/3 innings when he faced Valpo last weekend. Schulfer is 6-4 with a 3.20 ERA in 12 appearances this year, all starts.

Saturday Starters: Fifth-year senior Ellis Foreman will toe the rubber on Senior Day. Foreman (2-2, 3.98 ERA) has made 19 appearances and three starts this season. His most recent outing came on Sunday against UIC when he left after allowing six runs (four earned) on seven hits in 3 1/3 innings. Foreman’s first start of the year was a complete-game shutout that featured 11 strikeouts on April 23 against Wright State. The Panthers have not yet tabbed their Saturday starter.

Senior Stats: Several of the Valpo players who will be honored prior to Saturday’s game will leave with their name etched somewhere in the Valpo record book. Nate Palace enters the weekend with 116 career RBIs, which is tied for ninth in program history. He needs one more RBI to move into sole possession of ninth, five to move into a tie for eighth and 10 to move into a tie for seventh. Palace is also in the all-time Top 10 in doubles with 42 for his career, which ranks sixth in Valpo history. His 22 career home runs are the most by any Crusader in the last 14 years. He is in a four-way tie for fifth in program history in career long balls, needing one more to advance into a tie for fourth with Joe Gersna (1982-85). Palace is also one of three players in program history to reach 1,000 career putouts. James Stea only spent two seasons in a Valpo uniform, but that didn’t stop him from cracking the career Top 10 in stolen bases. He enters the weekend with 39 career steals, eighth in program history and four away from pulling into a tie for sixth. Stea’s single-season total of 21 steals places him in a five-way tie for fifth in program history. He needs one more to claim sole possession of fifth place and two more to move into a tie with Kyle Gaedele (2011) for fourth all-time. Stea has matched Tanner Vavra’s program record with 22 hit by pitches this season and needs one more for sole possession of Valpo’s all-time mark. Losi has proved to be a reliable arm over his four seasons at Valpo, totaling 279 1/3 innings, which is eighth in program history. If he goes at least 2 1/3 on Thursday, he’ll move into seventh and could climb as high as sixth with Thursday’s start.

Series Notes: The Crusaders and Panthers played one another in a memorable Horizon League Tournament semifinal last season that saw the Crusaders erase an early 6-0 hole and pull out a 12-7 victory. The Crusaders are 31-39 all-time against Milwaukee in a matchup that dates back to 1990. Valpo swept both games of a doubleheader against the Panthers last weekend and needs only one victory this weekend to secure the season series.

Rhodehouse Rewarded: Freshman reliever Easton Rhodehouse was honored as the Horizon League Pitcher of the Week on Monday after he picked up a save against Milwaukee and a win against UIC this past weekend. Rhodehouse entered Sunday’s second game against UIC in a 6-6 deadlock in the sixth inning and retired all 12 batters he faced, seven of them via the strikeout against the top team in the league. The four-inning outing was the longest of his career. He also nailed down his third save of the season in a 7-4 win over Milwaukee on Saturday. Rhodehouse became the first Valpo relief pitcher to win the weekly award since Karch Kowalczyk on May 6, 2013 and is the first Crusader true freshman to be named Horizon League Pitcher of the Week since Bryce Shafer on March 4, 2008.

Inside the Crusaders: Scott Kapers enjoyed the most productive offensive weekend of any Crusader, going 6-for-14 (.429) with three doubles in the four games. Chase Dawson went 5-for-12 (.417), while James Stea launched two home runs, had four extra-base hits and drove in seven over the four games. In addition, freshman Blake Lutgen started at DH and notched his first collegiate hit in Sunday’s second game against the Flames. Kapers is hitting .333 over the last 10 games (10-for-30), joining Giovanni Garbella (.351), Dawson (.333) and Stea (.325) as players hitting above .300 during that stretch. Dawson is hitting a team-best .366 over the last 15 games after hitting .226 over his first 31. Kapers, a catcher by trade, played all four games at third base last weekend, allowing Sam Shaikin to slide over to shortstop in place of the injured Chad Jacob.

Inside the Panthers: Milwaukee is attempting to bounce back after dropping both games of a doubleheader to the Crusaders last week. Before last weekend’s three-game skid, Milwaukee had won seven of its previous eight league games. The Panthers locked up a spot in the league tournament when Youngstown State lost both games of a doubleheader on Sunday. Milwaukee is under the direction of Scott Doffek, in his 11th season at the helm. For the Panthers, it all starts with Daulton Varsho, who leads the league in hits, runs, slugging percentage, on-base percentage, triples and walks and ranks second in batting average. Varsho was ranked No. 98 in Baseball America’s 2017 College Top 100 Draft Prospects and is expected to be an early selection in this year’s MLB Draft.

Inside the Standings: UIC and Wright State play each other in Dayton in a three-game series this week beginning on Thursday. The Flames only have to win one game in the series to secure the regular season title and the right to host the league tournament, while Wright State must sweep to do so. Youngstown State is locked into seventh and will miss the league tournament. If Valpo wins at least one game against Milwaukee this weekend, the Crusaders will finish no worse than fifth. The Crusaders enter the final weekend two games behind Northern Kentucky for the No. 3 seed. If Valpo sweeps Milwaukee and Northern Kentucky drops at least two of three to Oakland, Valpo would move up to the No. 3 seed. The Crusaders are currently one game ahead of Oakland for fourth, so they must also win at least the same number of games as Oakland this weekend to assure they will not be passed by the Grizzlies.