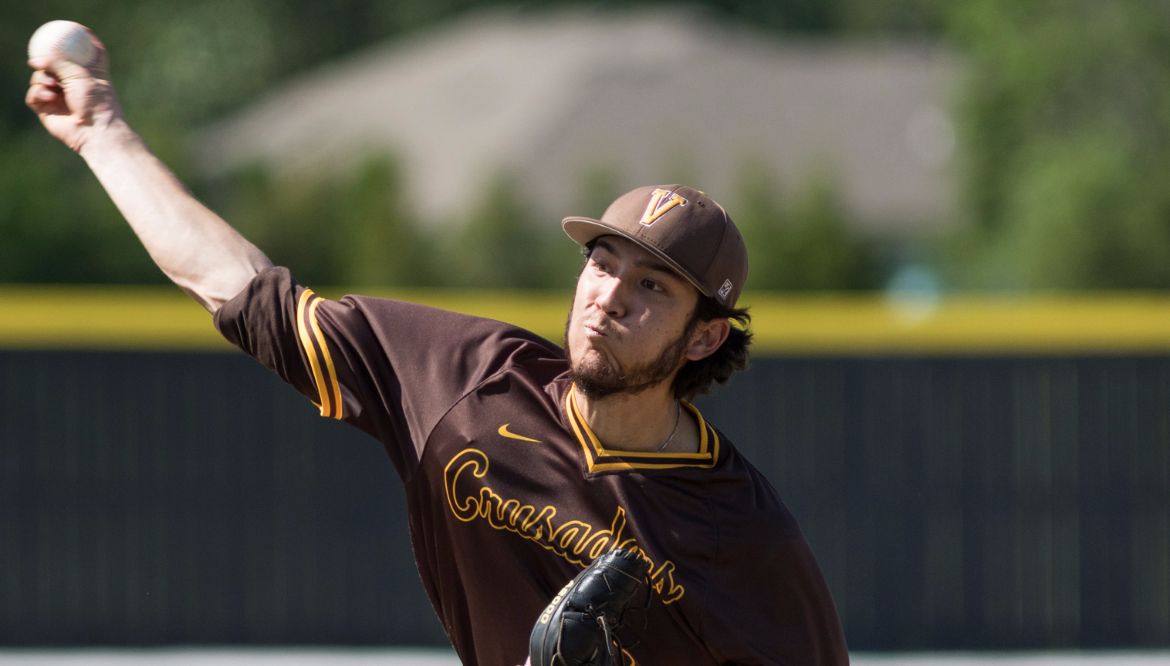 Next Up in Crusader Baseball: The Valparaiso University baseball team enters the most important week of the season playing well at the right time. The Crusaders won four of their final five regular season games to latch down the No. 4 seed in this week’s Horizon League Tournament, which will be hosted by UIC at Curtis Granderson Stadium in Chicago. Valpo’s first task is to survive a single-elimination first-round game against Oakland, then the Crusaders would face either No. 2 Wright State or No. 1 UIC on Thursday to begin the four-team, double-elimination portion of the tournament.

Last Time Out: The Crusaders were scheduled to play a three-game series against Milwaukee last weekend, but heavy rain on Friday and Saturday limited the series to one game. The Crusaders won that contest 5-4 on Thursday thanks to a bases-loaded walk by Christian Barczi in the bottom of the ninth. The Panthers had clawed back with a run to tie it in the top of the frame, but the Crusaders drew four ninth-inning walks – two of which were intentional – to walk away with the win. Freshman Jon Tieman picked up the win in relief and finishes the regular season with four wins and seven saves in his rookie campaign.

On the Air: Every game of the tournament will be broadcast on ESPN3. Links to live video and stats of all games this week will be available on ValpoAthletics.com. In addition, follow @ValpoBaseball for live tweets during the games.

Series Notes – Oakland: The Grizzlies took three of the five regular season meetings, all of which were held at Emory G. Bauer Field. This was the first time Oakland won the regular season series against Valpo since the Grizzlies joined the league for the 2014 season. Valpo leads the all-time series 33-21. The two teams have met in the Horizon League Tournament once previously, a 2-0 Valpo win on May 22, 2014 in Mequon, Wis.

Series Notes – The Remainder of the Field: The Crusaders went 1-4 against Wright State and dropped three of five to UIC. However, they swept all three regular-season meetings with Milwaukee and took three of five from third-seeded Northern Kentucky.

Wednesday Starters: Senior Mario Losi (2-4, 5.28 ERA) will get the ball for Wednesday’s “win or go home” game against the Grizzlies. Losi has made 14 starts as Valpo’s No. 1 starter, compiling 87 innings and issuing 27 walks while striking out 44. His most recent outing was a strong one on May 18 as he fired six shutout innings and allowed only four hits, receiving no decision in an eventual 5-4 win over Milwaukee. The senior righty has logged 285 1/3 career innings, which puts him in seventh in program history. He will jump to sixth if he makes it through the first inning on Wednesday and fifth if he goes 6 2/3. Losi has dropped both league tournament starts in his career, so he’ll seek his first career Horizon League Tournament victory on Wednesday. Losi faced the Golden Grizzlies once during the regular season. He hurled 7 2/3 innings and permitted six earned runs on five hits and two walks, receiving no decision in an eventual 7-6 win on April 13. The Grizzlies will send Jake Lee to the bump for the tournament opener, his third start against the Crusaders this season. He allowed eight runs (three earned) on 11 hits in 4 2/3 innings in a 19-9 Oakland win over Valpo on April 15. He took the loss, allowing three runs (two earned) on seven hits in four innings in a 13-3 Valpo win on May 7.

Inside the Crusader Offense: James Stea shattered the program record for hit by pitches in a single year with 23 and is tied for third nationally. Stea is tied for 35th in the nation with 21 stolen bases. Stea has only spent two seasons in a Valpo uniform, but that didn’t stop him from cracking the career Top 10 in stolen bases. He enters the tournament with 39 career steals, eighth in program history and four away from pulling into a tie for sixth. Stea’s single-season total of 21 steals places him in a five-way tie for fifth in program history. He needs one more to claim sole possession of fifth place and two more to move into a tie with Kyle Gaedele (2011) for fourth all-time. Stea also has power, as he’s eighth in the league in home runs in league-only games with six… Nate Palace enters the tournament with 116 career RBIs, which is tied for ninth in program history. He needs one more RBI to move into sole possession of ninth, five to move into a tie for eighth and 10 to move into a tie for seventh. Palace is also in the all-time Top 10 in doubles with 42 for his career, which ranks sixth in Valpo history. His 22 career home runs are the most by any Crusader in the last 14 years. He is in a four-way tie for fifth in program history in career long balls, needing one more to advance into a tie for fourth with Joe Gersna (1982-85). Palace is also one of three players in program history to reach 1,000 career putouts… Fifth-year senior Jake Hanson has established season career highs in most offensive categories. He has nearly doubled his career RBI total with 30 this season and did double his career totals in walks (13 in 2017, 13 previously), hits (59 in 2017, 55 previously) and doubles (14 in 2017, seven previously)… Sophomore Sam Shaikin has been a consistent force in the lineup throughout the season. He leads the team with 19 multi-hit games and is the only player on the team who finished the regular season with a batting average above .300 at .315. Shaikin was also the only Crusader to play in all 52 regular season games this year… Freshman Christian Barczi had a .343 average in league play, the highest on the team… Junior Giovanni Garbella ranks 10th in the Horizon in league-only batting average at .330. Garbella has 10 doubles in league play, tied for fourth in the Horizon….Sophomore Scott Kapers is 9-for-18 over his last five games with five runs scored, three doubles, a triple and five RBIs. He has 14 total bases during that stretch, matching Stea for a team lead. Kapers holds a team-best .778 slugging percentage over the last five games. In the last 15 games, Kapers is hitting a team-best .375 with 14 RBIs after entering that stretch with a .228 average… Sophomore second baseman Chase Dawson is another player who has heated up offensively. He’s hitting .357 over the last 16 games after hitting .226 over his first 31.

On the Mound: Jon Tieman ranks sixth in the league in league-only ERA at 2.80. Tieman’s 51 total strikeouts rank ninth in the league. Despite being moved into the starting rotation midway through the season, Tieman is third in the league with seven saves. Easton Rhodehouse is one of five pitchers in the league with three or more saves in league play. Rhodehouse picked up the win in his most recent outing, four perfect innings out of the bullpen against UIC on May 14 to earn Horizon League Pitcher of the Week accolades. Ellis Foreman has allowed the fewest walks of any pitcher in the Horizon League who has worked enough innings to qualify, as he’s yielded just five free passes in league play. Jake Larson has strung together 10 2/3 scoreless innings over his last two outings out of the Valpo ‘pen… Chet Joslyn gave up three runs on May 18 against Milwaukee, but hadn’t allowed a run in any of his previous three outings… Alex Dirienzo has not been charged with a run in any of his last four appearances.

Driftless Drivel: As a team, the Crusader rank 15th in the nation with 79 hit by pitch… Valpo is tied for 44th nationally with 41 sacrifice bunts this season, first in the league… As a team, the Crusaders have a .376 on-base percentage in league play, second to only UIC. Valpo leads the league with 61 doubles in Horizon League games… The Crusaders are 0-13 this season when they score two runs or fewer, but 24-15 when scoring three runs or more… Valpo is 0-11 when allowing eight runs or more and 24-17 when limiting opponents to seven runs or fewer… The Crusaders have allowed the opposing team to score in the first inning 16 times this season and have gone on to lose 15 of those games… The Crusaders have outscored opponents 48-24 in the ninth inning this season, but have been outscored 42-22 in the eighth... The last time any Valpo player had been intentionally walked before the two IBBs in the ninth inning on Thursday was Feb. 26 at UAB.

Head Coach Brian Schmack: Brian Schmack, the 17th head coach in Valparaiso University history, is in his fourth season at the helm of the Crusaders. He led Valparaiso to 25 wins in his inaugural campaign, a school record for victories by a first-year skipper. The former big leaguer followed that up with a 22-win season in 2015, then guided the team to its first winning record since 2013 a year ago. This season, he earned his 100th career win on May 14, a 7-6 victory over first-place UIC, becoming just the fifth coach in program history to reach the century milestone. Schmack, a member of the 2003 Detroit Tigers, served as pitching coach/associate head coach at Valpo for seven seasons prior to his promotion.