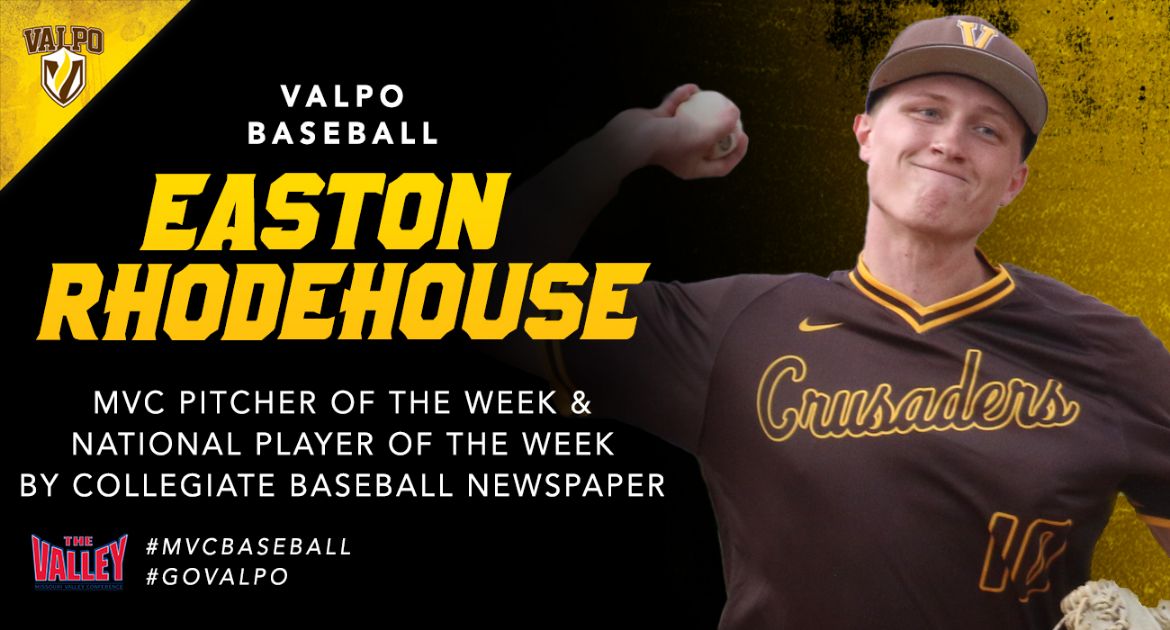 Valparaiso University baseball pitcher Easton Rhodehouse (Gilbert, Ariz. / Highland) earned a pair of honors on Monday as he was named the Missouri Valley Conference Pitcher of the Week while also being recognized by Collegiate Baseball Newspaper as one of six National Players of the Week.

Rhodehouse, a junior right-hander, logged seven scoreless innings over two games during the week, racking up 10 strikeouts while issuing just two walks with opponents batting .050 against him. He was the hero of his team’s 4-3, 14-inning victory over Southern Illinois on Friday night as he entered the game in the ninth inning and pitched six scoreless frames of no-hit baseball. Rhodehouse received a well-earned win after racking up a career-high eight strikeouts on a night where he also established career watermarks in innings pitched and pitch count.

That showing came after he worked a scoreless frame on Wednesday in a road game against Big Ten foe Michigan State. Rhodehouse has his ERA at 3.00 over 33 innings this season after finishing his sophomore year at 9.68. He had the seventh-best outing in the nation on Friday night according to D1Baseball.com's "game score" with a 78, a particularly impressive feat for a reliever. That performance set the tone for an eventual Valpo sweep of Southern Illinois in Missouri Valley Conference play.

Rhodehouse was one of three pitchers named National Players of the Week by Collegiate Baseball Newspaper and the only reliever to receive recognition as he joined West Virginia’s Alek Manoah and Ball State’s John Baker. In addition, he became the first Valpo athlete to win MVC Pitcher of the Week honors since the program joined the conference prior to the 2018 season. He was Valpo’s second Valley weekly award winner as Sam Shaikin won a Player of the Week award last season.

Rhodehouse also accounted for Valpo’s most recent Pitcher of the Week award in any conference when he was named the Horizon League Pitcher of the Week on May 15, 2017 after retiring all 12 batters he faced over four scoreless innings in a 7-6 win over UIC.