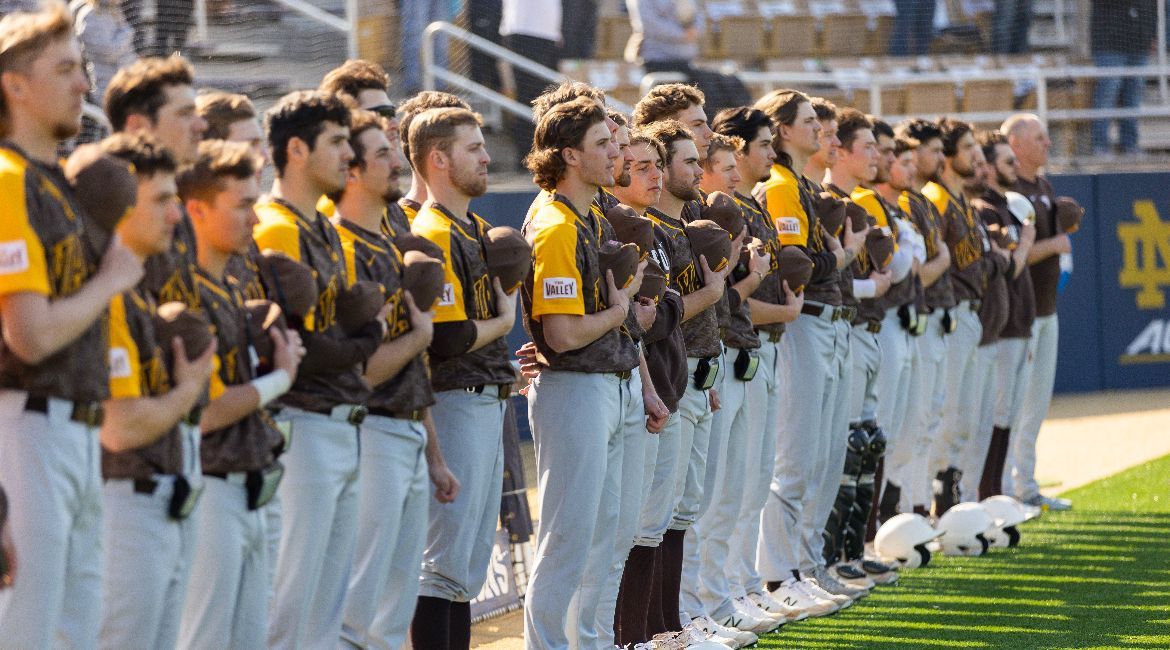 Next Up in Valpo Baseball: A week after taking on the team projected to win the Ohio Valley Conference, the Valparaiso University baseball team will battle the squad picked second in the OVC this weekend as the Beacons make their way to Murray, Ky. to take on Murray State. This nonconference series will serve as a preview of future Missouri Valley Conference showdowns as Murray State will join the MVC, effective July 1.

Last Time Out: Valpo’s last four games have come against high quality competition, as the Beacons dropped all three in a weekend series at SEMO, a team projected to win the Ohio Valley Conference for the second straight year, before falling 12-1 at No. 6 Notre Dame, a team ranked as high as No. 1 nationally by Baseball America and Perfect Game. Kyle Schmack had two hits including a home run, while Connor Lockwood and Grant Jablonski had solid showings out of the Beacon bullpen. Jablonski was a bright spot, working two scoreless innings of one-hit ball against the Fighting Irish.

Following the Beacons: The games this weekend at Murray State are slated to air on ESPN+. Links to live video and stats will be available on ValpoAthletics.com.

Head Coach Brian Schmack: Brian Schmack (157-242), the 17th head baseball coach in Valparaiso University history, is in his ninth season in charge of the program. Entering the 2022 campaign, he has served as the head coach for 387 games at Valpo, the fourth-most in program history with Tracy Woodson third at 397. This year, he moves into sole possession of third in program history for number of seasons coached with nine, surpassing Donald Warnke (1946-1953). Entering the season, Schmack’s win total of 152 ranks fourth in program history after he surpassed Rick Ferchen (1982-1987, 147) during the 2021 campaign. Also in 2021, Schmack joined Paul Twenge (1988-2006), Emory G. Bauer (1954-1981) and Tracy Woodson (2007-2013) as the only head coaches to reach the 150-win threshold. The former big-league pitcher led Valpo to 25 wins in his inaugural campaign in 2014, a school record for victories by a first-year skipper. Schmack, a member of the 2003 Detroit Tigers, served as pitching coach/associate head coach at Valpo for seven seasons prior to his promotion.

Talking Schmack: Head coach Brian Schmack moved into third in program history in career games coached on March 13 at SEMO. He enters the series opener at Murray State having skippered 399 Valpo games. Schmack’s predecessor, Tracy Woodson, was at the helm for 397 contests. During the first game of this weekend’s series, Schmack will become the third head coach in program history to work 400 games, joining Paul Twenge (1988-2006, 1011) and Emory G. Bauer (1954-1981, 606).

Series Notes: Valpo and Murray State have faced off four times prior to this weekend with the two teams splitting those matchups. Valpo went to the state of Kentucky and won two of three to begin the 2012 season in a series where all three games were decided by three runs or fewer. That started a season that culminated with a Horizon League title and NCAA Regional appearance. The only other meeting occurred in 1994, a 5-3 loss for Valpo as part of the Derby City Classic in Louisville, Ky.

Hannahs Starts Hot: Hannahs has produced multiple hits in seven of his first 12 games this season. In addition, he has already racked up four three-hit contests, two of which came as part of a six-hit doubleheader on March 13 at SEMO. The sophomore third baseman ranks third in the Missouri Valley Conference in batting average at .422 and second in on-base percentage at .509 while also ranking second in slugging percentage at .756. He has drilled four home runs in 11 games this season, surpassing his season total of three from his entire rookie campaign (51 games). Prior to a rare hitless game on March 15 at No. 6 Notre Dame, Hannahs had reached base safely in 10 consecutive games.

Sophomore Jump: Hannahs isn’t the only Beacon who has avoided the sophomore slump, as Alex Thurston is off to a stellar start to his sophomore season. Thurston’s year has featured a jump rather than a slump as he has boosted a .158 batting average from last season to .375 in 2022 (currently seventh in the MVC). Thurston is reaching base at a .432 clip after he finished his freshman season with a .284 OBP. Entering Friday at Murray State, Thurston possesses a 10-game hitting streak. On March 15 at No. 6 Notre Dame, he became the first Valpo player with a double-figure hitting streak this season after two did so a year ago (Kyle Schmack and Kaleb Hannahs).

Strikeout Success: Colin Fields struck out eight in just 3 1/3 innings in the second game of the March 13 doubleheader at SEMO, lifting his season total to 33 and his career total to 183. He has struck out seven or more in all four of his starts this season. Fields leads the MVC in strikeouts this year. He is just 17 away from becoming the 12th pitcher in program history to reach 200.

Close Calls Continuing: Last season, Valpo competed in 15 one-run games, posting a 7-8 mark in such contests. The team had 10 affairs decided by the slimmest of margins in Missouri Valley Conference play alone. This year, the trend of close games has continued. Half of Valpo’s first 12 games have been decided by two runs or fewer, with the Beacons holding a 4-2 mark in those outings.

Strong Start: The start of the season is never easy for Valpo, a cold-weather team that begins the calendar each year with a lengthy string of road games, mostly against warm-weather competition. This year, Valpo withstood those early-season challenges to put together the program’s best record through eight games since 1999. That season, Valpo also started 5-3, but had the benefit of starting the season with five neutral-site games in Florida. This year, the Beacons have played exclusively true road games. Prior to dropping all three March 12-13 at Ohio Valley Conference preseason favorite SEMO, Valpo had won five of its previous six games, a stretch that included the program’s first four-game winning streak since late in the 2019 season against Southern Illinois and Chicago State. This year’s four-game winning streak was the program’s longest that came in all true road games since March 2014 (two at Texas A&M CC, one at Chicago State, one at UIC).

In the Other Dugout: Murray State