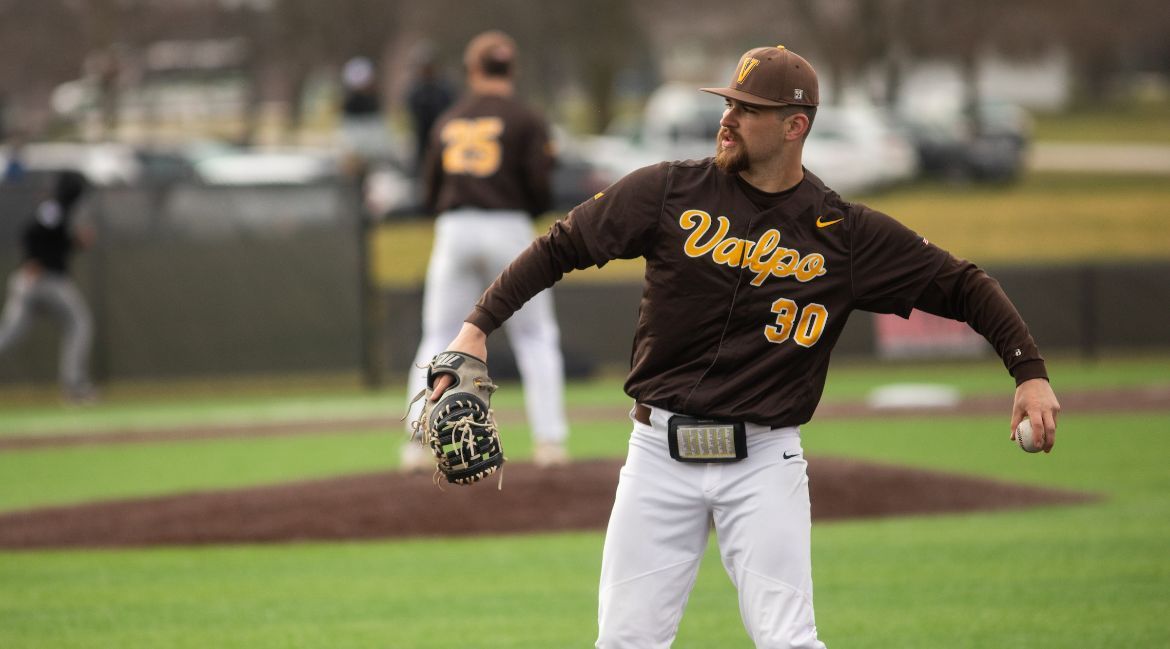 
Next Up in Valpo Baseball: The Valparaiso University baseball team will have one final tune-up prior to Friday’s Missouri Valley Conference opener as the Beacons continue a stretch of six straight games against Horizon League members with a doubleheader on Tuesday against Milwaukee in Franklin, Wis. Both games will be seven innings in length and the second game is a makeup of a contest that was originally slated for Emory B. Bauer Field earlier this season.

Last Time Out: After dropping the series opener 9-7, Valpo rallied for a road series win at UIC by taking two of three from the Flames in the final nonconference weekend. The Beacons prevailed 8-3 in the nightcap of Friday’s doubleheader before coming away with a 5-2 victory in Sunday’s rubber match. Colin Fields and Jake Miller each delivered outstanding pitching performances in the final two games as the pair now owns a combined record of 7-0 this season. Kyle Schmack reached base 10 times in Friday’s doubleheader and made an impressive catch while crashing into the left-field fence.

Following the Beacons: Links to live audio and stats will be available on ValpoAthletics.com. There will be no video feed available for Tuesday’s games. For in-game updates, follow @ValpoBaseball on Twitter.

Head Coach Brian Schmack: Brian Schmack (163-246), the 17th head baseball coach in Valparaiso University history, is in his ninth season in charge of the program. This year, he moves into sole possession of third in program history for number of seasons coached with nine, surpassing Donald Warnke (1946-1953). Entering the season, Schmack’s win total ranks fourth in program history after he surpassed Rick Ferchen (1982-1987, 147) during the 2021 campaign. Also in 2021, Schmack joined Paul Twenge (1988-2006), Emory G. Bauer (1954-1981) and Tracy Woodson (2007-2013) as the only head coaches to reach the 150-win threshold. The former big-league pitcher led Valpo to 25 wins in his inaugural campaign in 2014, a school record for victories by a first-year skipper. Schmack, a member of the 2003 Detroit Tigers, served as pitching coach/associate head coach at Valpo for seven seasons prior to his promotion.

Series Notes: Valpo and Milwaukee have matched up 72 times over the years with the Panthers holding a 39-33 advantage. The two teams last played in 2018, and Valpo prevailed 23-5 behind the program’s highest run total in eight years. A seven-run first inning explosion set the tone, and Valpo enjoyed another seven-run frame in the sixth. Jayden Eggimann launched a grand slam and racked up seven RBIs. Valpo owns a five-game head-to-head winning streak that started with a 12-7 victory in the 2016 Horizon League semifinals. The two teams shared conference affiliation in the Horizon League for a decade.

.500 Through 22 Games: Wins are always hard to come by early in the season for a cold-weather team playing a slew of road games against warm-weather opponents, but this year Valpo has weathered that storm by posting an 11-11 record over the team’s first 22 games. This marks the programs best record at this point in the season since 1998. If Valpo can secure at least a split of Tuesday’s twinbill at Milwaukee, the team will enter conference play with a record of .500 or better for the first time since 2014.

Extinguishing the Flames: By going on the road and winning two of three from April 1-3 at Curtis Granderson Stadium in Chicago, Valpo earned a series win over UIC for the first time since 2012. The victories came over a quality program that won 30 games last season. Furthermore, Valpo won the series despite dropping the series opener, the first time Valpo rallied to win a series after losing the opener since May 2015 vs. Youngstown State.

Fields Cracks Program’s Top 10: After becoming the 12th player in program history to reach 200 career strikeouts on March 25 at St. Bonaventure, Valpo starting pitcher Colin Fields unlocked another achievement on April 1 at UIC, cracking the program’s career top 10. He did so in resounding fashion, fanning a career-high 13 to usurp Chuck Donley (212, 1991-1995) for 10th in program history. Furthermore, the 13 strikeouts marked the most by a Valpo pitcher in a single game since April 12, 2011, when Jon Gulbransen reached that same number in a game against Chicago State. He earned the victory over the Flames to improve to 4-0 this season.

Not Fooling Around: Valpo left fielder Kyle Schmack had a monster day at the plate during the April 1 doubleheader at UIC, reaching base 10 times over the two games. He had six total hits in addition to three walks and one HBP. In addition, Schmack turned in a web gem in left with a crucial catch while slamming into the fence in the eighth inning of the Game 2 victory.

A Look at the Leaderboards: Several Valpo players rank among the national and conference leaders in a variety of statistical categories. With a remarkable ratio of 41 strikeouts against just three walks in 27 innings, left-handed pitcher Jake Miller leads the Missouri Valley Conference and ranks eighth nationally in strikeout-to-walk ratio at 13.67. Fields leads the nation in strikeouts per nine innings at 16.40, while ranking ninth nationally in total strikeouts with 65. Fields also ranks second in the MVC in opponents’ batting average at .189 and fifth in ERA at 3.03. Bobby Nowak is 16th in the nation and tied for the MVC lead with six saves. Valpo catcher Angel DiFederico has caught 10 would-be base stealers and has caught the most runners of any catcher in the MVC. As a team, Valpo is 16th nationally in strikeouts per nine innings (11.0) and 36th in strikeout-to-walk ratio (2.82), leading the MVC in both areas. Kyle Schmack ranks among the league leaders in batting average (.368, eighth), slugging percentage (.575, 13th) and on-base percentage (.461, seventh).

Other Notes Wrapping Up UIC (April 1-3)

In the Other Dugout: Milwaukee

Game 1 Pitching Probable: #38 RHP Griffin McCluskey, So. (Normal, Ill. / Normal Community) – Pitched in nine games and made two starts as a freshman in 2021... Made his first career start on April 27 at No. 8 Notre Dame... Also got the starting nod on May 11 vs. the No. 8 Fighting Irish and pitched a gem at Emory G. Bauer Field, holding the guests to no runs on one hit – a seeing-eye single through the left side – while walking just one and striking out four in six innings. He left in position for the win after becoming just the third pitcher to hold Notre Dame scoreless while pitching six or more innings all season, joining Duke’s Jack Carey and Boston College’s Emmett Sheehan... Posted the highest fielding percentage by a starting shortstop in program history in high school... Finished in the top 10 in his high school’s history in career 3-point field goals in basketball... Enjoys playing the guitar... Pitched a scoreless inning in his season debut on March 4 at Omaha... Pitched an inning and allowed one run on one hit (a solo homer) on March 29 vs. Purdue Fort Wayne... Slated to make his first start of the season on Tuesday at Milwaukee.

More From the Whiff Wire: Prior to this season, Valpo pitchers had not struck out 17 or more batters in a single game since 2011. This year alone, that feat has been achieved three times – March 5 at Omaha and both games of a March 25 doubleheader vs. St. Bonaventure. In Game 1 of that double dip, starter Trent Turzenski became the first Valpo hurler to rack up a dozen strikeouts in a game since Jon Tieman on April 19, 2019 at SIUE. Prior to that, no Valpo pitcher had struck out 12 since Jon Gulbransen in 2011. In Game 2 of the April 1 doubleheader at UIC, Valpo pitching accrued 16 strikeouts, the fourth time this season the staff has struck out 16 or more.