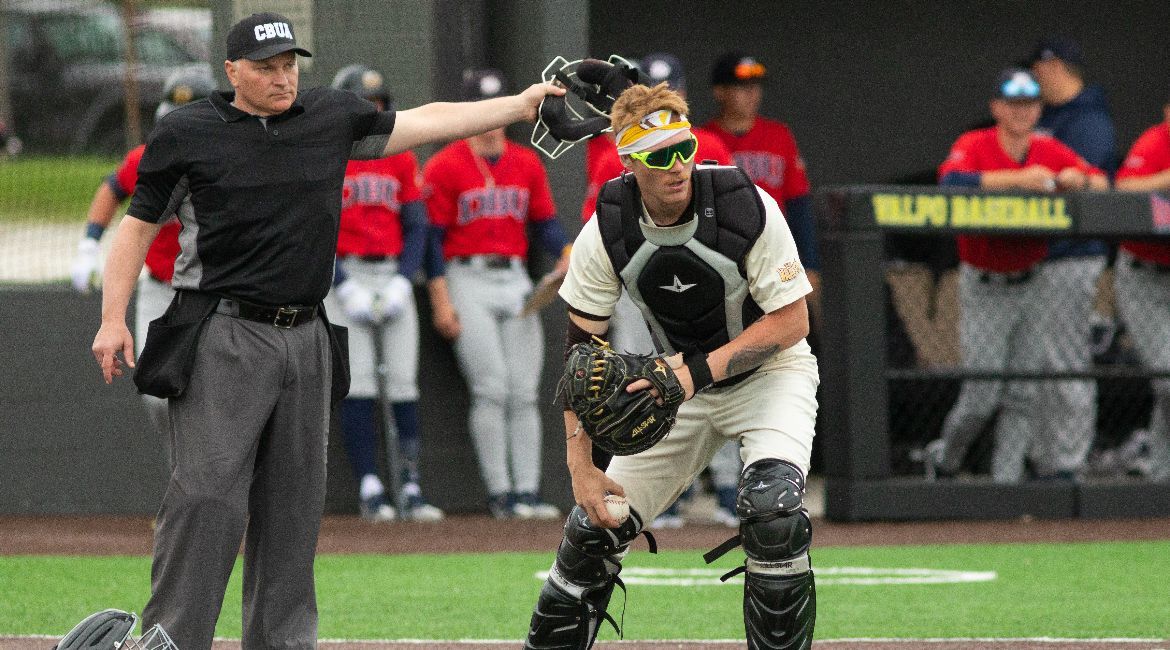 Next Up in Valpo Baseball: The final home weekend of the season is upon us as the Valparaiso University baseball team will welcome in Bradley for a three-game weekend series that gets started on Friday afternoon at Emory G. Bauer Field. The series will culminate with Senior Day on Sunday as the program recognizes five senior players and two senior managers. Catcher Jake Kapers, outfielder Jeremy Drudge, RHP Colin Fields, LHP Keegan Bates and RHP Zach Fricke will be celebrated on the field prior to Sunday’s contest. In addition, four-year student managers Sam Miller and Evan Smith will be part of the Senior Day recognition. A busy weekend will also feature a Valpo baseball alumni event with a number of players from the program’s past planning to be in attendance on Saturday.

Recently in Valpo Baseball: Valpo played competitive baseball against a top-10 RPI opponent, but visiting Dallas Baptist came out on top in all three contests last weekend at Emory G. Bauer Field. The Patriots, who are well positioned to earn an at-large NCAA Regional berth if they do not secure the league’s automatic bid, came into Northwest Indiana and swept Saturday’s doubleheader with 5-1 and 3-0 wins. The guests completed the series sweep with an 8-3 victory on Sunday. Valpo got strong pitching during Saturday’s twinbill, but ran into a DBU team with a stellar pitching staff of its own.

Following the Beacons: No ESPN3/+ broadcast will be available for this weekend’s games. The Friday game of the series will have a radio broadcast on WVUR, the final Valpo broadcast for Garrett Willis. For in-game updates, follow @ValpoBaseball on Twitter. A link to live stats will be available on ValpoAthletics.com.

Head Coach Brian Schmack: Brian Schmack (166-263), the 17th head baseball coach in Valparaiso University history, is in his ninth season in charge of the program. This year, he moves into sole possession of third in program history for number of seasons coached with nine, surpassing Donald Warnke (1946-1953). Entering the season, Schmack’s win total ranks fourth in program history after he surpassed Rick Ferchen (1982-1987, 147) during the 2021 campaign. Also in 2021, Schmack joined Paul Twenge (1988-2006), Emory G. Bauer (1954-1981) and Tracy Woodson (2007-2013) as the only head coaches to reach the 150-win threshold. The former big-league pitcher led Valpo to 25 wins in his inaugural campaign in 2014, a school record for victories by a first-year skipper. Schmack, a member of the 2003 Detroit Tigers, served as pitching coach/associate head coach at Valpo for seven seasons prior to his promotion.

Series Notes: Valpo holds a 15-20 record over 35 all-time matchups with the Braves in a series that began in 1991. The two teams split a four-game set in Peoria a year ago. The last time Bradley visited Emory G. Bauer Field, the Braves won two of three in Valpo’s first-ever MVC series. A walk-off home run by Zack Leone in the bottom of the 10th helped the Brown & Gold win the middle game of the series. Valpo is 4-8 against Bradley since joining The Valley.

Tucker’s Tear: Second baseman Nolan Tucker has been on an offensive tear of late, leading to him being named the Missouri Valley Conference Player of the Week on Monday, May 2.  Tucker posted a robust .667 batting average in a three-game weekend series at Southern Illinois and an overall average of .563 over four games that week. He went 8-for-12 in a road series with the Salukis while driving in four runs and scoring three times. Three of his eight hits in the series went for extra bases. Entering the final home series vs. Bradley, Tucker ranks among the Missouri Valley Conference leaders in batting average (.375, fourth) and on-base percentage (.437, eighth) and leads the team in both categories. In MVC-only action, he owns a .389 batting average that ranks fourth in the league. This marks a noteworthy turnaround for Tucker, who entered the season as a .188 career hitter over two injury-riddled seasons. Weekly awards can be hard to come by in such a strong baseball conference, as this marks the team’s first weekly award of the season and just the third Player of the Week honor since joining The Valley (Sam Shaikin, Kaleb Hannahs).

In the Other Dugout: Bradley

Seeking Support: Since the injury to Trent Turzenski that prompted Colin Fields to be moved to Game 1 in the weekend rotation, Valpo has scored only one run of support during Fields’ four starts. In part due to facing off with the aces of other MVC teams, Fields has had tough luck in terms of run support. Valpo has scored just one run (a solo homer by Kyle Schmack against DBU) in his last 28 innings on the mound.

Fields on the Single-Season Strikeout List: Colin Fields struck out eight on May 7 vs. DBU, his 11th time in 12 starts with seven strikeouts or more this season. That lifted his season strikeout total to 99. With his next strikeout, Fields will become the first Valpo hurler to rack up 100 strikeouts in a single season since Bryce Shafer in 2010. To crack the top five in single-season program history, he needs to get to 103 strikeouts for the season. Three of the current top five single-season strikeout totals in program history came in 1972 or earlier.

Fields on the Career Strikeout List: After becoming the 12th player in program history to reach 200 career strikeouts on March 25 at St. Bonaventure, Valpo starting pitcher Colin Fields unlocked another achievement on April 1 at UIC, cracking the program’s career top 10. He did so in resounding fashion, fanning a career-high 13 to usurp Chuck Donley (212, 1991-1995) for 10th in program history. Furthermore, the 13 strikeouts marked the most by a Valpo pitcher in a single game since April 12, 2011, when Jon Gulbransen reached that same number in a game against Chicago State. Fields turned in another gem to start MVC play on April 9 vs. Indiana State, logging six scoreless innings of five-hit ball while striking out eight. He now has 249 career strikeouts, a number that ranks seventh in program history. During Valpo’s May 7 game vs. DBU, Fields passed his former teammate Jon Tieman on the career strikeout list. With his next strikeout, fields will tie Bryce Shafer for sixth in program history. He needs four more to crack the top five.

Five-Hit Output: Alex Thurston posted five hits in the April 29 series opener at Southern Illinois, becoming the first Valpo player with a five-hit game since Scott Kapers on May 8, 2018 at Western Michigan. Thurston became just the third Beacon with four or more hits in a game this season, joining Kaleb Hannahs and Nolan Tucker. The following day, in the April 30 middle game at SIU, Tucker lashed out four hits and was a homer away from the natural cycle after recording a single, double and triple in that order in his first three plate appearances. Tucker became the first Beacon with multiple four-hit games this year.

Nowak Nailing It Down: Bobby Nowak nailed down his eighth save of the season in the 11-10 victory at Southern Illinois on May 1, moving to within one save of cracking the single-season Top 5 in the program record book. Nowak now owns Valpo’s highest single-season save total since 2014, when Karch Kowalczyk had 11. In addition, Nowak now ranks tied for ninth in program history in career saves despite being in his first season at Valpo. Entering the final home weekend vs. Bradley, Nowak is tied for the MVC lead with eight saves, joining DBU’s Chandler Arnold.

200-Hit Pace: Sophomore Kaleb Hannahs collected his 100th career hit during the April 23-24 series against Missouri State, putting him well on pace to reach the 200-hit milestone by the end of his collegiate career. If he eventually reaches that threshold, he would become just the 11th player in program history and first since Spencer Mahoney in 2015 with 200 career hits. Chase Dawson came close in 2019, but finished his career with 199 hits. Hannahs reached the 100-hit milestone during Saturday’s doubleheader vs. Missouri State, when he had two hits in each game. Kyle Schmack, also a sophomore in terms of eligibility but in his third year in the program due to the COVID year, achieved his 100th career hit on April 30 at SIU.