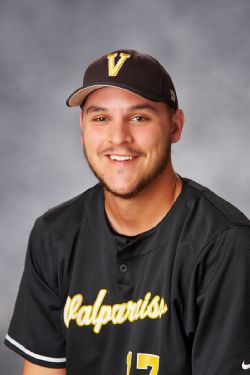 2014: Pitched in 17 games for Valpo in his junior season...rebounded well from a rough opening weekend at Samford by putting together a streak of eleven consecutive scoreless innings that began on Feb. 23rd and ended on Apr. 26...earned the win at Texas State (Mar. 5) after throwing two innings of one-hit baseball...helped preserve a 5-1 Crusader victory in his next appearance at Texas A&M-Corpus Christi, chucking a shutout frame against the Islanders...struck out a pair of Huskies in 1 1/3 innings of relief against Northern Illinois on Apr. 2nd...blanked the Ohio Northern Polar Bears for two innings on Apr. 22nd...closed the season out by tossing two hitless innings against Youngstown State (Nay 17) at the Horizon League Championships in Mequon, Wisconsin.

2013: Appeared in 26 games - all in relief - for the Crusaders...earned the win over St. Bonaventure (Mar. 2) after hurling three innings and yielding just one run while striking out four...got the win in his next appearance against Villanova (Mar. 5) when he threw a scoreless frame and recording a strikeout...notched a save against Bucknell (Mar. 14) after not allowing a hit in 1 1/3 innings of work...had an eight-game scoreless streak spanning over 14 innings from April 6th-May 4th...tallied his third win of the season thanks to three perfect innings versus Western Michigan (Apr. 30)...struck out three batters in two perfect frames versus Youngstown State (May 16)...worked a spotless 8th inning in Valpo's NCAA Regional opener versus #13 Indiana (May 31)...finished season 3-3 with a 3.11 ERA and two saves...opponents hit just .240 off him...threw 37 2/3 innings, allowed 35 hits and struck out 29 batters.

2012: Made three starts and appeared in 13 games out of the pen...was the winning pitcher on Opening Day against Murray State hurling three scoreless innings, striking out two in the Feb. 17th 5-2 victory...recorded 2 1/3 perfect innings against #4 Arkansas on Feb. 25th...made first collegiate start against South Carolina-Upstate on Mar. 5th and scattered four earned runs over six innings of work in the losing effort...threw two scoreless innings of relief on Mar. 14th versus Belmont...worked three scoreless innings against Indiana State on Apr. 17th...registered two scoreless frames against Notre Dame on May 2nd in a 7-4 win over the Fighting Irish...recorded five innings of shutout ball in a mid-week start against North Central on May 8th, earning his second win of the season in the process...retired all four batters he faced against Purdue in the NCAA Regional June 1st...walked a total of four batters over 38 innings of work while posting a 3.79 earned run average.

Prep: A three-year letterwinner for the Mustangs ... All-North Suburban Conference selection as a senior ... earned All-State honors as a senior ... named Mundelein McDonald’s Athlete of the Year in 2011 ... also lettered in basketball.