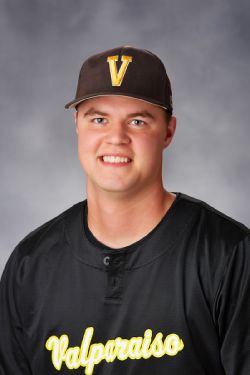 2013: Sat out the season with a medical redshirt.

2012: Played in 21 games, 15 of which were starts...recorded a 3-for-4 day with a double, a walk, two RBI, and a run scored against Butler on Mar. 17th in his first collegiate start at DH...hit his first career home run against Grace on Apr. 9th part of a 2-for-4 game with four RBI and two runs scored...his dramatic three-run home run to right field against IPFW capped a four-run 9th inning comeback en route to an 11-8 win over the Mastodons on Apr. 24th...went 2-for-5 with an RBI and a run scored against North Central on May 8th...his two home runs were tied for the team lead with five other Crusaders but was accomplished in just 61 at-bats.

Prep: A two-year letterwinner for the Panthers ... an All-Summit Athletic Conference utility player selection .... led team to a 4A state championship in Indiana ... team batting champion as a senior at .456 ... a member of National Honor Society ... also lettered in football and basketball.

Personal: Grant is the son of Don and Shelley Yoder ... no relation to teammate Bryce ... worked youth baseball camps and performed community service at Youthville in conjuction with the Dodge City A's during the summer of 2012 ... favorite movie is The Godfather ... favorite baseball team is the New York Yankees ... favorite food is chicken wings ... favorite musical group is Nirvana ... favorite baseball player is Giancarlo Stanton ... major is kinesiology ... born Oct. 16, 1992 ... away from baseball he enjoys hanging out with friends, weight lifting, and watching movies and television.