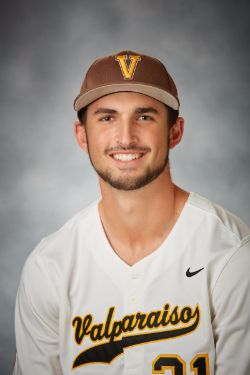 2016: Made nine starts over 11 appearances with the Crusaders as a junior...finished the season 2-2 with a 4.12 earned-run average...threw a scoreless inning in the series finale at Jacksonville State (Feb. 21)...limited ULM to two runs over three innings in his first start of the 2016 campaign on March 1...turned in a quality start at Dallas Baptist (March 9), but did not factor into the decision after yielding three runs to the Patriots over six innings...limited Ball State to one earned run in 5.1 innings of work, lowering his ERA to 3.31 in the process...surrendered three runs over 4.1 frames at Notre Dame (April 13)...saddled with a tough-luck loss against Northern Kentucky after the Norse plated seven unearned runs in six innings versus the righty...earned his first win of the season in the second game of a doubleheader versus Oakland (May 15), shutting out the Golden Grizzlies over eight innings, allowing just four hits - all singles - and punching out six...shined when the Crusaders needed him most, dispatching UIC in an elimination game of the Horizon League Championship, limiting the Flames to two runs on five hits over seven stellar frames.

2015: Appeared six times including three starts in his sophomore campaign with Valpo...earned his first win of the season after firing 5 1/3 innings of one-run ball at Western Carolina (Mar. 2) where he struck out four and walked just two...scattered two singles in 1 2/3 scoreless frames against UIC (Mar. 13)...took a tough-luck loss against Purdue (March 18) in a start in which he surrendered two runs on six hits in 6 2/3 innings while striking out three and walking only one in a 2-0 defeat...was rewarded with the W after he did not walk a batter during seven innings of two-run ball in the Crusaders' 7-2 win at Chicago State on March 25.

2014: Made 14 appearances including 11 starts in his first season with the Brown and Gold...finished 4-6 with a 4.88 ERA, striking out 41 batters while walking just 15 in 72 innings pitched...was dazzling in his first start on March 5 at Texas State, limiting the Bobcats to one earned run on four hits over seven innings...claimed his first collegiate victory on March 18 at Chicago State as he surrendered only one run on three hits in six innings of Valpo's 7-1 win...fired seven innings against Oakland (May 4), yielding three earned runs on eight hits while striking out four Golden Grizzlies opposite one walk to earn the win...had a career day at Wright State on April 11, registering a six-hit shutout with 11 Ks...kept Valpo alive in the Horizon League Championship against UIC, spinning off eight shutout innings en route to his fourth win of the season...did not give up a home run in 72 innings on the hill...crafted a 3-0 record along with a 1.29 earned run average in the month of May.

2013: Received a medical redshirt in his freshman season.